With the election three weeks away, PRWeek asked ten senior lobbyists to predict the largest party and the number of seats won by that party.

Nine of the ten predicted that the Tories would win the most seats - but only five indicated that they expected the party to achieve outright victory on 6 May.

Bell Pottinger Public Affairs chairman Peter Bingle was most optimistic about David Cameron's chances. His prediction of 352 seats for the Tories would translate to around 42 per cent of the vote for the party - and a healthy majority of 54.

Rory O'Neill was the only lobbyist to envisage Labour emerging from the election as the biggest party. The Gardant Communications partner said he was sticking with the prediction he made to PRWeek back in January 2009, when he was the only one of the same ten-strong panel to predict a Labour election victory.

Andrew Hawkins, CEO of pollsters ComRes, said: ‘Lobbyists are split almost as much as pollsters over whether the Tories will get a majority. Half think yes, four in ten think no and one diehard reckons Lab-our will be the largest party.

‘If lobbyists are proved correct it means a Conservative lead of between four and 14 per cent on polling day, or a swing to Labour of between three and 8.5 per cent. Any of these are plausible but my money is on a result in the vicinity of the Redfern-Lewington-McMillan estimates.'

Back in 2008, the same ten lobbyists agreed to predict the mayoral election outcome, with seven predicting a victory for Ken Livingstone. 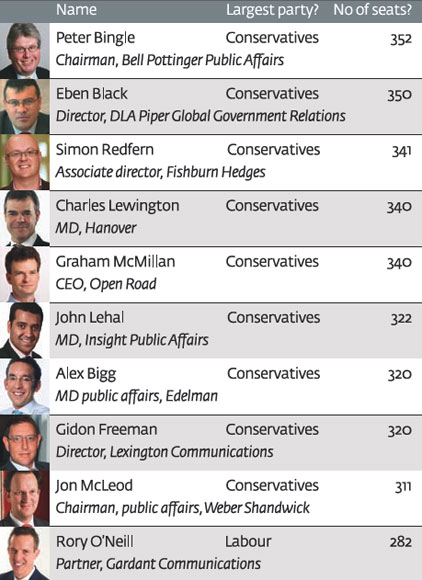