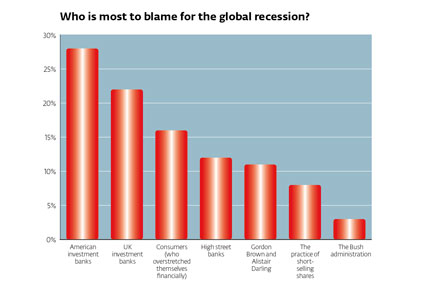 The British public overwhelmingly blames the banks and bankers for the deep global recession, new figures have confirmed.

PRWeek's exclusive survey, carried out by research agency OnePoll, of 3,000 members of the public, found 72 per cent of people blamed irresponsible corporations and individuals for the financial turmoil. And despite the slump in politicians' reputations and the fact consumers as a group have all suffered, it is investment banks that people blame first and foremost, closely followed by high street banks.

Forty-one per cent of respondents no longer trust banks. And more worryingly for the financial community, the public wants greater regulation of banks and deplores the bonuses awarded to those within the profession.

The challenge now is for banks to rebuild their tattered reputations. It may be too late for them to completely recover, if the public desire for greater regulation is enforced.

'If there was one thing not in short supply during the financial crisis, it would be blame,' says Gay Collins, chief executive of Penrose Financial.

'Politicians blamed banks, banks blamed regulators and everyone blamed Sir Fred Goodwin. What is important now is that all parties learn from their mistakes and procedures are put in place. Banks must work hard to regain public trust.

People rightly blame the bankers for the major part they played in the recession and the disproportionate remuneration of a small minority easily stirs visceral emotions.

Banks allowed the public opinion battle to be chosen for them; they should have taken a more visible lead in fixing the system and shown how they are essential to sustainable recovery. Not all should be lumped together and it is reassuring that the public does distinguish clearly between high street banks and investment banks - although it is the former that were bailed out with public money.

I am surprised that policymakers don't get more of the blame in the survey. But they are successfully deflecting it with populist rhetoric and proposals that bankers believe address not the real but the more arcane issues that will make the financial system safer. 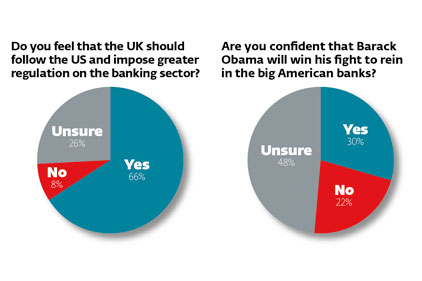 89% are disgusted that Goldman Sachs bankers were receiving a bonus of at least £300,000 each while most workers suffered the effects of the recession

They agree that Gordon Brown was right to impose a 50 per cent tax rate on bankers' bonuses over £25,000