The technology top 40 table reveals 2008 was a mixed bag for the big players in the sector.

Some agencies, in particular Edelman and Brands2Life, posted booming tech PR incomes and a number of agencies reported double-digit growth figures. Edelman grew by an astonishing 51 per cent to take the top spot, thanks to an excellent year and winning the lucrative Hewlett-Packard account.

However, several others including Text 100 UK, Inferno Communications and Trimedia earned less from tech accounts in 2008 than they did in 2007. Out of the top ten agencies, only four actually grew in the tech field in 2008.

The recession was certainly to blame for most, though not all, of the losses posted.

Hotwire's tech fee income declined by six per cent compared with 2007. The agency said the loss was because it transferred clients and staff to its sister agency Skywrite Communications. Without this, the agency's income would have grown by four per cent.

The tech sector is more clearly aligned with the US economy than other UK markets, so it felt the bite earlier than other sectors. Several agencies reported clients were forced to make budgets cuts last year.

The economic crisis did bring some gloom to 2008, but it was still an exciting time for technology PR. Digital has become a hot topic across the PR world, but it is the tech agencies that have embraced opportunities most readily - after all, tech PR professionals have the expert knowledge to lead the way. Giles Fraser, co-founder of Brands2Life, says the tech PR sector has always been at the forefront of the digital revolution. 'Clients expect us to understand the technology,' says Fraser.

Another exciting development for 2008 is the number of new names that have cropped up. Mi liberty, Chameleon PR and Napier Partnership are all new entries. Notable exceptions from this year's table are Metia and Bite, last year's number one and number three respectively. Both declined to enter this year's Top 150 league tables. Bite has since merged with fellow Next Fifteen agency Inferno - which saw tech fee income drop by 15 per cent since 2007. 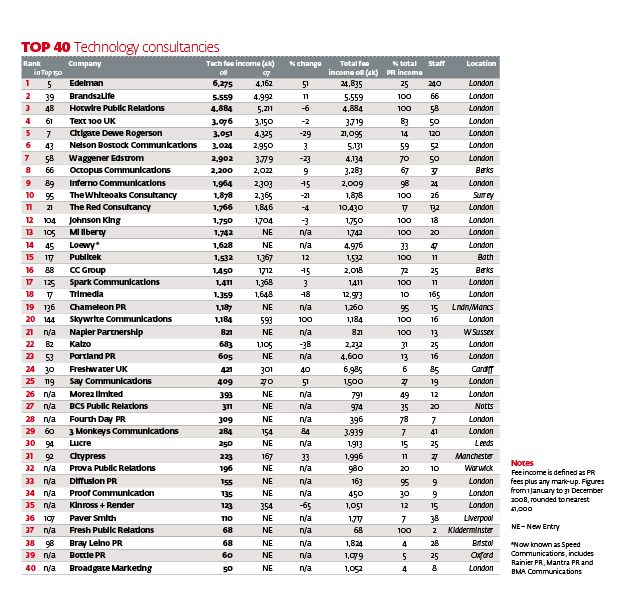 Client demand for digital media work continued apace in 2008. Tech agencies invested heavily by training staff, hiring digital experts and bringing in external digital gurus. Agencies say digital was an area in which they needed to keep up to date. 'Everyone is learning as they go along,' says Brands2Life's Fraser. 'Anyone who says they know everything is lying.'

The popularity of social media networks such as Twitter is one reason for the growing importance of digital PR. Another reason is what Kristin Syltevik, MD of Hotwire, calls the 'Googlisation' of PR. 'It is becoming a tool companies use to improve their SEO,' she says. Companies can improve their SEO - search engine optimisation - rankings if there is more information available about them on the web, such as press releases and website content.

The agency ran blogs, managed Twitter accounts and created vodcasts. Stewart-Muir says: 'Existing clients have seen more value in social media, which is why they entrust us to do more.'

The digital space will continue to be a priority for tech agencies in 2009. This year Hotwire launched its own digital agency 33 Digital, which counts Debenhams and ft.com among its clients. Mi liberty, which has a digital marketing arm, is also considering launching a stand-alone digital PR agency. However, the rush to get online does not mean digital is replacing traditional PR techniques or that traditional PR is no longer needed, says Mi liberty MD Dee Gibbs. 'Digital is not the be all and end all,' she adds.

Despite budget cutbacks, 2008 was a year of interesting new campaigns and clients across the tech sector.

Octopus won a massive account with Cisco to handle its PR in the UK and Ireland. Jon Lonsdale, MD of Octopus, says 2008 provided great opportunities for smaller agencies. The agency developed a global partner network and won a global account with Finnish e-invoicing company Basware. 'Before, it was only global agencies that could work on global clients,' he says. 'Now clients are looking to have UK lead agencies for global accounts and they can work with small agencies.'

For Edelman a high point of 2008 was winning a lucrative Hewlett-Packard IPG account. Jonathan Hargreaves, Edelman's European MD for technology, says the strategic brief went beyond traditional PR and revolved around social media. Edelman also worked on a social media brief for security brand Symantec. The agency promoted its Norton Anti-Virus software with a campaign that asked people to reveal their online security heroes.

Some agencies took the opportunity to branch out in 2008. Mi liberty has made its mark working for mobile brands such as the GSM Association, which it represents for Mobile World Congress. This year the agency decided to move into the financial software and enterprise IT sectors. Hotwire too decided to widen its remit by founding a corporate practice. Syltevik says tech agencies are now expected to perform multiple services including digital, corporate and consumer PR.

RECESSION - SURVIVAL OF THE FITTEST

Though tech clients continue to reduce PR budgets, agencies are keen to focus on the positive. Lonsdale of Octopus says client feedback in November and December 2008 had prepared him for the worst, but so far this year has been shaping up well. 'The number of new business pitches is encouraging and we're seeing companies that are looking to invest in PR for the first time,' he says.

There are some positive outcomes of the recession. Edelman's Hargreaves says the economy has been driving innovation and tech start-ups have been cropping up.

Agencies looking to hire also have a wealth of talent to choose from and people are more serious about their careers. 'A year ago it was really tough to find good people not established in an agency,' he says. Another bonus of the tough economic climate is that PR has the opportunity to prove its necessity. 'The downturn has been good for making us justify what we do,' says Hargreaves.

Fraser of Brands2Life agrees that PR is considered a good area on which to spend. 'Companies will drop other marketing streams before PR,' he says. Within the tech sector some budgets are more secure than others. 'Some areas have stopped spending,' says Fraser. 'Others, such as cloud-computing, are buoyant.'

Fraser says the key is for agencies to ensure they have expertise in different sectors. Among tech agencies the consensus is that 2009 will be a tough year. Consolidation is set to be a key trend with large companies expected to reduce the number of agencies handling their accounts. Lonsdale says this consolidation will cause agencies that do not have expertise outside tech to struggle. He predicts that as people become more tech-savvy, more brands will choose to work with generalist consumer agencies.

'We'll see fewer names on the league table next year,' he says. Agencies have begun to consolidate, as demonstrated by Bite Communications joining forces with Inferno Communications and Loewy merging its agencies into the brand Speed Communications.

Several sectors within technology are set to be pivotal areas in 2009. Cloud-computing remains a hot topic, as does clean-tech. Edelman's Hargreaves says sustainable IT will be big and Edelman has already ventured into this area through its work with Hewlett-Packard on recycling. Most agencies agree mobile will do well, with growth expected in mobile entertainment and mobile social networking. Other areas, such as hardware, have been predicted to fare less well. Say Communications' Stewart-Muir says margins in this sector have been squeezed so much that PR budgets have been pulled.

There is also more collaboration with advertising and direct marketing agencies on campaigns. There is a crossover in what agencies from different disciplines can do, which can lead to battles for the same budgets. Octopus' Lonsdale says: 'Where PR wins out is that it can control the two-way conversation.'

The way agencies work with clients has begun to change because of new technology that makes it easier to share information. Fraser says: 'Client-agency relationships are more fluid.' He explains Brands2Life has been sharing documents online with clients, which makes working across countries much easier.

Life for all sectors next year could be a challenge for the tech PR industry, but there is still work to be found for good agencies. 'More companies are seeing the benefit of PR,' says Hotwire's Syltevik.

To find out more about the companies feature in the Technology League Tables please got to; Technology PR Consultancies 2009