Looking at the consumer top 50, 2008 seems to have been a strong year for the leading agencies. In particular
Trimedia (which, partly thanks to acquisition,  knocked fellow Huntsworth agency The Red Consultancy off the top spot), Way To Blue and Colman Getty all posted very healthy fee income increases.

Double-digit growth was not uncommon among the top 50 consumer agencies. And yet, as our case studies overleaf demonstrate, by the final quarter of 2008 the recession had begun to bite. In fact, some agencies felt the impact right through the year.

But there have been some positive dev­elopments. Many agencies report that clients have reduced or even stopped advertising spend but kept their PR budgets unaltered. Agencies with ‘budget’ clients, such as Manchester-based Tangerine PR, which has an account with hardware store Wilkinsons, did well. And agencies ahead of the game in the digital field also flourished.

One notable trend in 2008 was the inc­rease in the number of integrated agencies. Kindred, formed from the merger bet­ween Geron­imo and Mustoes advertising agency, at number 35 in the top 50, now off­ers advertising, digital and PR all handled by a single account manager. MD Laura Oliphant says: ‘We look at the public or campaign aim first, and then the medium we choose. Clients are getting one agency.’

Mitchell Kaye, MD of Mischief PR, number 32 in the top 50, says his agency has begun to expand its offer, having recently won an account with Kempton Park Racecourse to provide PR services and advertising content.

But not everyone is convinced. Daniel Cohen, head of consumer at Trimedia, says he has noted the resurgence in ‘one-stop shops’ but adds: ‘It is not something to which we sign up. The need for absolute PR expertise is stronger than ever.’ 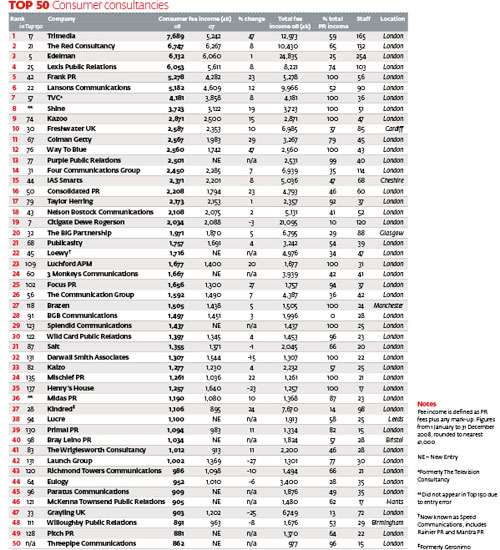 With outstanding growth of nearly 50 per cent, Trimedia knocked fellow Huntsworth agency The Red Consultancy off the top spot in PRWeek’s consumer league tables in 2008.

The agency acquired fellow Huntsworth consumer brands agency EHPR. ‘It became part of Trimedia at the end of last year, and that was a real highlight,’ says Daniel Cohen, head of consumer at the agency.

‘We ran some absolutely fantastic campaigns this year that drove awareness of us as experts,’ continues Cohen. ‘Critically we had strong organic growth from clients such as Diageo, Age Concern and Land Rover.’

But even a large agency within a marcoms group such as Huntsworth has noticed the economic downturn. ‘We started to get warning signs and by the fourth quarter the recession was already biting,’ says Cohen. ‘We have seen budgets being cut and there is a general expectation that it will continue until 2010.’

But he adds: ‘We are seeing some green shoots – even now, in May, it feels a lot better than it did in January.’

Trends he has noticed include clients looking to improve community relations. ‘There are a lot of brands looking to shrug off a global image for local support,’ he says. ‘We are also seeing a need to establish traditional values and create a sense of order. It is a fascinating time to be in PR.’

Looking ahead, Cohen expects the digital revolution to continue into 2009. ‘Everyone wants to get into it,’ he says. ‘We have just appointed a new head of digital.’

High point Campaigns for clients including Coca Cola and client wins including BBC Digital, the DVLA and Wrap Retail

Low point The impact of the recession on clients. ‘We are not immune to it’

By the middle of 2008, Shine’s tenth anniversary year, the agency had delivered 26 per cent growth in fees.

‘We won every piece of business we pitched for in the first quarter, which set us up for the year,’ says MD Rachel Bell. ‘It was only the last quarter that slowed our figures slightly and stopped us from having an absolutely brilliant year.’

Not that Shine did too badly in 2008 – it grew by nearly 20 per cent, client wins included Martini, Hotpoint, Peroni and Christian Aid and every single retained client renewed its contract at the end of the year. The agency was also shortlisted for awards for campaigns for eBay and EA Games.

‘We started up a digital business and hired Chris McCafferty from MySpace and Scott Williams from Google,’ says Bell. ‘Our digital division is absolutely flying and has been very well received by clients.’

In terms of trends, Bell says experiential is growing. ‘Experiential integrated with more traditional comms seems to be much more the model,’ she says.

It was not all work for Shine in 2008; the agency went to Morocco on holiday to celebrate its tenth birthday. ‘We also put out a book that was really well received, so we will be doing a follow-up to that,’ says Bell.

So far this year, Shine has not seen any drop in business and the agency is at 20 per cent growth. ‘It is hard to predict what will happen at the moment,’ warns Bell. ‘Budgets are taking longer to sign off, there are more people on pitch lists – the pipeline is much longer.’

‘The first is digital, and taking advantage of a new medium,’ he says. ‘The second is our growth across Europe. We are unique in terms of a consumer agency – no other has a European footprint like ours.’

As a result Way To Blue has grown at a rapid rate over a number of years and Swanton has no intention of dropping the pace. ‘We aim to be the number one consumer agency in the UK,’ he asserts.

‘We think of ourselves as a contender. The only problem I can think of is we didn’t have enough money to invest to grow even faster – the best we could do was 47 per cent. I wish we could have done more.’

For Way To Blue, with its major clients Paramount Studios, Universal Studios and Sony Pictures, the recession has barely registered.

‘The movie industry has been very kind to us,’ says Swanton.

The agency has continued to stay ahead of the digital trend. ‘People who spend money on advertising and communications are starting to realise the digital medium has better ROI than anywhere else.’

Campaigns in 2008, such as a campaign for The Kennel Club, featured original broadcast content, something Swanton identified as a growth area online: ‘We are starting to see the level of sophistication with which people are using the interne

High point Renewing deals with Paramount Studios and Sony Pictures for their film releases, and building on a relationship with Universal Studios on a project basis

A key event for Midas PR was 2008's Harlequin Mills & Boon centenary. The romance fiction publisher ran a year of celebration, kicking off with a huge rebranding launch party, and Midas secured month-on-month activity and coverage.

'We did everything from a travelling exhibition to Radio 4,' says joint MD Jacks Thomas.

The agency also worked on the inaugural Emirates Airlines International Festival of Literature, held in Dubai earlier this year. It was launched at the 2008 London Book Fair - another Midas client.

'We did notice comms going increasingly in-house last year, which made things tougher,' says Thomas. 'But where we have grown in the past five years is on the more corporate side - working on larger projects across the publishing industry.'

Inside the agency, 2008 saw Midas develop and nurture its own talent. 'We have a strong intern scheme and we recruit a lot from that,' says Thomas. 'Last year we also had a huge drive on professionalism - we benchmarked internally. It is tough out there and we cannot afford not to deliver.'

The agency has just rebranded and moved offices, giving it a fresh new feel and new workplace. The agency's digital department will also be a focus in 2009, and Midas is looking for a head of digital.

Thomas says she has noticed the pitch process taking longer. 'People are pressing the button at the last possible minute,' she says. 'We also noticed from January last year how much harder we had to fight to get projects to be outsourced. We are very pleased with our results last year, but we had to work very hard for them.'

High point - The Harlequin Mills & Boon centenary and a digital campaign for Chronicles of Narnia, to tie in with the film and the publication schedule

For Mischief MD Mitchell Kaye, 2008 was a year of highs.

'I had more than 1,000 direct enquiries for a job at Mischief, which is great, as I always wanted to run the type of agency at which people wanted to work,' he says.

As the agency has grown, so has its reputation. 'We had half a million hits on our website from all over the world,' says Kaye.

Developing the team was also a priority. 'We ran the second of our graduate schemes and I hired three people from it. I also promoted two people who had done the graduate scheme the previous year - it is very satisfying finding and investing in the best talent.'

The big change in 2008, according to Kaye, was 'PR agencies becoming the lead creative agency in the marketing mix'.

He explains: 'It is now about engaging people with the story you are telling, rather than just telling the story.'

Mischief is also diversifying its offer. In 2008 the agency won an account with Kempton Park Racecourse, which includes providing content for its advertising campaign.

One of the PR industry's most notorious moments in 2008 was Mischief walking away from the Virgin Radio rebrand account (PRWeek, 15 August 2008).

'It was our decision, but the disappointment was winning that business then realising we could not put our name to the work and the direction in which it was going,' says Kaye. 'We did not get to do the work we wanted to do.'

High point - Getting on the COI roster: 'When you call your company Mischief, to have a place on a government framework is brilliant'

Low point - Making a staff member redundant: 'I had to make some tough financial decisions to continue to protect our growth'

Manchester-based Tangerine PR is a newcomer to the consumer table this year, debuting at number 50.

Group MD Sandy Lindsay says the agency's increasing consumer income was a result of a number of 'budget' clients including Wilkinsons that have tended to flourish in the economic downturn.

'I would love to say that it was completely strategic and we foresaw the downturn in the marketplace, but it wasn't,' she says.

She adds: 'People at the highest and lowest ends of the market are doing well; it is those in the middle that are really suffering. We don't have that many middling clients - they tend to be high-end or low-end.'

Through 2008 Lindsay says the agency picked up more sports clients, both public and private sector. Tangerine did lose one client, a small retailer, but Lindsay says: 'So far we have not been that badly affected by the recession - although that is not to say we are complacent.'

Trends that Lindsay noticed during 2008 included a desire from clients to guarantee a return on their investment.

'At one time agencies used to say "we can't tell you how much coverage we can get", but we can't get away with that any more,' she says.

Clients now want guarantees to take the fear away, especially when selling back to their own board directors.

Looking ahead, Lindsay predicts a growth area will be 'anything to do with babies and children. People don't stop spending on that.'

High point - More clients stopping advertising spend and relying on PR alone. 'That means we can show how PR works'

Low point - Losing out on pitches because of price: 'We are never going to be the cheapest agency because our senior people are hands-on'

To find out more about the companies featured in the Consumer League Tables 2009 please click here; Consumer PR Consultancies 2009