Who is in the hotseat? Margot Raggett, Chief Executive

Highlights of 2008:
Refreshing the Lexis brand and our internal vision and values. Everyone (all 100 of us...) brainstormed and agreed the future path of Lexis and what we stood for. Our brilliant design team created our new logo and we launched a new website. We were thrilled to win Morrison's at the start of the year; the Diet Coke team pulled off a major coup by convincing Sex In The City style guru Patricia Field to design a limited edition bottle- securing Diet Coke's association with the movie of the year (despite the fact that they weren't actually a sponsor); and our youth team, SiX, won a CIPR award for their cheeky campaign persuading young men to become bone marrow donors for the Anthony Nolan Trust.

Significant hires 2008:
Will Oscroft joined to head up our Sport & Entertainment division leading the team who look after clients such as Barclays Premier League, Team RAC, Women's Sport & Fitness Foundation, FEI and EDF Energy 2012. Liz Bendall returned to Lexis to head up our experiential & youth marketing spin-off, Six. Liz was previously a Creative Director at Lexis and we were very happy to welcome her back.

Staffing overall 2008: Lexis recruited and developed some of the industry's leading talent in 2008. We bolstered our design team, Exo, with a talented young Designer and an exceptional Senior Designer. Our Creative team also got an injection of talent with two new members helping to embed creativity into every Lexis campaign.

With the ever-increasing competition across the industry, the engagement and retention of our much-valued colleagues has been a key priority for us. We continued to provide learning and development opportunities through our industry-leading 'Xpert' training programme. Furthermore, initiatives to ensure the well-being of staff such as introducing paid sabbaticals, reduced working hours for new parents and a more flexible working style available to all have helped to ensure staff feel supported in tougher times. We were also proud to raise over £12k for our company charity Cancer Research. 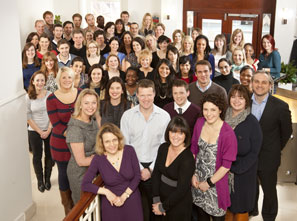 Plans and predictions for consumer PR in 2009:
Digital will continue to change the face of what we see as mainstream, ensuring that the pace at which stories flare up and go global mean we have to be fleeter of foot than ever before. Energy is needed in spadefuls! As the stormy economic ride continues, agencies need to recognise that showing proof of ROI matters more than ever if we're to persuade clients that their investment in PR is the right choice. Similarly, as budgets become harder to fight for, applying unique but smart creativity has to be central to everything we do to ensure we stand-out. Luckily we feel Lexis is in a strong place to take on the rest of the year with passion, energy and inspiration.

One thing you won't know about Lexis:
Margot, our CEO joined Lexis as our first graduate trainee. Not a bad career path if you ask us.