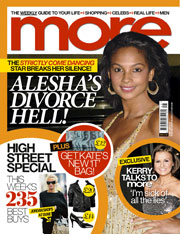 Laura Atkinson has moved to Heat magazine as deputy news editor, replacing Dan Fulvio. She joins from sister title More where she was ­celebrity and news ­editor

The editor of IPC women’s weekly Now Helen Johnston will leave after Christmas to work on a secret start-up project. She has yet to be ­replaced.

Michael Barker has started as fresh foods editor at The Grocer. He was editor of Commercial Grower, and replaces Sam Fortescue,who is taking a PR role at Dairy UK.

Tal Gottesman is now executive editorial manager at The Sunday Telegraph. She will also be acting as PA to editor Ian MacGregor.

Edd McCracken is now arts and education correspondent at Scotland’s Sunday Herald. McCracken was previously the editor of Fresh, the paper’s magazine for teens. David Christie, staff writer at The Big Issue in Scotland, has replaced him.

Laura Tennant has replaced Vincent Graff as editor of The London Magazine. Tennant was commissioning editor at thefirstpost.co.uk.

Benedict Moore-Bridger has joined the Evening Standard as a reporter. He was previously a reporter at INS News Agency.

Guy Anker has left the Daily Mail’s Money Mail, where he was a reporter, to join Five. He will work on a new personal finance series starting in January called It Pays to Watch. Anker will be assistant producer.

BBC Breakfast newsreader Kate Silverton is to present the station’s new 90-second nightly bulletins. She will ­also replace BBC One O’Clock News presenter ­Sophie Raworth when she goes on maternity leave in 2008.

Handbag.com deputy editor Kate Creasey has left to bec-ome launch editor for Cosmopolitan.co.uk, which relaunches in 2008.

Shiny Media writer Zara ­Rabinowicz has joined ­Shoewawa.com and theBaglady.tv as fashion writer. She will continue to write about celebrity news and gadgets for ShinyShiny.tv and StraTrip.tv.