Tulchan sits just ahead of FD, which advised on a massive 30 deals. FD advised UK medical instruments firm Gyrus Group as it was acq­uired by Japanese firm Olympus for just over £1bn.

Finsbury managed third spot after advising on £5.2bn worth of deals through Nov­ember. The agency actually only advised on four deals, but large acquisitions, such as Italian firm Eni’s purchase of independent oil and gas producer Burren Energy for £1.7bn, helped boost Finsbury’s standing. 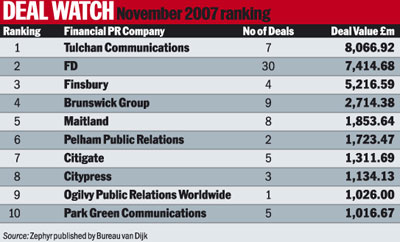 After the third placement, values fall away sharply, indicating another difficult month. Last month Deal Watch showed a sharp drop in deal values (PRWeek, 9 November). The top ten agencies in November this year advised on more than £15bn worth of deals – less than the same period in 2006.

November usually heralds the start of the end-of-year slowdown and Brunswick, in fourth, saw a £3bn drop-off through November, compared with last month.

From Maitland, in fifth, to Park Green Communications in tenth spot, all the agencies advised between £1bn and £1.8bn worth of deals. Remarkably, only FD broke into double figures in terms of number of deals advised.