It was the government scandal to beat all government scandals. When the 23-year-old junior at the Child Benefit Agency posted two computer disks containing the personal details of 25 million UK citizens by unrecorded post, a PR storm was unleashed that enveloped not only the Government but num­erous companies and public bodies.

As British Bankers’ Association (BBA) director of comms Lesley McLeod put it: ‘At 3.30pm last Tuesday, the Chancellor made his announcement, and the world went mad.’ In fact, the BBA had received a few calls before that, after news of HM Revenue & Customs (HMRC) chairman Paul Gray’s resignation was leaked, but parliamentary privilege had restricted what its press officers could report.

Spiralling story
Since then, all of the main banks’ ­media teams have been fielding calls about the effects of the missing disks on their operations. Nationwide Building Society media relations manager Steve Cowdry has been sticking to a key message: customers are not panicking.

The Public and Commercial Services Union (PCS) was able to use the story to push its own message – that the loss of the data disks is symptomatic of the pressure its staff are under.

But the second task for PCS press ­officer Alex Flynn was more tricky – protecting the identity of the individual who actually posted the disks.

‘He – or she – doesn’t want to speak to the media. There were a lot of people trying all sorts of tactics to get the name of the individual – for example, phoning up pretending to be members of the Metropolitan Police. We took the decision to restrict the identity of the individual to a few people,’ he says.

Although there was no proof that ­delivery service provider TNT had mailed the parcel in question, it rec-eived more than 60 calls from journalists ­(including calls from 17 BBC correspondents) after the company was named in the Chancellor’s announcement. TNT was confined to putting out a statement – approved by HMRC – and talking around it. 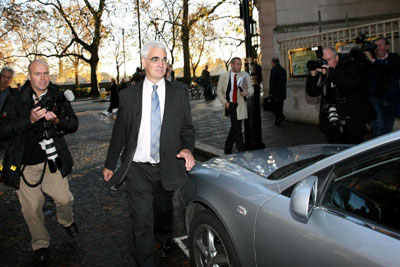 TNT PR executive Nick Murray says: ‘The main thing we are saying is that there is no proof the disks ever entered our mail system.’

But it is the Government that has the biggest PR battle on its hands. According to the BBA’s McLeod: ‘The ramifications for trust and credibility are going to be important; it has come on the back of Northern Rock.’

Editorial Intelligence chief executive Julia Hobsbawm says her company’s analysis of media coverage of the story shows that the tone of 95 per cent of columnists’ reactions to the saga was negative – concerned mainly with a decline in government competence.

Hobsbawm says: ‘Commentators have turned on the Government. Even Daily Mirror political columnist Kevin Maguire, who is one of the most supportive of Labour, was very negative.’

Mike Granatt, Luther Pendragon partner and former director-general of the Government Information Service, says the Treasury and HMRC’s press teams failed to package the story to the media and Parliament.

‘The information has to be right if you’re announcing it in Parliament, but this story has a huge number of loose ends. The Government said that the banks were not ready to deal with the issue, but then the banks all denied that.’

Granatt feels that, by contrast, the banks fared well, appearing well-prepared. He also believes that the Government failed to present the story clearly to the public: ‘The Government failed to answer the biggest question the public wanted answering: What does this mean to me? Talking about computer systems and who said what to who is of no interest to most ordinary people.’

Zero popularity
Other observers are more sympathetic to the Treasury’s position. George Pitcher, managing director at Bridgit Consulting, feels that ­Darling ‘didn’t do a bad job of damage limitation. He said there had been a mistake.’

For HMRC to avoid a serious loss of public confidence, he thinks ­media teams must continue to stress the difference between individual and institutional error. But, as he points out, the HMRC is ‘not viewed as an attractive entity anyway, so it starts from a zero base of popularity’.

Observers agree the stakes remain extremely high for a government that prides itself on good financial management.