Frank O’Donnell has been promoted from deputy news editor to news editor at The Scotsman. O’Donnell replaces James Hall who has joined The Sunday Telegraph.

Kate Hughes is now personal finance reporter at The Independent. She joins from FT Business’ Financial Adviser where she was deputy features editor.

Rosamund Urwin has joined the Evening Standard as a business reporter. She will edit the paper’s twice-daily email bulletin and produce the daily podcast.

Iain Dey, financial correspondent for The Sunday Telegraph, is moving to The Sunday Times’ business desk.

Kathleen Morgan has returned from maternity leave and has resumed her role as editor of Scottish newspaper The Herald’s The Herald Magazine.

Debbie James has been appointed news editor at Wales’ Daily Post. She moves from the Liverpool Daily Post, where she was deputy news editor.

PrintWeek has hired William Mitting as deputy news editor. He moves to the Haymarket title from JRS Corporate’s Corporate UK, where he was editor.

Emap’s AJ (Architects’ Journal) has relaunched with new sections. Christine Murray has joined as senior editor of the new Critics section. James Pallister has been promoted from editorial assistant to features writer. Kaye Alexander is now editorial assistant at the trade title.

The British Society of Magazine Editors (BSME) has named Harper’s  Bazaar’s Lucy Yeomans as editor’s editor of the year. 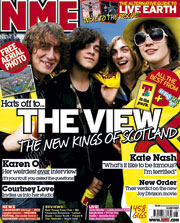 IPC and CSC Media Group have created NMETV, a TV channel for fans of alternative music. It will debut at the end of November on Sky channel 377.

Telegraph Media Group has created a multimedia business department producing dedicated content for Telegraph.co.uk, plus The Daily Telegraph and The Sunday Telegraph.

Adfero’s personal finance website myfinances.co.uk has named Daniel Barnes as its new editor. Barnes moves from Adfero’s DirectNews, where he was a senior correspondent covering insurance and science.