But such is the surprising background of Paul Fox. From hanging around the dank toilet venues of Camden handling press at Polygram for Pulp, he somehow progressed to creating ground-breaking campaigns for Tomb Raider, Xbox and the Halo games series.

‘Those were quite fun days,’ he says with a wistful look in his eye. ‘I remember seeing Blur and Oasis. The Lemonheads were really big, and Teenage Fanclub. It was an exciting time.’

Excitement has followed Fox around. At 35, he has been head of comms at the Entertainment and Devices Division of Microsoft EMEA for eight years. ‘I was the third person to join the division,’ he says proudly.

But this role has lately been given a new twist. During the summer he was handed the additional task of looking after Xbox’s ‘citizenship’ – corporate responsibility, essentially. He seems genuinely passionate about this new role and talks at great length about what Microsoft is doing with rating bands, family settings and timer controls.

Fox says his friends would describe him as an ‘enthusiast’, and this is evidenced by his eagerness to follow Liverpool FC around Europe. His musical tastes are starting to lean towards the contemporary – as well as his beloved nineties rock, he raves about recent albums by Bloc Party and Gwen Stefani.

Such enthusiasm has helped to make the latest incarnation, Xbox 360, the biggest-selling games machine on the market, outrunning Nintendo Wii and Sony PlayStation with 13.4 million in sales by the third quarter of this year. In the run up to Christmas, Microsoft will focus on continuing the promotion of its hugely popular Halo 3, as well as pushing Mass Effect, a futuristic act­ion role-playing game released this week.

Fox’s leap into the gaming industry, with a PR role at adventure gaming experts Sierra, was based on his own need for a new challenge and the gaming industry’s need to stop being so niche: ‘There was a lot of ambition to break out. They were keen to recruit people in the music and film industries – all the main release industries.’

And Fox certainly helped the gaming industry to break out. At Eidos he played a major part in making Lara Croft one of the icons of the 1990s by, among other things, getting the character on to the ­cover of The Face wearing Alexander ­McQueen swimwear. With a characteristic lack
of ego, Fox admits he had ‘some good ­fortune’.

‘But yes, it was my idea to take it in that direction. We had this iconic female character who was very good looking and who had superhuman attributes. It seemed like an obvious step to find a human incarnation of her.’ Soon, Lara was accompanying U2 on tour and appearing on special bottles of ‘Lara-zade’.

Eidos new media comms manager Emily Britt has known Fox since their days of working together at Sierra, and says Fox manages to find the right balance between following messaging and maintaining his own honesty, adding: ‘He’s very hard working and he’s well respected by everyone I know, including journalists.’

Fox’s most recent success was the launch of Halo 3 in September, during which the game was given the red carpet treatment in a series of premiere-style events arranged by Edelman at swanky venues such as the IMAX. Pharrell Williams, Carmen Electra and LL Cool J were all snapped by the paps and it scored piles of tabloid coverage.

And yet despite all the work he has done to push the industry forward, Fox does not believe the gaming industry has yet achieved its potential: ‘We’re still pushing for mainstream acceptance, to totally break through. I still don’t feel we’re on the same scale as other industries. It’s a challenge for us and our competitors.’

So how did Fox respond to coming to work in the heart of the biggest and often most reviled technology company in the world? He says that launching Xbox in 2001 was the biggest challenge of his career, in that everyone was waiting for his team to prove themselves. Many in the gaming community in particular were initially horrified at the thought of Microsoft entering the gaming market.

‘Microsoft is such an incredibly well known brand,’ says Fox. ‘Everybody has a perspective on it. But we were very deliberate to tell our own story, to find our own way. It’s been a rollercoaster. It had the excitement of a start up, with lots of bright young people, but there was a lot of stability too.’

He admits there was a steep ‘learning curve’, and he finds that much of the job is about leveraging the enormous network of people within Microsoft. He spent most of his first year flying over to Seattle and taking conference calls.

The key, he says, is being organised and structured: ‘It’s pretty task-oriented – that’s the only way you can manage your time. There’s a lot of pressure on your time from the people you work for.’ That translates into a 7.30am start on most days, partly to beat the traffic from his Barnet home. He says that the thing that has improved most significantly throughout his career is the tidiness of his desk.

So after eight years, is he ready to move on? ‘No. It’s still incredible fun. Every day is different. The challenge now is staying number one.’ 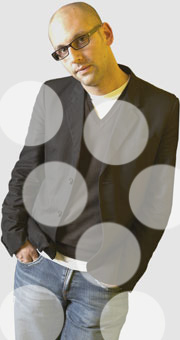 What was your biggest career break? One was getting work experience at the music PR agency Press Council when I was at university. I was very privileged to get that break. It helped me to build up a good contact base. The second break was working on Lara Croft. That really just built momentum in an incredible way. The third was getting a job at Microsoft.

What advice would you give to someone climbing the career ladder? Be yourself. Be authentic and trust in your abilities. Be determined. You’re meant to be creating the message for your client but you’ve got to be creative to do that properly.

Who was your most notable mentor? A lady called Leah Kalboussi. She was a general manager at Sierra who got me the break there. She gave me a lot of support when I knew no one. She was really supportive and inspirational. Then probably I would say J Allard. He was the global leader of the Xbox project. He was the most energetic person I’ve ever met.

What do you prize most in new recruits?
Enthusiasm – that’s it in a nutshell. I really like people who seem to be up for it. I’d like to think that’s what people see in me.