When Northern Rock’s credit crisis hit the headlines in September, the cherubic face and avuncular tones of Justin Urquhart Stewart were a regular and reassuring presence for TV and ­radio audiences.

Given Urquhart Stewart’s frequent appearances on BBC Radio Five Live’s Wake Up to Money, Radio 4’s Today programme, Sky News, CNN, BBC Breakfast and BBC2’s Working Lunch, it would be tempting to assume that he is employed by the financial services industry to reassure a jittery public. As it turns out, he is simply the marketing ­director of one small firm in the sector, ­although he does boast an impeccable financial comms pedigree (see CV).

The PR operation that has made him and his company, Seven Investment Management (7IM), so well known is lean. Very lean. It consists of him and him alone. His media relations strategy is also fiendishly simple: he talks to journalists.

Urquhart Stewart has made himself into the broadcasters’ ‘go-to’ guy by being engaging and by standing out among sombre-suited City folk not renowned for their humour. 7IM manages investments in property and commodities, as well as stocks and shares – not much to chuckle about there. But its marketing director’s affable manner and sound analysis ensure that the 65-strong firm, with its relatively small figure of around £2bn of assets under management, is often mentioned in the same breath as corporate behemoths such as Credit Suisse or Barclays – for which he used to work before co-founding 7IM.

‘If you wanted, you could fill your day ­going on programmes,’ Urquhart Stewart says. ­Although he rations his appearances, he still aims to be available to journalists from 5am to 7pm daily.

Married, with a daughter at university, the 52-year-old lives in Hammersmith – handy for those early morning jaunts to ­BBC Television Centre and Sky’s West London headquarters.

The demands of 24-hour news mean that Urquhart Stewart has ISDN lines in his office and at home. The latter is not without its ­perils – the family cat purred into the microphone during one broadcast. ‘It sounded like wind, I had to apologise to LBC,’ he recalls.

It is 8am when Urquhart Stewart sits down at an 18-seat antique dining table for our ­interview at 7IM’s Oxford Circus headquarters, but he has already commented on October’s postal strikes for the Today programme and the Independent Radio News.

His openness with the media is at odds with the frosty corporate climate he faced when he started out with Barclays Stockbrokers in the 1980s. ‘Twenty-five years ago you didn’t have to explain yourself at all,’ he recalls. ‘Companies’ strategies often used to be about preventing you from communicating with the audience – news prevention, effectively. Then when they wanted coverage for something, they wondered why they didn’t get any. I’ve generally got more respect from journalists by picking up the phone when there is bad news. Northern Rock was a classic example of where clear messages had to go out.’

As befits a man who spends his time dispensing clever soundbites, his conversation is peppered with polished bon mots such as: ‘ISAs were all about commodities, but this year’s fashion fad is next year’s tank top.’ But beneath the fun, courteous exterior is a serious media player well aware of his currency as a commentator. Take his on-screen ‘uniform’ of bright red braces. Once the epitome of thrusting ’80s City ambition, they convey a more complex message today.

Henk Potts, equity strategist at Barclays Stockbrokers and fellow TV pundit, believes the red braces identify ­Urquhart Stewart as a City gent and let the public know they have a straight-talking champion in their corner.

‘In a world where brand can be the difference between success and failure, Justin is one of the biggest assets a wealth manager can have,’ he says.

However he is dressed, a financial commentator who can translate the complex language of business into easily understood messages about house prices, pensions and savings for the general public is a valuable commodity. It helps that Urquhart Stewart is also a master of the memorable quote. Talking to the BBC about the recent US sub-prime mortgage crisis, he suggested the hapless anchor ‘looked at all these bad loans as a bit like a blancmange that has been hit by a spade and has gone ­everywhere’.

Michael Wilson, business and economics editor at Sky News, has used Urquhart Stewart for more than a decade. He says: ‘The reason he is good is that he can talk in English about what’s happening in the City. He can effortlessly put a complicated financial situation into easy-to-understand terms.’

As well as the obvious finance and news outlets, Urquhart Stewart has spread his net to include more consumer-oriented programmes. ‘I have done a couple of Watchdogs. They can be a bit extreme,’ he says, smiling.

Nor does he confine himself to the broadcast media. Urquhart Stewart writes for The Independent, Scotland on Sunday (7IM has an office in Edinburgh) and has a column on the Stock Exchange website. He has also carved a niche as a rousing after-dinner speaker.

You would think PROs would be itching to get their hands on the 7IM brand, but Urquhart Stewart says he has never used a PR agency. Which is not to say that he doesn’t ­recognise his limitations when it comes to crisis or issues management. ‘I would use an agency if we invested in something that went horribly wrong or were involved in a big fraud,’ he says.

However, he sees his one-man, opinion-giver PR blueprint as more than adequate for brand-building. And remarkably for such a small company, Urquhart Stewart even faces the peril of over-exposure. ‘There is one viewer who absolutely hates me and writes to the BBC saying: “He’s on far too much!” Luckily, he doesn’t watch GMTV or CNN.’

The viewer in question will have to contain his ire for a little while longer, although Urquhart Stewart does have another career change on the horizon. He intends to quit in seven years’ time and study archaeology. Why the precise timescale? ‘I think being an archaelogist is probably something you have to be able to afford!’ he explains.

The study of ancient worlds is presumably more peaceful than his current role in the maelstrom of the City, and certainly more so than his stint at Barclays Bank International in the late 1970s, during which time he was gunned down in Uganda.

Before he hangs up his ISDN line for good, perhaps he could offer PRWeek his thoughts on the secrets of successful media punditry? ‘You are there to fill a space,’ he insists. ‘So don’t lie, make it interesting and don’t be afraid. Most of the time you’re not going to be up against John Humphrys. And if they mention your company name, that’s great. But expect nothing more.’

Put like that, it sounds simple. But don’t be tempted to try it without Urquhart Stewart’s vast knowledge, quick wit and winning charm. 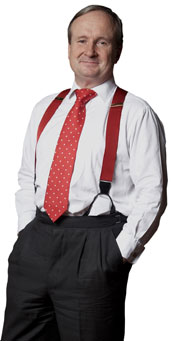