Observer editor Roger Alton will step down at the end of the year, to be replaced by deputy editor John Mulholland.

Historian and Harvard professor Niall Ferguson has been appointed contributing editor at the Financial Times. Ferguson will blog on international finance at FT.com and write essays and reviews for FT Weekend. Sylvia Pfeifer will join the FT as defence industries correspondent. 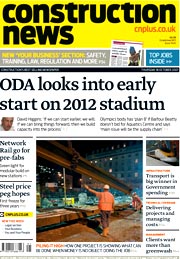 Tim Sharp has joined The Herald as city reporter following the departure of Paul Rogerson, who has moved to the Law Society Gazette as editor in chief. Sharp joins from Citywire where he was assistant news editor.

Construction News has appointed Andrea Klettner as a reporter. Klettner moves from fellow Emap title AM, where she was staff writer.

Good Housekeeping has appointed freelancer Elisabeth Knowles as acting features editor to cover for Lucy Moore, who is on maternity leave.

The Guardian has launched its US website, Guardianamerica.com. Editor Michael Tomasky will head up its editorial team.

BBC Radio 4’s The World This Weekend and World at One editor Colin Hancock has left. Radio 4 PM editor Peter Rippon has taken over.

Mark Freeland has been named head of comedy at the BBC. Freeland will also be responsible for overseeing new original content division BBC Visions in addition to all comedy content on BBC radio.

Former Press Gazette editor Philippa Kennedy will present a series on BBC Radio 4 entitled Read All About It, focusing on regional newspapers’ use of technology.