Thousands of young hopefuls embark upon PR degrees every year, but is there really any point? If PR is all about networking, negotiating with journalists and writing press releases, would students not be better off learning on the job than in the lecture hall?

While PR degrees have been on offer for more than two decades, this view is still held by some of the industry’s senior members. Young PROs should focus on working their way up the career ladder without a degree, they argue.

Trevor Morris – the University of Westminster’s visiting professor of PR and former CEO of Chime’s PR division – believes these naysayers ‘miss the point’ of what a PR degree is really for.

‘The skills elements can be picked up on the job, but what a PR degree does is help students to learn how to think – not what to think – and helps put business in context,’ he argues.

To judge this for ourselves, PRWeek sent two industry veterans – Bell Pottinger chairman Kevin Murray and IPC Media corporate communications director Karen Myers – back to university for a day. Neither Bell nor Myers hold a degree in PR.

Both sat in on a lecture entitled ‘The relationship between PR and Propaganda’, part of Westminster’s BA Media Studies course.

The session, delivered by senior lecturer Simon Goldsworthy, covered the origins of the term ‘propaganda’, including its associations with the 17th century Roman Catholic Church, and with Nazism and Communism.

Goldsworthy compared propaganda to modern PR, arguing that, while there are similarities between the two: ‘Propaganda is what conducts the orchestra and could include education, art, even street names and festivals. But no PR person is quite that powerful – PR is just an important section in the orchestra.’

Moreover, he posited, PR is a ‘symptom of freedom – there is no real call for it if the media are not free’. This, he pointed out, is why there is currently such enormous growth for PR agencies operating in former Communist countries.

After the lecture, Myers and Murray were the guests in a debate on the lecture, giving the students a chance to quiz our ‘PRO grandees’ about the value they placed on a PR degree. 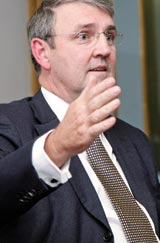 Career path: Murray did not go to university, only going into PR after working as a journalist in South Africa. He was later to lead communications for the Atomic Energy Authority and for British Airways before joining Bell Pottinger.

On the Propaganda lecture… Murray says he found the lecture ‘interesting, but academic’, adding: ‘I don’t think I’ve ever got into that sort of discussion with a client.

‘I don’t care about the definitions of words – whether it is “propaganda” or the more commonly heard word, “spin”. There is nothing inherently bad about them – it is all about context,’ he says.

Murray also argues that PR differs greatly from propaganda because one of the most important parts of the job is ‘systematic listening’ to CEOs and other business leaders.

Moreover, quite apart from any negative connotations the words ‘propaganda’ and ‘spin’ may have, Murray insists that communications campaigns only work when they are ‘win-win’.

‘Unless there is something in it for you, you won’t be persuaded to change your behaviour,’ he argues, particularly in today’s ‘fishbowl’ world, where transparency is key.

On PR degrees… Bell Pottinger hires six to eight graduates each year, but receives more than 400 applications for those places.

During the debate Murray asked students to pinpoint what they thought he looked for in new recruits. None of their answers – including language skills, empathy, personal integrity, media knowledge and ability to write press releases – won as much respect as that of one student, who outlined ‘willingness to learn’ as a vital characteristic of a new PR recruit.

‘You can train people, but getting the right person in the first place is what it’s all about,’ explains Murray. ‘I’m looking for a willingness to keep learning. I don’t care much about degrees so don’t come in thinking you know everything. I value enthusiasm over experience every time.’

That said, Murray concedes PR degrees are ‘jolly useful and very focused’, adding: ‘Those who study PR will understand quite a bit about the science of this art. But I don’t think I’ve met a single graduate who hasn’t come to Bell Pottinger and had to learn a great deal about the reality of delivering for clients, and putting that theory into practice.

‘Those who will go the furthest are the people who regard learning as the best way to solve a problem.’ 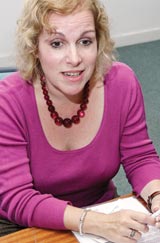 Career path: Myers studied English and American Arts at the University of Exeter, before becoming a junior PR assistant and traffic broadcaster on LBC Radio for the Automobile Association (AA). She worked for the AA for 21 years, working her way up to the position of comms director.  She moved to IPC as director of comms in 2005.

On the Propaganda lecture… Myers says that she found the lecture ‘fascinating’. Although she admits the average PR person doesn’t think about these issues ‘on a day-to-day basis’, she enjoyed the way it made students think about the issues and the strong opinions it provoked.

‘What we do largely fits within the definitions of propaganda, but propaganda is not a negative term if you look at it objectively,’ she argues.

On PR degrees… Myers can see why a PR degree is useful. ‘It gives you the technical skills to write, debate and understand the media, and helps set your ambitions in context,’ she explains.

‘Learning how to make choices when presented with information is a very useful skill.’

But while the people Myers has employed with PR degrees have always been very good, it is not a deciding factor when hiring. ‘If I had whittled applicants down to two, the fact one of them had a PR degree wouldn’t necessarily swing it.’

Like Murray, Myers deems an individual’s character and capabilities more important than qualifications. But she stresses the decision on whether to take a PR degree is entirely dependent on the student: ‘It is not necessarily better than another degree but it does prepare you for the types of experiences you might have, and gives you an understanding of the issues,’ she explains.

‘If you want clarity of direction at 18 or 19 years old, it is a good choice, but it’s often down to the individual personality.’

One tip Myers was keen to give the students before they start applying for jobs was to take care over their cover letter. Both Myers and Murray agree this can often be more important than the accompanying CV.

Myers admits she was surprised only one student asked for a business card during the session. ‘But overall, attending the lecture gave me a sense that there are certainly a lot of good people out there preparing to be the next generation of PR people,’ she adds.