Luton airport is orange. Seriously orange. So why is the perennially chic Jerry Hall ­suddenly choosing to fly from the Tangoed terminal, and eulogising the experience in the Evening Standard?

‘Forget British Airways,’ gushes the former Mrs Jagger, ‘fly Silverjet to New York from Luton airport. It is a carbon-neutral ­airline and there’s a carbon-offset contribution included in the ticket price.’

You can bet this purring endorsement has something to do with Silverjet CEO Lawrence Hunt, the PR-savvy founder of Britain’s first business class-only service from London to New York.

The company’s private departure lounge, where this interview takes place, is an oasis of soothing colours, fresh fruit and squishy bucket chairs. Its calm sophistication is in stark contrast to the hurly burly of the bilious orange hangar outside.

‘Calm’ is not a word that could be used to describe Hunt, however. He strides purposefully around the lounge, gulps down a glass of water and – while polite and occasionally jokey – has his eyes glued to his Blackberry until the very second the interview begins. ‘I don’t get much downtime,’ he says, stoically.

According to the airline’s latest figures, Silverjet must be doing something right. It reported a load factor (how full its planes are) of 80 per cent during August, and Hunt claims costs are covered if 65 seats are filled.

Competitors are predictably sceptical. No-one faults the Silverjet product, but many doubt that a new player can survive in such a tough market.

Silverjet’s competitors include the traditional transatlantic carriers, and ­business-only ventures such as Eos and Maxjet (‘one of them is bound to disappear in the next year,’ predicts one competitor).

Hunt is a firm believer in using PR to help differentiate the airline from its competitors. The airline uses agency Talk PR for consumer PR, and it has recently recruited a full-time, in-house team of three.

‘PR has great returns, as does online marketing, whereas traditional advertising is,’ he pauses, ‘questionable.’

Hunt’s PR instincts mean that he is keen to elicit the maximum value out of his celebrity passengers (as well as Hall, Silverjet has carried Elton John and Kaiser Chiefs).

Although he insists the celebrities pay – albeit at a staff rate – he adds that it is ‘hugely satisfying when they compliment Silverjet’.

Hunt is very hands-on, talking to his PR teams several times a day. Perhaps this is ­because – according to freelance travel journalist Jeremy Skidmore – he respects and understands the media.

Knee-jerk reaction
‘He knows that we like a drink and we want a story. He’s sharp but he is a good laugh, too,’ he says.

But the airline has not had an entirely easy ride. Last month, Silverjet’s share price dipped after it announced it would withdraw from the charter flight market. Since then, the company and its financial PR agency The Hogarth Partnership have been ‘going through quite an ­extensive process of educating the media and investors on what that decision meant’, says Hunt.

‘The general view of media and most analysts is that it is a complete overreaction by uneducated investors,’ he adds, with characteristic confidence. 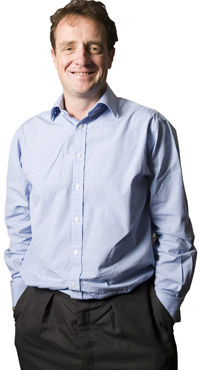 He is a self-proclaimed fan of Ryanair CEO Michael O’Leary, but brands the outspoken Irishman – who reportedly suggested massacring cows as a solution for global warming – an ‘idiot’ where green issues are concerned. O’Leary’s attitude couldn’t be more different to that of Hunt, who has put Silverjet’s carbon-neutral status firmly at the heart of its PR strategy.

The Government, he adds angrily, is making the ­situation worse. ‘It’s complete chaos, mostly because the Government is completely idiotic. It has got four departments dealing with us, no joined-up policies; it’s all knee-jerk reactions – slap another billion pounds of tax on. It is not helpful.’

Indeed, Hunt feels ignored by the Government, and says that Silverjet’s public affairs agency Open Road ‘gets as frustrated as I do’ with the lack of response.

‘There is no support for business in this country, it’s all bollocks, total lip service. ‘We have raised millions of pounds of ­investment in this country and we’re creating jobs, right? But we have written to the ­Government I don’t know how many times, and I haven’t even had a meeting with a minister.

‘The Government should be providing support, grants, reducing red tape, giving us its business. It should be listening to our environmental strategy because we are the only airline that has done something concrete about it.’

Up against bureaucracy
He is even more incensed as he recalls minister for climate change Ian Pearson’s invitation to attend a photo shoot for the launch of a new environmental policy.

Like so many entrepreneurs, Hunt detests red tape. He describes with horror having worked for businesses that were ‘stifled by bureaucracy and administration’.

And, like most entrepreneurs, Hunt has at least one failed venture behind him – online travel company Dreamticket – although it is not mentioned in his CV.

If Silverjet’s competitors are correct, and one of the three business-only airlines does go bust, Hunt’s advocates – such as Pippa ­Isbell, Orient-Express Hotels’ vice-president corporate communications – are convinced that it will not be Silverjet.

‘You can be sure that there is nothing he will have forgotten to do,’ she says.

As Hunt strides off purposefully – after the briefest of goodbyes – you can see exactly what Isbell means. He is the epitome of ­single-minded determination and there is no time for small talk with an airline to run.

HUNT ON HIS RIVALS...

1. Virgin Atlantic chairman Richard Branson: ‘White rabbit’ (because ‘he always pulls the white rabbit out of the hat’)

2007
Silverjet’s inaugural flight. The airline raises a further £24.6m on AIM in April .

2000
Launches Dreamticket, a spin-off from Rapid Travel Solutions (RTS), which collapses during the dotcom bust. RTS is sold to Telewest Communicationsin 2003.

1992
Becomes sales and marketing director at Database Management Sciences, which is sold to IBM in 1993.

1980s
Turns down a job in the family business – the famous London bookshop Foyles – to join IBM, then works in sales and marketing for a range of tech companies, including BMS and Novell.