Tim Webb, currently deputy business editor of the Independent on Sunday, is to join The Observer as industrial editor. He replaces Oliver Morgan.

James Mellor has been appointed news editor at News of the World. Mellor, who is currently deputy news editor at The Sunday Telegraph, will replace Neil Hudd.

The Reading Chronicle, which is published by the Berkshire Media Group, has appointed former assistant editor Joyce McKimm to deputy group editor. McKimm is also acting editor in chief since Simon Jones’ departure to become head of comms at Hammersmith and Fulham Council.

Anna Bromilow, senior fashion editor at Tatler, will now be covering the role of fashion director while Charlie Anderson is on maternity leave.

NME has appointed James McMahon as features editor and Alex Miller as new music editor. Hamish MacBain has been appointed live music editor, having moved from Time Out, where he was deputy music editor.

Laura Mannering has joined Good Housekeeping as deputy features editor. She joins from Reveal magazine where she was senior features writer.

Radio Hampshire, formerly The Saint, launched this week. The station broadcasts throughout Southampton and South Hampshire, and features news, travel and local events. Will Cope is head of news and sport.

Sports presenter Damian Johnson joins the BBC Yorkshire and Lincolnshire news team. Previously a presenter and reporter on Grandstand, Football Focus, Match of the Day and Final Score, he will be the Monday sports presenter on BBC Look North. 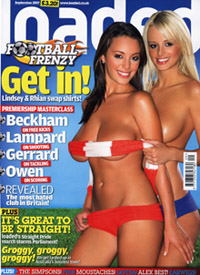 IPC title Golf Monthly has launched a new online video series, Gear Vault, on www.golf-monthly.co.uk. The videos aim to provide golfing enthusiasts with reviews of the latest equipment before it features in the magazine.

Absolute London and Absolute Brighton, two lifestyle and society magazines, have recently launched their new website at www.absolutebrighton.tv. Verity Smart is the editor.