Elizabeth Day, currently a features writer at the Mail on Sunday, is moving to The Observer in September in the same position. She will be writing across the paper, for the magazine and monthly supplements but will be based at the Review.

Matt Wells, who has been editor of the Media Guardian supplement for the past three years, is now head of audio for the Guardian Unlimited site.

The Press Association has hired Matt Joy as editor, PA motoring. Joy has been with PA for more than two years as a motoring writer, having joined from Auto Express.

Emap women’s weekly First has appointed Jane Ennis as editor. Ennis, former editor of IPC’s Now magazine, replaces Jane Johnson, who is to join the News of the World as deputy editor. 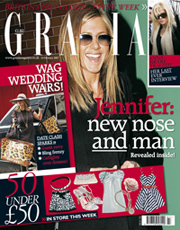 Intelligent Life, the lifestyle cousin of The Economist, is to relaunch as a quarterly in September under editor Edward Carr. It will include sections on travel, food, philanthropy, health, fashion and shopping, and design and the arts.

Debbi Marco is now acting features editor at Good Housekeeping. Marco, previously a features writer at Bella, will be covering for Lucy Moore who is on maternity leave.

The Sunderland Echo has relaunched its website with more interactive facilities. It can be reached at www.sunderlandecho.com.

IPC has launched ShootingUK, an online portal for the British shooting community.