Coverage of the opening of the new Wembley Stadium for Saturday’s FA Cup Final was a bit like the match itself, where a glorious setting heralded some seriously mediocre play on the pitch.

Headlines were glowing: ‘Finally Wembley’s back with a roar’ (The Sunday Times, 20 May), ‘New Wembley worth the wait ’ (bbc.co.uk, 20 May), ‘New Wembley is a triumph’ (Independent on Sunday, 20 May). But comment focused on the negative: the high cost of food, which prompted a Football Supporters’ Federation call to boycott catering outlets, and the price of programmes and tickets.

‘The cost of food, drink and programmes inside Wembley were… fixed on the assumption that everyone attending the FA Cup final has the disposable income of those playing in it’ (The Daily Telegraph, 19 May). Inevitably, the doubling of the construction budget, and the four-year delay were raked over as well.

Eulogies appeared more frequently than goals, as commentators agreed the arches had become a London icon, and Prince William dubbed the stadium ‘magnificent’. ‘Let’s forget all about the unpleasantness and rejoice in the fact that the damned thing is finally ready for action,’ urged The Independent (19 May) – a sentiment apparently shared by most. 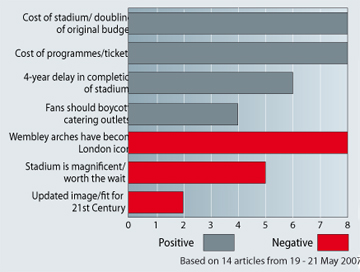 Analysis conducted by Echo Research from data supplied to PRWeek from NewsNow.