PRWeek’s third Health Watch, the bimonthly report on health coverage by UK print publications, shows that the topic was mentioned around 500 more times than in the previous two-month period.

But cancer was still the most written-about disease area – even though mentions remained at roughly the same level as in the previous two months.

Among the most high profile stories in the past two months’ health coverage were a survey showing that mental health issues cost the British economy £10bn a year, increases in skunk cannabis addiction and the news that drug use had contributed to an almost three-fold rise in patients with mental problems over the last decade.

Cancer stories ranged from a new jab for pancreatic cancer sufferers to retreads of perennial concerns over the ‘postcode lottery’ aspect of NHS treatment. News of Mycancerdrugs, a private health insurance package which makes treatment available to sufferers, received widespread column inches. So too did last month’s overturning by the National Institute of Health and Clinical Excellence (NICE) of Temodal and Gliadel, used to treat brain tumours.

Cardiovascular health came behind cancer and mental health this time round. Coverage included the threat of a global epidemic of heart disease due to increased stress.

Meanwhile, immunology slipped back to fourth place. It had previously been at the top of the table following the bird flu outbreak at a Bernard Matthews turkey farm, which preoccupied the media in January and February.

Health Watch is compiled by Presswatch Media from articles across national newspapers and 300 magazines, including periodicals. 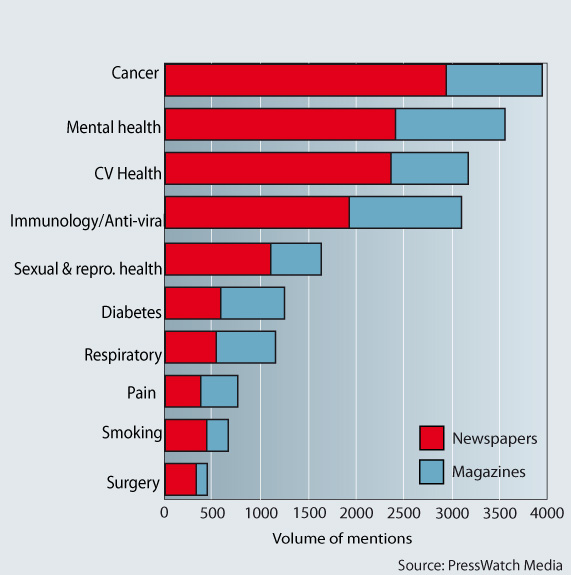