There's no doubt 2006 was a boom year. A backdrop of improving market confidence was reflected by many agencies registering strong fee income growth.

A total of 127 businesses in our table were able to disclose financial information to us: the other 23 were restricted by the Sarbanes-Oxley Act.

Of the former group, average fee income growth was almost 21 per cent. More than half of these grew by more than 15 per cent, with 35 achieving growth of 30 per cent or more and 11 surpassing 50 per cent. Only the seven lowest ranked agencies in the Top 150 now post fee income below the £1m mark.

These are undoubtedly good times, but not every agency has been reaping the benefits. A greater number of agencies than last time - roughly one in eight - recorded a ­decline in fee income. And eight more grew by less than three per cent.

Interestingly, no financial PR specialists fared badly, thanks to a bumper year in the City and strong client ­demand for financial services communications. However, the picture was much more mixed in the consumer PR sector, where the majority of agencies powered ahead but eight saw a revenue decline.

The B2B, healthcare and technology sectors appeared gene­rally strong, with poor performances very much the exception.

‘Clients want digital services but what is perhaps less obvious, albeit more helpful to us, is that in today's digital world some of the classic methods of advertising don't work as well, so more marketing money is coming our way.'

Murray says 2006 saw steady growth across all areas of the business, with crisis, financial, CSR/ethical branding, sport and healthcare all reporting ­excellent performances.

Weber Shandwick UK and Ireland CEO Colin Byrne also sounds upbeat, with the proviso that consumer PR was ‘tough'. Molly Hooper was brought in from Henry's House to head up youth marketing division SLAM and reposition it as more of a lifestyle practice.

‘The continued growth of healthcare was a big feature - we saw 30 per cent growth last year,' says Byrne.
‘Surprisingly, corporate and public affairs was a growth area for us, up 10 per cent after being flat for four or five years. '

Financial agency Citigate Dewe Rogerson, which enjoyed a seven per cent fee income rise to £20.4m, benefited from a buoyant year for M&A activity and IPOs.

‘A lot of overseas companies are choosing to float on the London market,' says CDR chief executive Jona­than Clare (right).

'It's a good place to be ­because it's properly regulated but with a reasonably light touch.'

Financial services PR specialist Lansons Communications scored 17 per cent growth, generating more than £1m above 2005's figure at £7.5m. The company diversified outside its core area last year, working for clients such as the Health Professionals Council and law firm Nabarro, so that around 10 per cent of revenues come from outside the ­finance sphere.

Growth, while welcome, is presenting some challenges. Lansons chief executive Tony Langham says that there is now intense competition to attract and retain the best people, especially at account manager and account director level where there is a shortage of talent.

This is exerting upward pressure on remuneration. ‘There is margin pressure,' says Langham. ‘You are looking at seven per cent salary inflation but fees aren't rising that fast.'

Rival financial PR business Penrose has also broadened its offer into what it is terming ‘FinTech' - the technology and data service companies that support the finance sector. Penrose deli­vered a 26 per cent jump in fee income, but its management is similarly concerned about the war for talent.

Penrose is one of 13 non Sarbanes-Oxley agencies with fee income between £3m and £4m. In the previous year, only six agencies fell into this band. Clearly, there has been good growth for mid-sized agencies.

Creating a ‘buzz'
One agency now in this grouping is Frank PR, which lifted its fee income by 33 per cent to £3.06m. CEO Graham Goodkind believes much of this growth can be attributed to the agency positioning itself as an expert in creating ‘buzz' around a campaign.

Frank delivered plenty of talked about PR in 2006, including its ‘Adopt a German campaign for Puma and a drive to save the British ‘caff' for HP sauce. It also capitalised on a World Cup year to promote Cancer Research's Race for Life in a campaign involving footballers' partners that spawned the subsequently ubiquitous term WAGs.

‘London seemed to be awash with money and even in a mid-sized PR agency the impact of accelerating globalisation is keenly felt,' says ­Camar­gue chief executive Andrew Litch­field.

‘Large clients that were not preparing bids or being taken over were ­rumoured to be doing so. This environment created opportunities and threats - most of which were impossible to legislate for.'

Fee income at the corporate and B2B specialist swelled nearly 17 per cent to more than £5m. Litchfield says the company's two regional offices in Cheltenham and Birmingham performed well.

Grayling group chief executive ­Nigel Kennedy says a decline in fee ­income for his firm relates to the event management division, partly due to a ‘squeeze' on the public sector, which has been a ­major events client over the past five years.

UK PR division income grew by 25 per cent in 2006 compared with 2005, while the UK PA business increased by three per cent. ‘As for trends, we saw a reduction in public sector activity in the UK while the private sector appeared to be spending more on public relations and public affairs,' says Kennedy.

Buying spree
Merger and acquisition activity ­coupled with rebranding exercises has led to the emergence of some new names and owners in our rankings.

Freshwater went on a buying spree, snapping up Black & White Communications, a specialist technology agency based in Romsey, in March, Sheffield agency Kath Harding PR in April and Clear Communications, a London-based health sector consultancy and training provider, in June.

Focus PR managing director Hilary Meacham says one reason her agency performed well, Strawberry ­acquisition aside, was due to an investment in staff dedicated to handling finance and HR matters, freeing up the owner managers of the business to concentrate on client work.

The proliferation of client procurement managers, she adds, though sometimes uncomfortable, has had its plus points, for example in the shape of longer-term rolling contracts.

Rainier managing director Steve Waddington says 2006 was the year the agency got serious about consumer PR, pointing to lots of opportunity in the ‘personal digital space' as a new string to its tech bow. Among the new clients last year was mobile advertising marketplace AdMob.

Demand for digital PR campaigns certainly grew during 2006, with ­clients increasingly aware that in the age of web 2.0 and user generated content, online has become the prime medium for reaching certain audien­ces. Specialist digital PR agency Way to Blue grew 16 per cent to break the £1m barrier for the first time.

‘One of my bugbears is that a lot of people who purport to do digital PR build web sites,' says Way to Blue founder Olly Swanton. ‘We don't do that - we employ communications people. This is the year that Taylor Herring poached one of my staff, which is annoying but it also shows that consumer agencies now realise that this is a medium worth investing in.'

Another agency to top £1m for the first time, with a strong 39 per cent rise in fee income, was sports outfit Pitch PR (see below).

Geronimo Communications, which enjoyed a 203 per cent rise in 2005, this time around fell back five per cent to £8.4m, in part due to its work on the Age Positive campaign for the Department for Work and Pensions coming to an end following the introduction of discrimination legislation.

Growth from clients such as Nin­tendo Wii and Motorola helped Cake lift its fee income by 33 per cent to £4.6m.

Eulogy! was another agency that ­exceeded 30 per cent growth, achieved to an extent by diversifying of its B2B core into consumer, which now ­accounts for almost a third of income. New business included a B2B and consumer brief for Wyndham ­Hotels.

Edelman followed its 22 per cent growth of 2005 with a more modest 11 per cent this time around, although that still represented an additional £2m in fees.

Areas such as corporate reputation, digital and branded content creation were strong performers and CEO ­Stuart Smith says that there has been good demand for cross-practice assignments, with healthcare clients for ­example realising they need to draw on consumer comms skills.

At the start of 2006, Edelman picked up the EMEA consumer PR brief for Microsoft's Xbox. 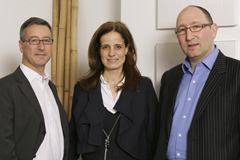 However, Robert Phillips, founding partner and joint head of Edelman-owned consumer shop Jackie Cooper PR, says he feels that the UK may be on the verge of a ‘squeeze in consumer spending' with a poten­tially nega­tive impact on consumer marketing budgets.

Indeed, a few clouds lurk on the hori­zon. There are too few experienced practitioners available to meet the growth in the market, putting a premium on talent and adding inflation to salaries (right: Stuart Smith, Jackie Cooper and Robert Phillips of Edelman-owned Jackie Cooper PR).

Consumer confidence is becoming more fragile and recent stock market jitters underline the fact that the strong performance of the Square Mile in ­recent years cannot be taken for ­granted.

Yet with many agencies talking about a healthy new business pipeline, the good times seem set to continue - for a while longer, at least.

A 39 per cent rise in fee income propelled sports and sponsorship agency Pitch PR through the £1m barrier in 2006.

MD Henry Chappell says being appointed as the lead agency on ABN Amro’s global sponsorship programme in December 2005 was one of the agency’s landmark moments. ‘That campaign won awards and really improved our standing,’ Chappell says.

‘Our success in big brand sponsorship, sports properties such as Wemb­ley Stadium and sports personalities such as footballer Rio Ferdinand has really put us on the map. People know that we can deliver on a number of different fronts.’

Chappell, a former Freud Communications director, founded the agency in 2001 and has grown it to 15 full-time staff.

Clients are spread across the UK, Europe and beyond, with major brands HSBC and Hugo Boss sitting alongside sporting stars such as Andy Murray. Other high profile clients include the Brazilian Football Federation and the recently launched Sport Magazine.