Presswatch monitored all national daily and weekend broadsheet and tabloid pap­ers to compile the chart, as well as around 300 consumer magazines and specialist healthcare periodicals, from 1 January to 31 December 2006.

With cancer being one of the biggest killers in Western society, newspapers retain a fascination with any hope
of cures – controversy over NHS funding of Roche drug Herceptin dominated coverage in the summer and autumn of last year.

Further research (not ill­ustrated) shows that 38 per cent of coverage of cancer was about breast cancer, with 11 per cent on lung cancer – this despite the fact that lung cancer is the biggest killer of men and women.

The second category  – immunology and anti-virals – includes inf­luenza and HIV. Coverage of mental health (third) was dominated by depression, foll­owed by schizophrenia, dem­entia and ADHD.

Health Watch will feature in PRWeek in each month of 2007, analysing trends in health coverage. 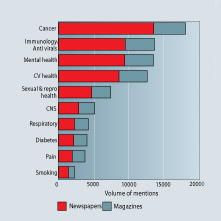