NEW YORK: Amid the isolation caused by the COVID-19 pandemic, pets have been providing companionship to millions of Americans.

About 23 million families adopted a pet between March 2020 and May 2021, according to the American Society for the Prevention of Cruelty to Animals.

While the threat posed by the virus has waned, millions of Americans still struggle with mental health issues, and pets remain a source of comfort.

That’s the message of a short animated film from Pets Are Wonderful Support NY, a nonprofit that helps New Yorkers care for their pets, with a particular focus on low-income older adults and individuals living with illness or disability.

The goal of the film, “The Bridge,” is “really to get people talking about the positive impact that pets can play on our mental health, and we hope to raise awareness for the work that we are doing here at PAWS New York to preserve these important relationships, which can, in many cases, be life-saving,” said Rachel Herman, founder and executive director of PAWS NY.

More than 40% of U.S. adults have experienced high levels of psychological distress at least once during the pandemic, according to a Pew Research Center report published in December.

“The client demographic that we serve is often unseen, because our clients in many cases are dealing with mobility impairment or health issues,” Herman said.

In the four-minute film, which premiered on January 12, the viewer sees a man wearing a sad expression and looking at a picture of his family as a voicemail plays. “Can you say, dad-dy?’” a woman in the voicemail asks her daughter, who then says it. “She’s getting pretty good at dad-dy.”

As he ventures out, a car stops. Someone tosses a dog out and the car drives away.

The man and animal then wander alone through the city, which has no interest in either of them.

As Lou Reed’s “Perfect Day,” plays in the background, the two encounter each other once again, walk along a bridge and develop a bond. But the man’s depression deepens to the point where he considers jumping to his death. The dog appears just in time to save him. He then brings the animal home and starts a new chapter. 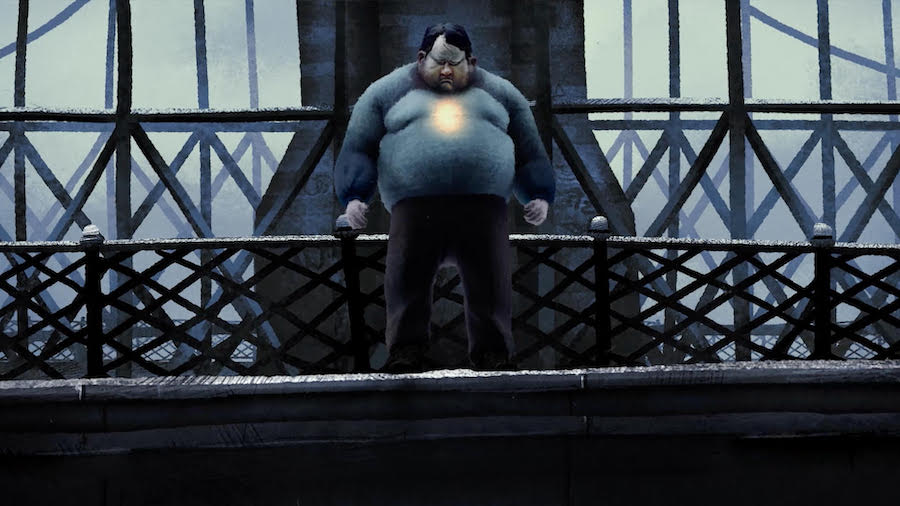 “When someone rescues an animal, they’re also rescuing themselves,” a message in the film says. “Help us keep life-saving connections alive for New Yorkers in need at PawsNY.org.”

The film, which was written and produced by Klick Health and animated by Lightfarm Studios, is set primarily in dark grays and blues.

The colors “were a metaphor for that depressed state, and as the man and the dog begin to form that bond, that bluish gray turns into that warmer orange,” said Amy Fortunato, VP and group creative director at Klick, which along with Lightfarm, worked on the campaign pro bono.

The filmmakers chose Reed’s 1972 song, featuring the lyric “You just keep me hanging on,” because “we wanted to capture that melancholy, so we explored multiple songs, and when we landed on the Lou Reed song, it was so perfect,” Fortunato said.

The creators plan to promote the film on the social media channels of PAWS and Klick.

“I’m hoping that we have the opportunity to not just raise awareness, so we can raise money and get more social media followers, but to get the word out so we can help more people,” Herman said. “That's what we are here for, is to be able to help as many people and pets as possible.”