While it’s always been possible to paint a global picture of one’s choosing using selective headlines, in recent months the dark and greyer shades on the palette of world news have increasingly obscured the lighter and brighter ones.

Persistent existential concerns, such as climate change, only continue to build and loom larger. Russia’s invasion of Ukraine appears destined to become a war of attrition bent on wreaking havoc with energy prices. This is turn, is adding to inflation rates, especially in Europe, pushing up interest rates that squeeze money flows and slow the economy further. Then, even in less affected regions like the Middle East and Asia, we have growing political tensions like unrest in Iran and new potential Cold War with China.

Few can take in the entire picture all at once like S4 Capital CEO Martin Sorrell. But when asked a rather innocuous question about what clients’ are concerned with during his recent trip to Korea, all of the above was splashed onto the canvas, which is telling.

“Given what's happening in the world, clients are very focused —much more than I thought they were going to be—on where they are doing things and where they will place their bets. They’re being very careful,” Sorrell told Campaign.

The concerns, Sorrell said, extend beyond the current recession, which is likely a short-to-medium challenge over the next couple of years, to longer-term planning over the next three to five years.

“Because of the tensions I referred to, the world is becoming a much more fragmented place. Clients are very conscious that they’re going to have to pick where they expand in a very different way,” Sorrell said. “Historically, if you planted your flag anywhere, as long as the demographics were good, you did well. That may no longer be the case. What you have to do now is to be much more selective geographically about where you where you're going to be.”

What it means, said Sorrell, is that the Americas, the Middle East and parts of Africa remain relatively attractive. “Asia will retain its importance, but maybe the pattern of development will be slightly different,” says Sorrell, with a caveat being the outcome of the current discord between the U.S. and China.

Lest one get the impression that investment decisions are an imperialist exercise with maps unfurled, Sorrell was quick to caution that industry shifts such as the accelerated decline of analog and increased importance of digital transformation in recession are just as critical in guiding client spend in the coming years.

Weighing both industry trends and geographic resilience Sorrell said his own company would “expect to grow and be more aggressive in APAC.”

In China, Sorrell is hoping Beijing takes more steps to stimulate the economy after the toll that zero-Covid policies have had on consumer sentiment. S4 Capital would like to expand its operations there, Sorrell said, but “it hasn’t been easy." In the company’s recent Q3 trading update, China’s slowdown was cited as a factor behind Asia Pacific’s relative slower growth compared to other regions.

Growth and "being aggressive" will also look and feel differently for S4 Capital than it has in the past, after applying the brakes to new hiring and acquisition spending this summer after running into cost and accounting difficulties following years of accelerated expansion.

“Given the challenges that we’ve had recently, we have to focus on organic growth,” said Sorrell, who pointed to recent results as evidence that there is plenty of growth that can be achieved with its existing capabilities. Indeed, S4 Capital’s headcount of just under nine thousand globally at the end of Q3 was slightly lower than the previous quarter as a hiring freeze sets in. However like-for-like billings in the quarter were up 23% from a year ago and like-for-like revenue and gross profit were up 29% and 28% respectively.

Exactly how rising inflation is affecting staff expenses is a matter of some debate. In the digital sphere, companies like S4 Capital have been 'wrestling’ with strong labour demand and competing with big platforms for top talent for several years now. Sorrell sees salary inflation as "nothing new.” If anything, Sorrell said, some of the recent staff pullbacks at the big platforms “will take some of the pressure off” salary increases.

Nonetheless, all employees will be dealing with higher inflation costs and the question is whether companies should do more to help.

“The question about cost of living is a really painful one for everybody,” Sorrell admitted, citing the UK experience where households have gone through an energy price crisis and are about to go through a mortgage cost crisis as interest rates rise.

But Sorrell sees a greater role for governments in alleviating these pain points than companies. And while Publicis received some good publicity for handing out a ‘cost-of-living bonus’ last quarter, Sorrell said the French holding company was merely gifting an extra week’s salary to make up for lost incentives that it failed to pay out during the pandemic.

One silver lining for a UK-based global company like S4 Capital has been the decline of the pound sterling. While the currency has rebounded significantly from Britain’s self-inflicted fiscal crisis at the end of September, the pound remains significantly undervalued on a historical basis. 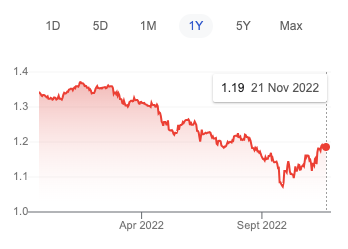 “Those companies that are reporting in weak currencies (and everything now is weak against the dollar) and have operations in America like we do are in a very strong position,” Sorrell said.

In short, the macroeconomic picture may look glum, but there are mitigating factors and even steps companies can take to find opportunities.