The quest for the ideal hybrid working model is a battle of convenience versus culture, of increased productivity versus mission creep and of action versus activity.

For most people, the absence of a daily commute has been a blessing but it has come at a cost – that sense of being always ‘on’, always available. In other words, the new presenteeism. Working days have been extended by stealth.

The return to office has been greeted with indifference by some, relish by others. Managers and leaders are still searching for the perfect solution to creating a meaningful team/corporate culture in a hybrid or virtual world.

Busier but more productive?
“There’s a sense of overwhelm,” said Becky Murch [main picture], head of internal comms for the NHS’s Bristol Clinical Commissioning Group during a WTV roundtable at the recent PRWeek UK SIC Summit. “It’s not going in a good direction and we need to put boundaries in place.”

Natalie Lord, UK head of internal comms at engineering firm WSP, spoke for many when she said: “I’m not sure that I’m delivering any more than I was pre-pandemic but it just feels so much busier.” Katie Johnson, internal communications business partner at recruiters SThree, joked: “At the start of the pandemic, I was doing emails coming out of the shower!”

For Sarah Hinton-Smith, director of comms for wealth and markets at NatWest, Zoom fatigue is partly caused by the medium’s default setting: no one books a 10-minute call, it’s in the calendar for an hour, maybe 30 minutes if you’re lucky. “There is a formalisation of conversations that would have happened naturally and spontaneously before, but now happen either through email or Zoom call,” she said.

“There have been a lot of mixed messages from leadership,” said Johnson. “Wellbeing became a buzzword as much as ‘unprecedented’ had been. But people became fed up with the wellbeing message because we’d gone through a load of redundancies and the workload hadn’t changed.”

Helen Kavanagh, UK head of sales at WTV, admitted to being “guilty of panic communications”. She explained: “Sometimes I will send or receive messages by three mediums – that sense of busy-ness is not productive and can be emotionally draining.”

Trish Rees, internal comms manager at Gamma Telecom, wondered if there was an unintended consequence of the furlough scheme: “There was a pressure on other teams to pick up that work,” she said.

Boundary markers
Flexible working doesn’t work for everyone, as James Brown, CEO of virtual communications agency WTV [pictured bottom], explained: “We had an all-business call and someone asked if the leadership could stop sending emails at 6am or on a Sunday evening. It was a very good point about intruding into people’s lives.” He explained that, ouside core hours, if you do send an email you shouldn't expect a response, nor should recipients feel obliged to respond.

In theory, hybrid working empowers employees and gives them choice. But teams still have to function and many people want or expect structure to their working lives. Murch explained how her (public sector) organisation had previously removed the core-hours directive from job descriptions to allow for flexible working but has since re-inserted it to avoid the sense that working days were open-ended. “We can't have people putting meetings in our diaries at seven or eight in the morning just because it suits them,” she said. “Staff have asked for more direction – they’re still looking for that permission,” she said. Brown added: “It’s about leadership by example.”

Many contributors agreed that the UK was something of an outlier in terms of struggling to combat excessive working hours. Colleagues in continental Europe have much clearer work-life boundaries.

“There’s a cultural challenge,” said Tasneem Shahpurwala, internal audiences and channels manager for global engineering consultancy Mott MacDonald. “How I work here in the UK is quite different to our colleagues in Hong Kong or India. How do you make it equitable for everyone?”

How to hybrid
One striking example of the cultural shift is the announcement in April by HSBC that it was getting rid of its entire executive floor at Canary Wharf with the C-suite now hot-desking.

“We have a fluid policy on how to use our office now, which I don't think is going to change anytime soon,” said Charlie Thompson, marketing director of WTV.

“When you come into the office there should be a purpose,” said Josh Vickers, WTV’s video and innovation director. “A meeting should be properly structured with an objective.”

Kavanagh added: “There’s an obligation to attend [virtual] meetings, but if I was in the office I’d say I don't need to come to that – give me a sentence afterwards.”

Brown described a strong balance: “Working from home when you can, avoiding the commute but conserving that time if you are physically at an office, recognising that there is value in building up the neural networks that develop within an organisation and the casual conversations.”

Access for all
For all the concerns and frustrations about remote and flexible working, Murch highlighted this important upside: “Remote working has enabled some people to work full-time because of various illnesses or disabilities. Ultimately, it’s about the employee, enabling everybody to bring their best selves to work.” 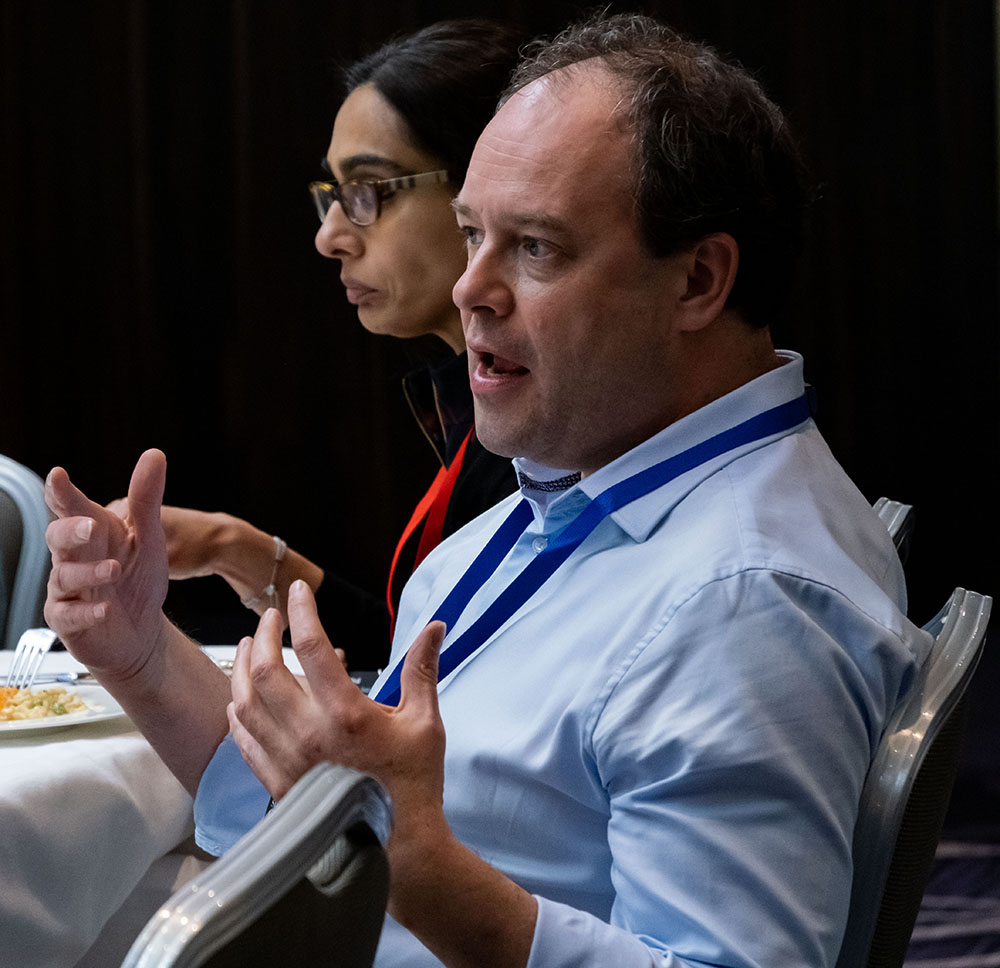