Adspend from app owners flowed to Android in the first two weeks after Apple launched its privacy feature in the latest version of iOS, data from Warc and AppsFlyer shows.

Apple introduced app tracking transparency in iOS 14.5, which launched on April 26. Early data showed the vast majority of iPhone users who had installed the update were opting to block advertisers from tracking their behavior across apps using Apple's ID for advertisers (IDFA). According to Warc, only 11% of users globally and 4% in the U.S. have enabled app tracking when asked whether they wanted to do so.

Data reveals that over a nine-week period starting at the end of March, when the industry was preparing for Apple to reveal the release date of iOS 14.5, adspend on app installs on Android experienced a significant boost, while on iOS it languished.

Compared with the week ending March 28, spend on both platforms was down over the first three weeks. But on Android, it rose above this level just as Apple confirmed the release and was up substantially over the next five weeks.

On iOS, meanwhile, the equivalent spend was below its starting point right up until the last week of the period, ending May 23. 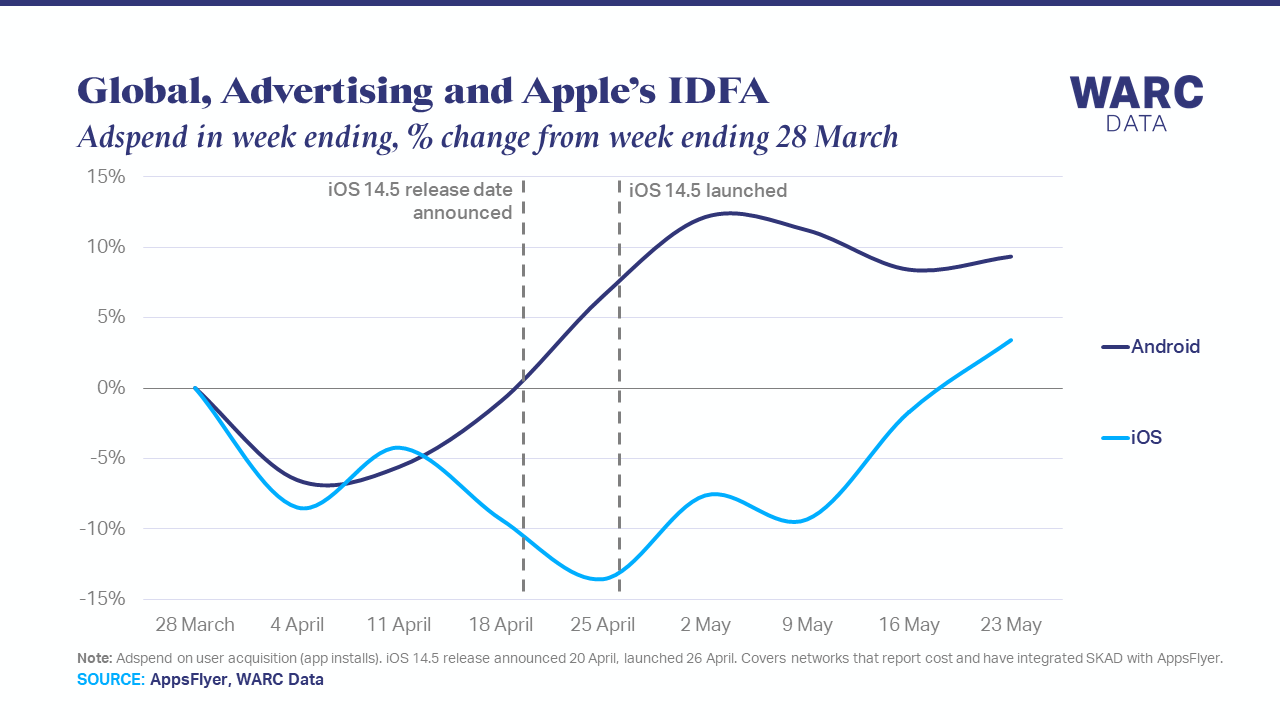 Although the gap has narrowed, the researchers claimed the finding “poses a fundamental challenge to the more than $200 billion spent on mobile advertising, which is reliant on targeting, personalization and attribution."

Paul Kasamias, managing partner for performance at Starcom, said part of the reason for the shift was how in-app advertisers use algorithms to advertise on what appears to be the best inventory. With tracking dwindling on Apple, the technology was always going to steer spend to Android.

“It’s likely with the loss of data, iOS activity could be seen as performing worse than Android, with budgets shifting based on automated optimisation rather than a strategic decision,” he said.

“In the short term, iOS spend is likely to go down based on existing automated optimization and operational setup. Whereas, in the long term, it’s too important for advertisers to ignore; they will need a rethink in their strategic approach.”

Robert Clapp, the analyst at Warc who interpreted the shift in ad pend patterns from AppsFlyer figures, partially agreed that automation is playing a role.

However, he pointed out the rise in Android growth, and corresponding dip in Apple's growth, roughly coincides with iOS 14.5's release date. This would suggest, he said, a human element of switching budgets to Android in anticipation of the lack of user data. The very latest figures suggest this is now levelling out "now marketers have had a chance to see the lie of the land," he added.

Drop is less severe than it appears

Maz Hussain, director of media and platforms at digital marketing agency Croud, said the decline in iOS adspend could appear worse when app marketers' budgets are examined in isolation. Adspend on encouraging people to download new apps has dropped significantly, he agreed. However, when all mobile advertising is taken into account, he estimates the overall drop in Apple adspend is around 5% since the launch of iOS 14.5.

“It dropped instantly with the launch of the new operating system but it’s remained stable ever since,” Hussain said.

“It’s very easy for marketers to set up mobile campaigns based on cost per installation figures and that means the technology will prioritise the platform with the most tracking data. We think this will level off as Apple improves how it sells audiences and when more advertisers start using server-side tagging to record who has seen their advert and later converted.”

The mobile world turned upside down

Although the effects of the switch to Android will not last forever, Abbie Howard, account director at Dentsu X, said they were profound in the short term. The reduction in spending on Apple devices is prompting ad executives to plan and buy campaigns in a very unusual mobile advertising landscape.

“The pull back has led to some interesting changes in the market, with usually more premium iOS inventory dropping in price and Android CPMs becoming increasingly inflated as advertisers fight for a presence,” she said.

She predicted Apple users would be far too important a market for advertisers to ignore so more brands are going to be trialling Apple’s new SKAdNetwork attribution tool. This is a way for Apple to share data on who has seen in-app ads without passing on identifying information.

“I’d predict we will start to see this revert back over the next month, as advertisers who initially panicked on April 26 have seen the dust settle, completed some initial testing on SKAdnetwork, and want to get back out there,” she said. “Particularly in the U.K., most advertisers still see iOS users as higher value and they will want to avoid missing out on just over 50% of market share for any longer than they absolutely have to.”

She warned that the need for advertisers to move on from relying on IDFA data will only intensify over the next few months as more people update to iOS 14.5.

At present, only around a fifth of iPhone users are believed to have updated. This is expected to increase significantly as Apple rolls out the update more aggressively, culminating in it being pre-installed in new models from this autumn.