Advertisers don’t seem to be learning their lesson when it comes to avoiding hate speech online while advertising programmatically.

An analysis by Nielsen of more than 1,280 URLs show that brands are consistently and unintentionally placing ads next to anti-Asian hate speech by relying on keyword targeting.

The study, published on Thursday, used AI to identify more than 5,000 ads placed next to anti-Asian rhetoric in the last year, including 250 placed in the last quarter.

Approximately 20% of the hate speech URLs were published in 2021 and were funded by a number of ad categories. Apparel brands, department stores and media companies, for instance, contributed $4.1 million, $6 million and $29.7 million to these sites, respectively.

Ads appeared alongside words and phrases such as “Blame China,” “Wuhan virus” and “China bioweapon.”

The results demonstrate that brand safety is still a rampant and far-reaching issue online, as calls to support the Asian community grow louder in the wake of hate crimes and violence toward Asian Americans.

For marketers, the report is yet another data point to re-evaluate programmatic advertising strategies.

In Q1, more than $153 million in digital advertising was spent on digital news sites flagged for including hate speech against Asian people, which 38.1 million people visited. At least 66 brands appeared adjacent to hate speech, including ads from more than a dozen Fortune 500 companies. 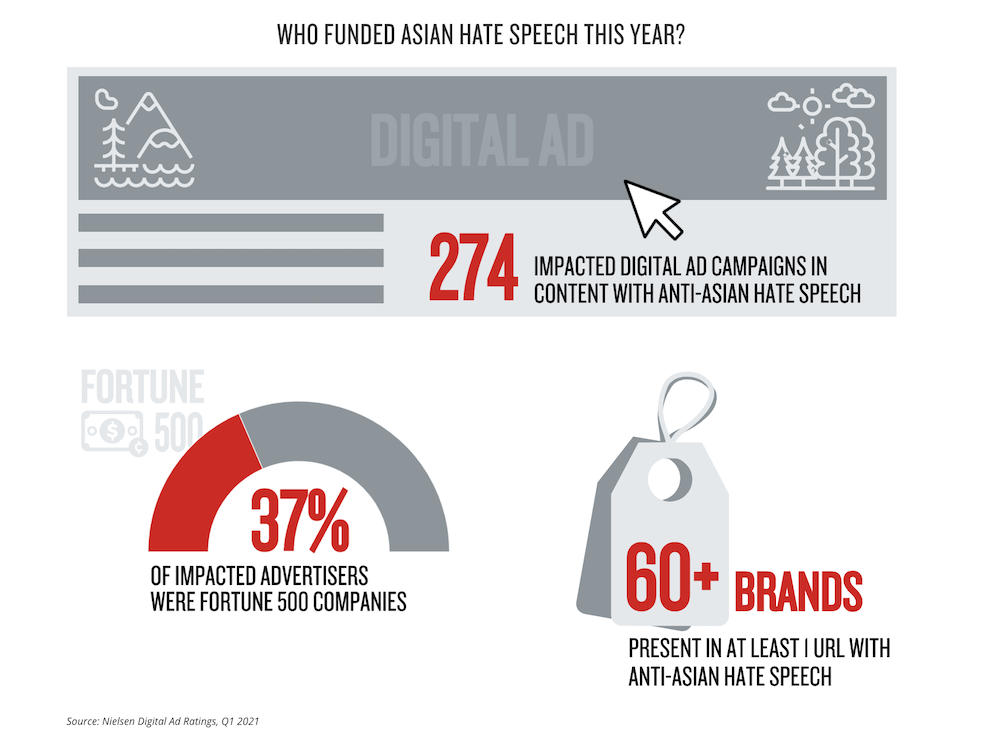 While ad spend against digital content with hate speech generally declined in the first quarter, the issue calls for increased awareness among brands of where their ads are appearing, as well as a constant review of algorithms that fuel digital ad placements.

Over the past year, hate crimes against Asian Americans have increased 150%. Recently, the Senate approved a hate crime bill that aims to prevent further violence against the Asian American and Pacific Islander community with bipartisan support.