The NCA launched the campaign in February in response to growing concern about the level of gun crime in the UK. According to the NCA, there has been an upward trend in recorded offences since 2014, with a “fluid supply” of weapons and illegal ammunition “increasingly available”.

Today we launch our #KnowTheGun #KnowTheLaw #KnowTheConsequences campaign, after NCA activity alone led to 552 seizures in the last two years.

We are warning young people: “You only get one shot in life – don’t blow it.”

The campaign was intended to raise awareness of firearms laws and prevent illegal firearms from entering the country and it targeted people suspected of being involved in illegal firearms possession and use. 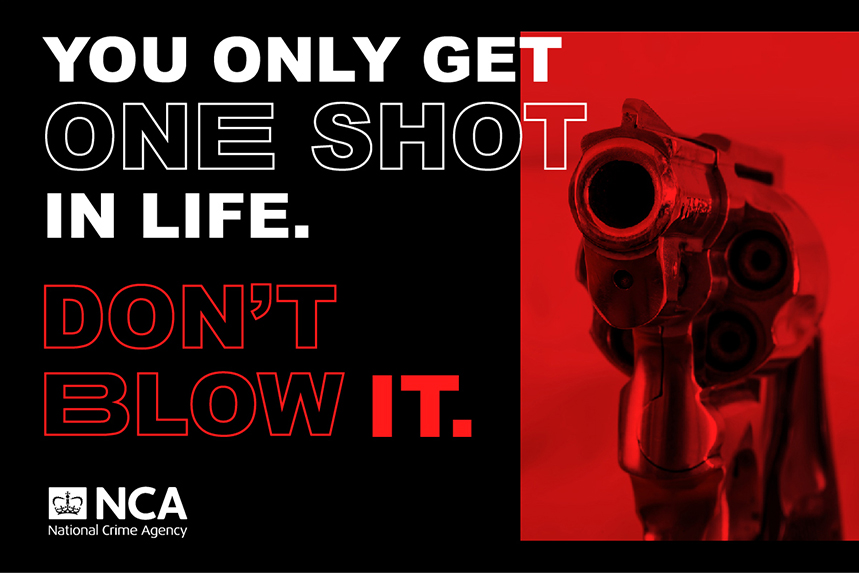 Its social media toolkit stated: “Based on threat insight, our key target audience is those aged 16-25, but we also hope to capture the attention of organised crime groups with widespread campaign messaging.”

In a warning to young people about the dangers of illegal firearms and how their lives would suffer if they broke the law, the campaign used targeted online ads on channels including Instagram, Facebook and Twitter.

“You only get one shot in life – don’t blow it,” was a key message used in campaign materials, as well as a call for people to contact Crimestoppers with any information about illegal firearms.

We're supporting the @NCA_UK firearms prevention campaign, #knowthegun #knowthelaw #knowtheconsequences. If you are concerned about firearm activity in your area, please report it to us on 101 or 999 in an emergency, or stay anonymous and report to Crimestoppers on 0800 555 111. pic.twitter.com/UAjPjRgCXi

Tracy Garcia, strategic comms manager at the NCA, said: “Our firearms prevention campaign was a first for the agency and we consciously took on a partnership approach to ensure we effectively reached our audiences and increased reports into the Crimestoppers helpline.”

The campaign resulted in a surge in reports relating to illegal firearms, with calls to the Crimestoppers helpline increasing by 18 per cent in the eight weeks after the launch. In addition, it reached three million people online through social media channels.

Tom Esslemont, head of comms at the NCA, added: “We hope that, as well as continuing to ensure people report illegal weapons entering the UK, this work raises awareness more generally about such an important national security threat.”

The campaign was part of a “pursuit against firearms criminality”, according to Matt Perfect, senior manager, NCA Firearms Threat Leadership Command. “The campaign demonstrated that with a collaborative and partnership approach across many government and private sectors, we can reap huge rewards,” he said.

“The increase in public reporting provides real opportunity to remove some of the most dangerous criminals from our streets, protect our communities and save lives.”