PR professionals are increasingly being asked by clients for comms advice on climate change, but much more work is needed to “level up” knowledge about the issue.

A new study by the PRCA and Opinium, Climate Crisis Misinformation, which polled 200 comms professionals, found three-quarters feel that more needs to be done by the industry to tackle misinformation about the climate crisis, and a similar proportion (71 per cent) are providing more advice on the issue than they did five years ago.

Six in 10 PR professionals are concerned that clients are too eager to jump on a bandwagon talking about the climate crisis rather than acting. Almost one-fifth (17 per cent) say their clients’ knowledge of climate change is incorrect or misinformed; 39 per cent feel some hesitancy over advising clients to contribute to the discussion because they are not an expert; and 18 per cent say that having their clients contribute to the discussion on the climate crisis “makes them feel nervous”.

Compounding the issue is that 59 per cent of PR professionals do not feel that the organisation they work for is doing enough to tackle the climate crisis, rising to two-thirds of those who work in agencies.

One agency that is renowned for being ahead of the curve in acting and advising on climate change is Don’t Cry Wolf.

Founder and chief executive John Brown, who leads the PRCA’s Climate Crisis Strategy Group, told PRWeek that the industry needs to focus on how to “level up” the understanding of sustainability and the climate crisis, particularly beyond the superficial understanding of buzzwords and trends.

“An example is that you can't move these days without there being another announcement around net zero,” Brown said. “I don't think there are an awful lot of people in this industry that genuinely understand what that actually means and how hard it is to get there.

“There's been an exponential rise in net zero declaration, but out of that only seven per cent of businesses show evidence of their progress.” 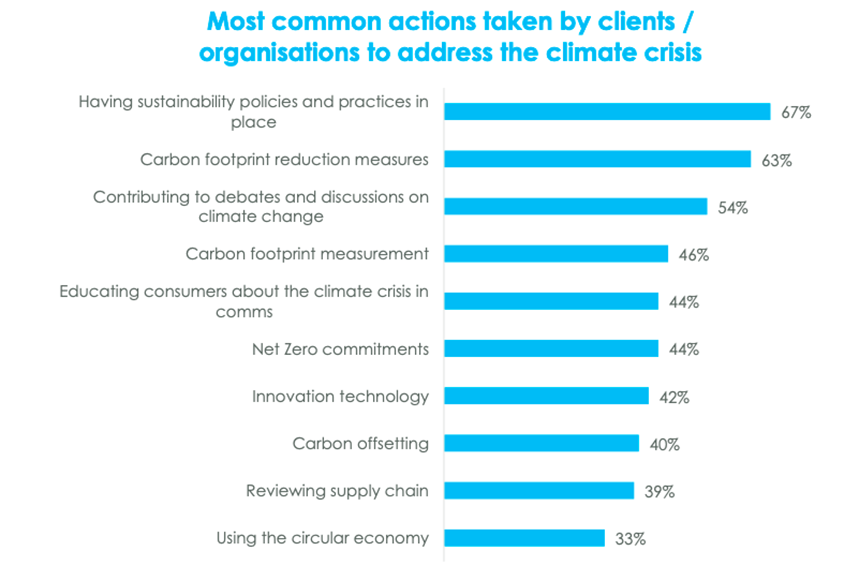 Brown told PRWeek it is important to help shine a light on some of the more substantial climate-change activities companies are involved in that may not appear as “sexy” to the consumer.

“There's some great work that's taking place in preserving Scottish peatlands, which might not have the same sex appeal as purchasing a part of the rainforest, but actually is deeply important from a sustainability perspective,” he said.

On the finding that the majority of PR professionals are nervous about clients being too eager to jump on the climate change bandwagon, sometimes for fear of being caught ‘greenwashing’, Brown believes a bigger problem is clients focusing on trivial consumer sustainability initiatives, rather than those that will deliver substantial change.

“One of the largest oil and gas organisations on this planet is sharing footage around reusable or compostable coffee cups now, and saying that it's in support of this sort of innovation,” he pointed out.

“That might not necessarily be ‘greenwashing’… but its comms team, somewhere along the line, has said: ‘You know what, bamboo coffee cups are still really sexy, let’s focus on that', rather than talking about the decarbonisation of the energy industry, which accounts for about 25 per cent of global emissions." 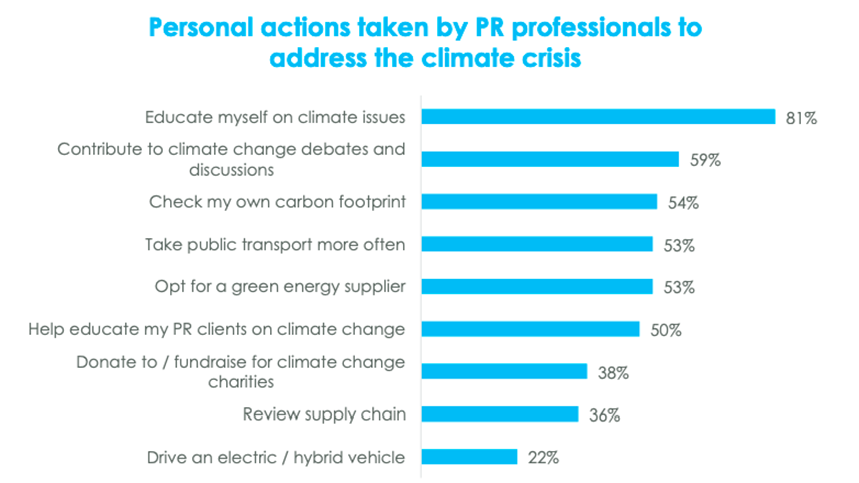 Brown fears the corporate conversation about sustainability and the climate crisis will often remain at a superficial level until the communications industry guides clients toward more meaningful contributions.

“There's definitely an appetite for Big Energy to get more deeply involved in conversations that have to genuinely take place, such as decarbonisation, job movement, new technologies, innovation investment,” he said.

“I wish they would have the confidence to drop some of the deflection and actually be prepared to stand up and have these discussions, and I wish they'd been prepared to show a little bit more vulnerability.

“I'm hoping… the process that we're going to be going through with this working group [will] at least give comms professionals a clearer understanding of what's taking place.”

Moving beyond the superficial is important for cut-through. In a complementary study of 2,000 UK adults, nearly half (47 per cent) of social-media users admitted to consuming content about the climate crisis in the past month that they felt was either made up or exaggerated.

Hill+Knowlton UK CEO Simon Whitehead told PRWeek there is a huge opportunity for the industry to advise clients on decarbonisation.

H+K, which has several industrial and energy clients, is working on several briefs to provide a narrative around decarbonisation and the energy transition to net zero – a “huge area of growth”.

“So COP 26 happening in Glasgow in November is the ideal scenario for UK public relations firms to get their act together around how they are advising big industrial groups on how they are delivering a better impact through their sustainability strategy and communications.

“It is something that every company now needs to have laser focus on and get the messaging right in how they are setting out their strategy. That's, of course, what the PR industry can help clients with.”