Attributes of a self-starter were noted necessary qualities. During my interview, I responded with confidence, backing myself up with anecdotal examples from previous employment. Once in the job, it might be possible that the self-starter detail – required of all RNLI’s 200 volunteer press officers – slipped my attention.

My initial three-day training course continued. Spread over a few months, Paul, my Regional Media Officer (RMO), visited Newhaven to cover modules including Incident Handling, Media Interview Logistics, and Interview Skills. I remember feeling excited on these days to have a purpose with which I was able to head down to the station.

Yet, on a practical level, the coast seemed strangely quiet – both literally and figuratively. I wondered when I would be called to action with an opportunity to turn these newly acquired competencies to effect.

Perhaps it was time to brave up and use the key to the station that I had been issued.

I turned up without appointment and was greeted with a happy absence of fanfare. Kettle was duly boiled. Lewis, coxswain (no acronym), and Gary, deputy launch authority (DLA), resumed their tasks, while I spuriously got out my laptop and made friends with Oscar the Labrador, one of three canine regulars at the station. 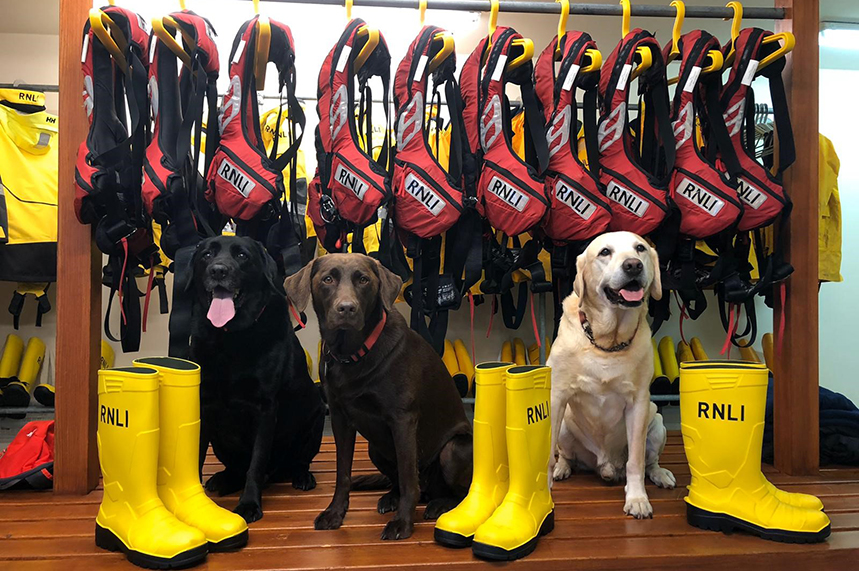 Chat meandered, smattered with mysterious lifeboat-related lexicon. What I did establish was that the station had been far from quiet. I was simply missing the beats: launches, fundraisers, weekly training – both on station and out on the water – maintenance, kit updates. The list went on.

If I was serious about saving lives at sea, I needed to review my commitment and work out how I was going to get myself connected.

My predecessor, James, a navigator on the crew, had suggested I pop in during a training session as it provided a good chance of getting to know some of the crew.

With young children and a regularly travelling husband, this had proved tricky to achieve. But I made it my mission and managed to get along for the close of a Wednesday evening casualty care session.

Technology bridged another significant gap and I got registered on the crew pagers launch request, alerting me to all Newhaven tasking in real-time. I was also added to Whatsapp groups for operations and crew (brilliant for picking up the vibes and tone of voice) and copied on calendar invitations for training. I was starting to get a feel for the rhythm of the place.

In no time, my first press release opportunity materialised. The text pinged: Launch ALB. Minutes later, duty coxswain confirmed attending crew. Down the line, we honed this process, with the DLA adding brief launch and casualty information, enabling me to determine immediately the scale of potential media interest.

On this occasion, the crew received back-to-back taskings. Having successfully towed a yacht with engine failure to harbour, they were diverted to reports of a sighted life-ring which, on retrieval, was discovered to be well-barnacled and no cause for concern.

Whatsapp confirmed the crew as back on pagers. With allowance for a tea and toast reprieve, I checked in to seek facts and footage.

My first release was picked up by local media. Not before Paul improved the flow with his edit. I felt tapped-in and operational. All speed, I tweeted the story, noticing the headline the next day: ‘Towed back to birth’ – oh yes!