When Campaign revealed on January 8 that Publicis Groupe had talked to a private equity investor about a possible sale or transaction, the share price briefly shot up more than 7% to a 15-month high of €46 ($56).

Campaign reported the talks had taken place as recently as December and pointed to CVC, a major European private equity firm, as a potential suitor but made clear that no formal discussions or negotiations are under way.

Publicis had declined to comment to Campaign ahead of publication of the story but went on the record afterwards, because of the share price reaction, to emphasise: “There are no talks of any sort going on.”

However, when pressed about whether talks had taken place in the recent past, the French agency group again declined to offer comment or guidance.

CVC, which has stakes in sports media rights and the PR and corporate advisory firm Teneo, also declined to comment.

A person familiar with CVC’s thinking subsequently indicated the private equity firm is not interested in investing in Publicis, which is valued at about €10.6 billion (£9.4 billion/$12.9 billion).

The less-than-comprehensive denials do not contradict Campaign’s original story that the two sides had discussions of some kind, without the talks progressing.

Companies will often meet to share partnership ideas but it is thought these discussions had greater substance.

The M&A speculation points to a wider trend as investors are looking more favorably on the agency sector, after several years of lackluster growth for most of the big six holding companies as they have struggled to restructure and digitize their operations in response to clients’ changing needs.

Publicis, which is led by CEO Arthur Sadoun, has shown notable signs of improvement.

It was the second-best performer in Q2 and Q3 2020 (behind Interpublic Group), amid signs that Epsilon, its recently acquired data business, had insulated the group from the worst of the coronavirus slump.

Analysts at Goldman Sachs published a research note in response to Campaign’s story, in which they said: “We believe renewed private equity interest in the ad agency space would offer positive read-across for the industry by signalling confidence in the structural and macro outlook for these businesses.

“This also suggests cost-cutting potential of the ad agency space, where 70% to 75% is staff cost, with further efficiencies to be gained in property cost in a post-COVID-19 world.

“In our view, this also highlights potential portfolio optimization opportunity – we note that WPP has embarked on a simplification process, with the sale of £3.5 billion of non-core assets since 2018, including a 60% stake in Kantar, allowing the company to focus on faster-growing areas, such as digital transformation.

“Meanwhile, Publicis also disposed of assets such as PHS and Proximedia in recent years.”

The share prices of the big agency groups have rallied since spring 2020 as the ad market recovered more quickly than expected.

“Investors feel more comfortable with the agency model than they were six months ago,” Ian Whittaker, former head of media and digital equity research at investment bank Liberum Capital until 2020, says. “These businesses are probably more structurally resilient than people thought [when the market slumped].”

However, the agency groups’ shares still remain well below their most recent peaks in 2017.

That compares with valuations of eight to 12 times earnings during the past decade, according to Goldman Sachs.

Whittaker says: “It’s been the case for a while that the [legacy] agencies have been seen to be undervalued, as they have traded on low profit multiples in terms of the wider market.

“If people suddenly decide that these businesses have a bit more growth in them and there’s a cost-cutting story, then you get a re-rating [and the valuation rises].”

What’s more, some industry observers point out that there is a disconnect between the performance of the legacy agency groups and the new breed of agency and ad tech players such as S4 Capital and The Trade Desk, which have been booming because of their focus on digital and data.

Publicis Groupe’s annual revenues of about €10 billion ($12 billion) are roughly the same value as its stock market capitalisation.

By contrast, The Trade Desk’s revenues are about $800 million, yet it is valued at about $36 billion. That makes the adtech firm worth about the same as the three largest agency groups, WPP, Omnicom and Publicis, combined.

All of which could make agency groups attractive to investors looking for value.

Private equity has been wary of big agency groups

Typically, a private equity firm will hope to generate significant returns by investing in a business that is high-growth or needs restructuring outside the glare of the stock market. Legacy agency groups fall into the latter category.

“Some of the holding companies are ripe for a PE takeover because if you look at them, they have growth issues because of the profile of their business and margin issues because of being on the public markets and having to sustain margins to protect their share price in a low-growth environment,” a senior industry figure says.

“If you were take one of these businesses private for a few years, change the profile of the business, get it growing again and improve the margin, then you’ve got a much better ‘re-float’ [back on the stock market] in a few years," the source adds.

However, Lorna Tilbian, chair of Dowgate Capital, a stockbroker that advises S4 Capital, says that many PE investors have been wary of big agency groups because they are “people businesses” and revenues can be unpredictable.

“Advertising is cyclical and operationally geared; if the revenue falls, costs don’t fall commensurately,” Tilbian explains. “Then they’re lumbered with costs and if you take on a lot of debt, you can’t pay the interest.

“One thing that has changed is that the agency sector is now more about digital, data and analytics. It’s less reliant on people and more reliant on technology," Tilbian adds. “It’s less cyclical and I think that’s more appealing to private equity,” even though the magic of the ad industry is still about “the creativity and the people."

Bain’s investment in Kantar in 2018 and KKR’s stake in GfK in 2017 are two examples of PE firms investing in data marketing businesses in recent years.

Private equity bidders also looked at Merkle, which was bought by Dentsu in 2016, and Epsilon, which was acquired by Publicis Groupe in 2019.

One of the big agency groups, such as WPP or Publicis, would cost two to three times as much, making it difficult for any private equity firm to mount a bid on its own.

It is more likely for several PE investors to team up on a deal of this scale, according to Tristan Rice, a partner at SI Partners, a corporate advisory firm.

Bigger deals could be on the agenda as the global economy recovers from the COVID-19 downturn and investors seek returns.

“There’s such a wall of cash sitting in PE firms and they are under pressure to deploy it,” Rice says. “The issue now is scarcity of quality assets to invest in. When there’s an over-supply of cash, you tend to get more ambitious deals.”

Even so, he says PE investors are likely to remain cautious about an acquisition as large as Publicis because of the scale – “and when you factor in the fact that the biggest asset is the people, it’s risky and complicated compared to buying an FMCG."

Any bidder would be expected to pay “a significant premium” for Publicis above its current share price, Bloomberg Intelligence said, following Campaign’s story about sale talks.

With hindsight, a private equity investor that, hypothetically, was looking to invest in one of the agency groups missed the opportunity to buy at a cheap price a couple of months ago.

The stock was still trading at about €29 ($35) as recently as October at the time of its Q3 results.

“It is increasingly clear that Publicis is performing materially better than most expected yet it still trades at a material discount to peers,” analysts at Citigroup said at the time. “The key point is that growth trends are coming in materially better than bearish expectations and the challenge is to work out why: is it because the market is just too cautious on the gearing of the agency model to acute short-term economic pressure or is it because the model is structurally more resilient than the market assumed?”

Citigroup added: “It is still too early to be definitive on this point, but we think there is a growing argument for saying the latter.”

Investor confidence improved in November, following successful trials for several coronavirus vaccines, plus there was more evidence of the resilience of the agency model as adspend held up better than expected in the final months of 2020.

Suddenly, what might have looked like a potentially attractive deal in October – even if a bidder had to pay a premium – was one-third more expensive.

In those circumstances, a would-be buyer might have concluded that a deal no longer made sense at that higher price. 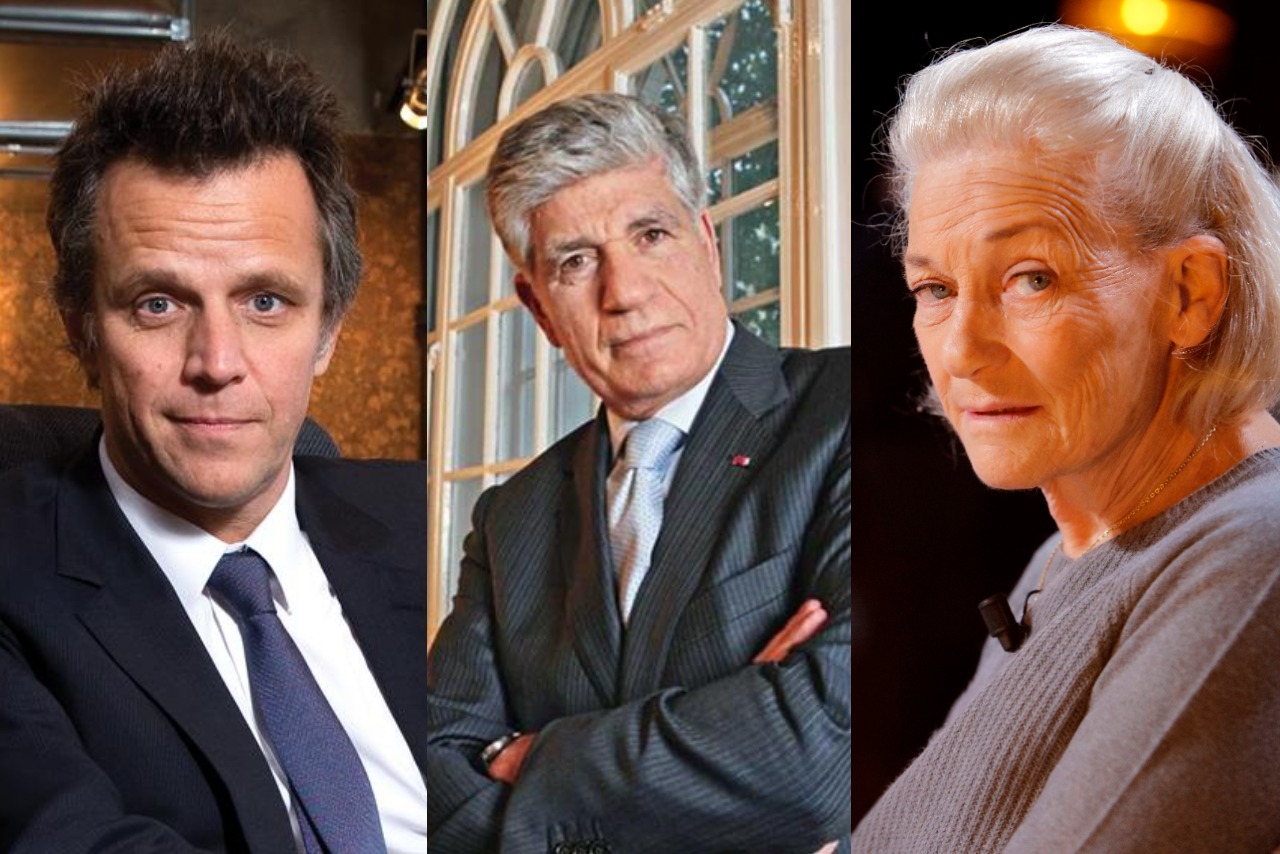 There is no sign that Publicis or its top shareholder, Elisabeth Badinter (pictured above, with Publicis chairman and CEO Arthur Sadoun (left) and Maurice Lévy), the daughter of the founder, Marcel Bleustein-Blanchet, who controls 12.85% of the voting rights, have been looking to sell.

Publicis is proud of its history, which dates back to 1926, although Maurice Lévy, chairman of the supervisory board, agreed to a merger with Omnicom in 2013 before aborting the deal in 2014.

In addition to Badinter, two younger members of the family sit on the supervisory board.

The family did reduce their holding in 2015 when Publicis bought some of their stock, equivalent to 1% of the company, at €73 ($89) a share.

A sector still in need of consolidation?

Agency groups continue to face challenges in modernizing their legacy operations because of major structural changes and low revenue growth.

Clients have cut agency fees and brought some marketing services in-house as they can buy direct from Google and Facebook, and new entrants such as Accenture, You & Mr Jones and S4 have emerged.

Martin Sorrell, executive chairman of S4 Capital, who previously ran WPP, and David Jones, founder of You & Mr Jones, who previously ran Havas, have spent the last few years criticizing at every opportunity what they say is the outdated agency holding company model.

WPP and Publicis have made some progress on internal restructuring in recent years.

Others, such as Dentsu, which said it would consolidate 150 agency brands in six global networks in December 2020, and Omnicom have been slower to change and suffered steeper revenue declines than peers last year.

PE investors are not the only potential buyers.

Vivendi, the French media conglomerate, which is controlled by the Bolloré Group and bought Havas in 2017, will have additional financial firepower after selling some of its shares in Universal Music Group.

Then there is Accenture and some of the other consulting groups, which have moved into digital marketing services by buying relatively small agencies, but have shown no appetite for large-scale M&A.

There could also be a wildcard such as Warren Buffett, founder of Berkshire Hathaway, who made a 925p-a-share approach for WPP in 2012 that was rebuffed.

Bankers are always running the rule over potential M&A deals.

“There is always a deal if the price is right,” the senior industry figure says. “Since 2013, for a few years, the price wasn’t right because the profit multiples went too high. When the sector multiple comes down from, say, 12 to seven, it then becomes cheap enough [for private equity] to take the risk.

“If you get the right price, you fix the existing business, then you deploy some capital to buy some high-growth businesses, suddenly you’ve got a business that isn’t worth seven times any more. It’s worth 12 times," the source adds.

That’s the theory. But it requires wary investors to commit their money.