Despite what many of my colleagues and close friends might think, I really am a man of simple pleasures, which it turns out is a huge advantage when it comes to being locked in your own home 23 hours a day, seven days a week.

I’ve learnt to further appreciate the humbling pleasures of opening the fridge every 10 minutes, walking the dog around the same park every day and when I really want to treat myself, watch West Brom lose every weekend... This continuing cycle of consistency has led me to consider changing my name to Phil Connors - Bill Murray’s trapped character in Groundhog Day.

Anyways, enough of me. Simply put, this return to simpler themes and activities in my day-to-day life has informed my choices for this week’s creative hits and misses:

I grew up with Nickelodeon; forever wanting to be Kenan & Kel’s third wheel or a cartoon version of myself alongside Mr Football Head himself, Hey Arnold. The slightly off-kilter kids channel represented all that was cool with America at the time and a kind of youth culture others seemed to miss.

This I suppose is exactly why the NFL decided on one of the weirder collaborations of recent times: partnering with the kids TV channel to broadcast the Saints-Bears playoff this past weekend.

As you’d expect, Nickelodeon really brought its own A game, with slime-like visual effects for touchdowns, alternative commentary featuring 15-year-old ‘analysts’ who were in fact Nickelodeon stars Gabrielle Nevaeh Green and Lex Lumpkin, plus a whole host of brilliant screen graphics that compared on-field players to some of the on-screen characters such as SpongBob and Patrick – or, as they called them, SpongeBob Sportspants.

Twitter was rightly ablaze with as many ‘WTFs’ as ‘well done NFL and Nickelodeon’, which is testament to the strategic gamble taken by both parties in an attempt to bring more kids into the sport. I for one am calling creative touchdown.

Marine AFC vs Tottenham: The romance of the FA Cup

From American to English football now, and a great campaign over this last week or so that perfectly encapsulates when ‘the beautiful game’ is exactly that.

Non-league, semi-professional Marine AFC sit 160 places below Spurs with a team made up of NHS workers, teachers and refuse collectors. For them, the upcoming game against Tottenham in the FA Cup not only marked the biggest game in their careers but also the most financially important game in the club’s history – well, it would have done had it not been for the c-word...

Getting creative, AFC Marine decided to set up ‘virtual ticketing’ for the match in an attempt to recoup some of the £100k they would have secured from the tie in more usual milieus; and boy, was it successful.

Some 30,697 people purchased a £10 ticket, including Jose Mourinho himself, with the likes of Gary Lineker and Ian Wright also getting behind the campaign as well as thousands of Spurs fans.

Tripling what they could have made, Marine’s much-commended approach seemed to give their social media team a bit of extra swagger in the final days before the big clash as they even managed to get in a subtle dig via Spurs' rivals, Arsenal, claiming they had the chance to sign Mesut Ozil for the FA Cup Clash.

Despite going on to lose 5-0, the quick thinking of Marine to secure such significant financial patronage leaves me thinking they should be considered for this week’s Creative ‘Man of the Match’.

Australian Lamb: When We Meat Again

Tasty in every sense of the word, the two minute-something ad is set in 2031, where the c-word seems to have left an indelible mark Down Under with physical walls now dividing states. But worry not, Lamb fans, as what unites us is more delicious than what divides us: the unmistakable waft of sizzling flesh.

What happens next is a comical feast for the senses as walls are smashed and charcoal smoked with the sweet scent of delicious meat and people coming back together for the first time in decades.

Yes it’s silly, yes it’s ridiculous; but quite frankly, in times like these, I think we could all do with a little smirk and a smile.

Since taking the decision to pack the booze in for a few weeks through January, the sweet, sweet nectar of red canned Coca-Cola has become my new weekend weapon of choice.

For many though, its sugary goodness doesn’t always represent the right choice; hence Coca-Cola consistently trying to find new ways to communicate its drinks dynasty. Most recently, this has come in the form of the ‘Open’ platform, which I thought in its first iteration, featuring the super talented George The Poet, was brilliant. It felt connected and relevant without being worthy.

However, in its newest guise, with cans and bottles becoming moments of empowerment through statements such “no more excuses: our idea is happening”, I can’t help but feel like it, ironically, falls a bit flat.

And despite calling on modern day superhero Marcus Rashford plus your more everyday celebs including Laura Whitemore and the Pritchard brothers, the thought of trying to rally the nation through a less-than-effervescent series of generic statements misses the mark for me.

We live in a world where we need action, not just words, and as such I would love to see something with a bit more substance and genuine follow through.

Nevertheless, I’ll be toasting its tasty beverages this weekend as I stare longingly out of the window waiting for the world to become a little more encouraging. 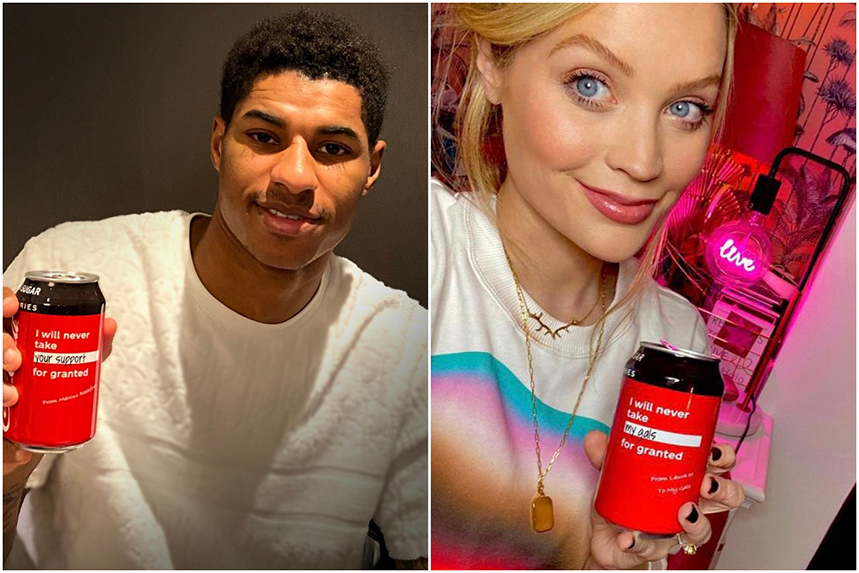