The extended Ten Campaigns We Liked in November contest was eventually won – with 45 per cent of the votes – by BeanOLD, a special adult’s edition of the Beano comic. It featured the likes of Captain Thomas Moore, Marcus Rashford and Dominic Cummings and was sent to 10 Downing Street in a campaign that secured more than 370 pieces of media coverage. Taylor Herring provided the PR support.

Second place went to Madame Tussauds, which brought its newsjacking A-game to mark the US election results. Donald Trump was playing golf when the decisive result came in, so Stripe Communications helped the museum quickly dress its waxwork Trump in golf kit – not an unfamiliar sight during his presidency.

See the full results below and find out more about the winning initiative: 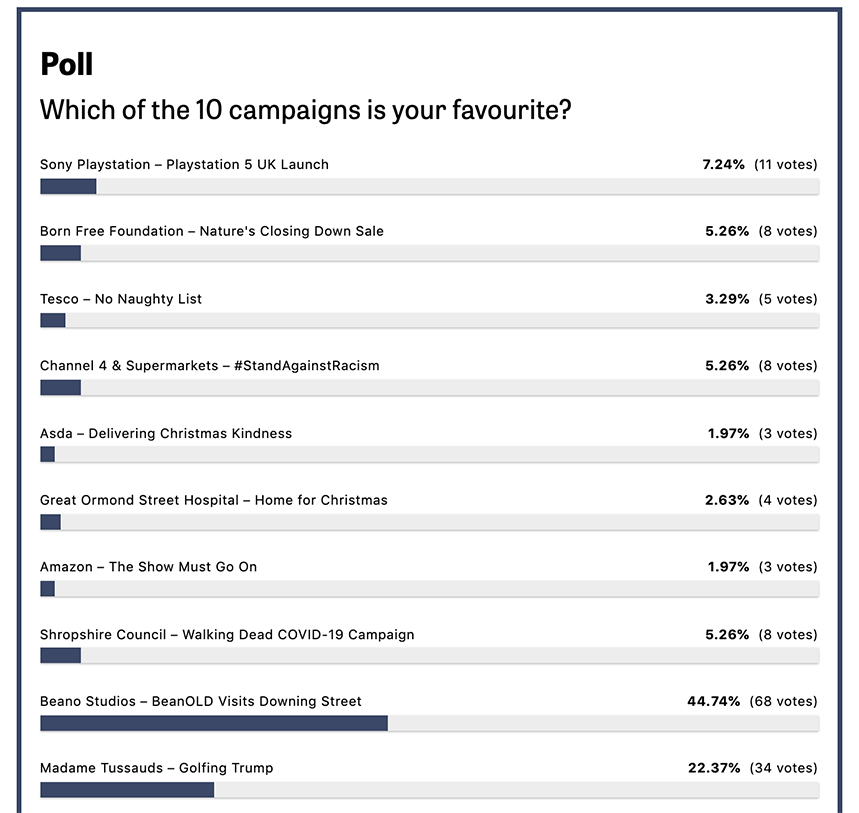 A special adult’s edition of the Beano comic was sent to Number 10 Downing Street with PR support by Taylor Herring.

Captain Sir Thomas Moore, Marcus Rashford and Dominic Cummings starred in the ‘BeanOld’ pullout, in a campaign that secured more than 370 pieces of media coverage.

This included mentions on BBC Radio 1, BBC Radio 2 and BBC Radio 5 Live, Channel 5 News, STV News, and BBC News. It also trended on Twitter on the day of the launch.

Beano Studios editorial director Mike Stirling said it is quite conceivable that Dominic Cummings nabbed the copy for his leaving goodie box.

In case you missed it: Five Campaigns We Liked in October: your winner revealed

Five Campaigns We Liked in October: your winner revealed