Home Depot’s 12-foot, viral superstar skeleton is hard not to notice, so of course other brands want to get in on the visibility.

Budweiser tweeted a picture of the gargantuan skeleton holding a massive bottle of beer with the caption, “This would be scary if he was holding a light beer.”

This would be scary if he was holding a light beer. pic.twitter.com/4JFS5fA06q

The skeleton is actually holding a 50-inch Budweiser Bottle Body Pillow, a spokesperson from the brand’s PR partner, Allison+Partners, said.

“Budweiser is adding some humor to this rising trend by treating this Halloween mainstay to a beer,” Allison+Partners said in an email. “Because, let’s face it, 2020 has been filled with way more tricks than treats.”

The PR firm is encouraging other consumers to buy the accessory for their giant skeletons.

We've got to admit, that was humerus.

Natural Light got in on the act by posting a picture of the skeleton holding a case of its own beer. 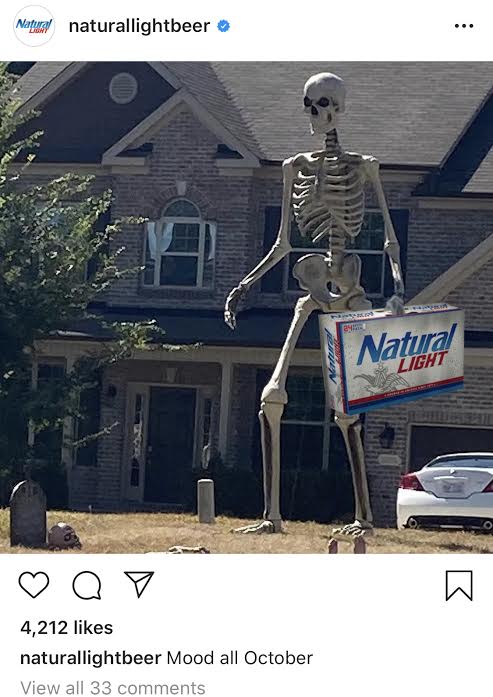 And Slim Jim, true to form, made a disturbing meme out of the skeleton on Instagram.

After going viral on Twitter and TikTok, the $300 Halloween decoration sold out online last month without any marketing backing from Home Depot. There is even a fan club for the skeleton on Facebook with 4,500 members.