The Co-op’s ‘mini crisis’ about boycotting The Spectator illustrates the risk in corporate brands expressing ‘gut reactions’ when engaging with consumers on social media.

An analysis of social and traditional media sentiment found that although the issue caused short-term reputational pain, it did not blow up into a major crisis.

Earlier this month, prominent broadcaster and chair of the company that owns The Spectator, Andrew Neil, tweeted that the Co-op was no longer welcome to advertise with the magazine in a row about transgender rights and editorial freedom.

On 4 September, a user complained about the Co-op advertising in The Spectator, arguing the magazine frequently ran content that was anti-trans.

In response, the Co-op said it would boycott the magazine – a move that led to Neil telling the group it was no longer welcome.

A day later the Co-op appeared to perform a U-turn and said the tweet had been sent incorrectly, but not before causing limited damage.

That’s escalated quickly and we want to set the record straight. The tweet sent yesterday was incorrect and does not reflect our advertising position. Our policy supports editorial freedom and you can read more about it here: https://t.co/HgTFCKTxec ^Fi

Analysis by Commetric found the ‘mini crisis’ lasted for a few days on Twitter, with “only a very limited number of users suggesting a more radical consumer action such as a boycott”.

"Our analysis of the Twitter storm demonstrates the Co-op  lost control of its message fast because it underestimated the power and reach of Andrew Neil and his influential followers, who proved much more adept at mobilising  supporters.  It's a stark warning of the need to ensure your actions match your brand purpose."

Between 30 Aug and 10 September, there were 58,300 mentions of the controversy on Twitter, with most occurring on 4 September. After the initial peak, the conversation faded away by 7 September.

The analysis, shared exclusively with PRWeek, found many Twitter users had framed the issue as a matter of free speech versus ideological corporate 'wokeness', and more sided with Andrew Neil’s position accusing the Co-op of virtue signalling.

As a result, a large number of Twitter users portrayed Co-op as being part of the far left, silencing dissenting views and impeding editorial freedom. 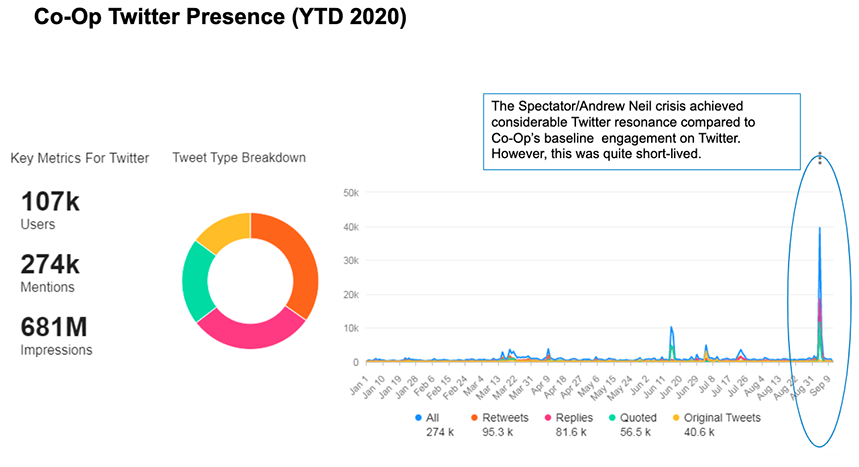 The analysis added: “Co-op’s communications seemed unco-ordinated when it tweeted that its earlier statement on ceasing its relationship with The Spectator was incorrect and 'does not reflect our advertising position'.”

Neil was driving the whole debate,and posting almost 30 tweets, with his first on the subject reaching one million people and generating 31.4m impressions. 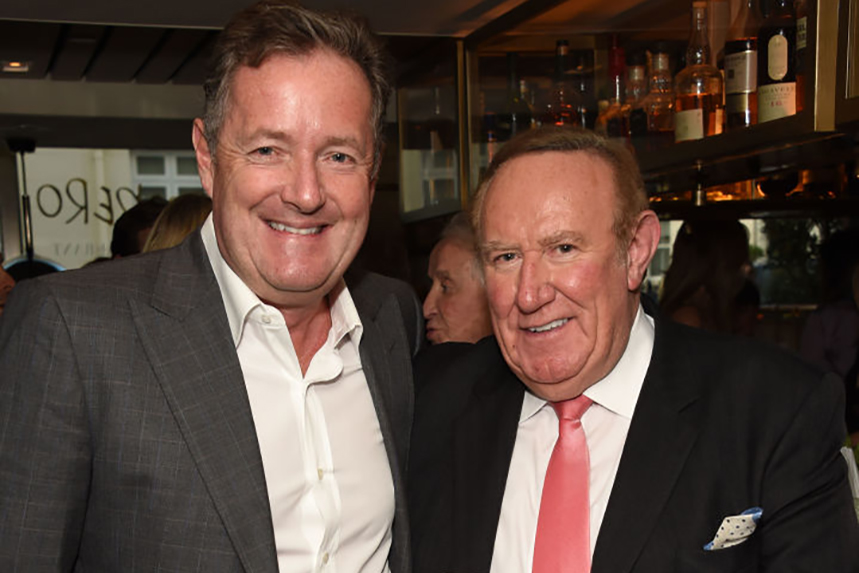 Piers Morgan and Andrew Neil had the largest Twitter reach in the posts about Co-op (Photo: Getty Images)

The controversy had limited traction in traditional media, with only 36 English-language articles, including several right-wing outlets such as Breitbart, Russia Today and Sputnik. The top-trending article on social media was The Spectator’s ‘The Co-op needs to explain itself’, which called Stop Funding Hate “a bunch of self-righteous zealots attempting to shame the Co-op”.

Other top-trending pieces endorsed Neil’s decision. Russia Today presented the story as “outraged activists push a company into withdrawing ads from media they disagree with”, while Reclaim the Net, an outlet whose mission is to “defend free speech and individual liberty online”, wrote that “Andrew Neil shows people how to stand up to mob tactics”.

The Commetric analysis concludes: “Even though Co-op seems to have dodged a bullet for now, a social media crisis could be lurking around the corner if the group isn’t careful in its overall communications approach.

“The controversy should serve as a valuable lesson for brands as a whole on the importance of being extra meticulous in demonstrating brand purpose and executing value-based marketing communications campaigns.”