When did you decide to close the office and as CEO did you leave at the same time?
We decided to close on March 12. The week before, we told people on a voluntary basis if they were uncomfortable being in the office, they could not come in. Then, on March 12, we decided it was mandatory. Everybody, globally, needed to work from home. I was there until we issued the order for sure. [Andy Polansky, chairman and CEO of IPG Constituency Management Group] and I walked out together that night.

Where is your home office?
I'm in New York City, in downtown Manhattan. I was there from the day we left the office. And I probably didn't leave Manhattan until around Memorial Day. Frankly, I didn't leave my apartment for the first six weeks. I went to the garbage chute. I think that was my longest trip for, give or take, five weeks.

Normally you’re travelling a lot for work. Now you’re forced to be in one place. Was that a big adjustment?
Yeah, it was. Lots of virtual meetings. Lots of discussions and lots of decisions, and every decision was really important to a person or an office or a group of people or to a client and to the employees of that client.

So in the first six weeks of the pandemic, it was hard. Often, in the course of a business day, you have meetings and you walk down the hall and you go get a latte and you chit chat, and those are good things. But it became very, very nonstop with a high level of gravitas in every single conversation, just because of the nature of what was going on at the time. 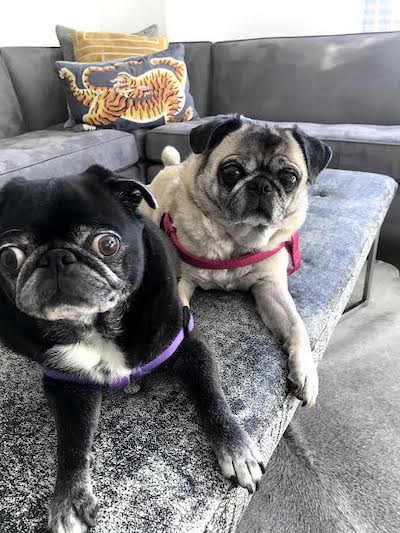 Who do you share your home office with?
My husband and I have daughters. Both of them live [separately] in New York City, so we were quarantined on our own with our two pugs, Lilah and Rosie. Everyone talks about how happy the dogs are and this [pandemic] is fantastic for dogs. I think they thought it was fantastic, but they also seemed to be thinking, ‘What are you people doing here? This is where I sit on the couch.’

So for a long time you didn’t go anywhere?
No, I didn't. I didn't go out. Because we're global, sometimes calls would start quite early. And those would go until 7 a.m., sometimes later. And then I would cook. That's my release. My husband also cooks, but for me it was a little bit of a tension release.

What were you cooking?
There's the restaurant on the Upper West Side with a chef that has a way of cooking cauliflower. You have to parboil the cauliflower for a certain time, dry it off and then you roast it. It's easy, yet hard to perfect. So I was able to get a lot of cauliflower early in the pandemic and I've really perfected this dish. I cook all kinds of stuff, but mostly vegetable-forward food. I did a lot of that.

When did you first venture out of the apartment and where to?
We ventured out on Mother's Day. We went for a walk down to Battery Park. That was probably the first time I walked outside at any great length.

My dad is 91 and he lives in Connecticut. So eventually, after those first five or six weeks, I got myself to a place where I felt that I'd been well isolated. And I do help take care of him. So I started going up to Connecticut to see him. I followed all the COVID-19 rules about not getting too close. But he was getting very, very isolated and asked many times for me to go.

How do you feel about working from home?
I don't have a home office. I feel like I've always done the best work of my life seated on the couch with my laptop on my lap and the dogs on either side of me. And that was the approach throughout quarantine.

I did a lot of town halls early on and throughout the pandemic. And I labored about where to do these things from. First, I positioned the laptop on the top of a couch and sat on the floor and the dogs walked through from time to time.

Is it easier for people to book time with you now that you meet people virtually?
For sure. It's really a benefit for me, right? I could be brought into more client discussions into more team discussions into more pitches. I can't say there's not a downside to not being in a [real] room with the electricity that happens there. I think that’s important to the idea part of the business and it's important to growing people and giving people experience. And then there’s just the adrenaline rush that happens in a [real] room.

But we're finding there is a new kind of adrenaline rush. And also there is the democratization of everything that happens when you're looking at six squares on your screen, and every one of those six squares is talking and sharing something. Their voices are equal to mine, and to other senior people.

You said the first couple of months felt intense. When did that change?
Around the beginning of summer. We're a global system, so some of our offices were beginning to open. Our clients were beginning to talk to us about a little more normalized pace of work. And there were conversations that weren't necessarily about COVID-19.

We've been going through a collision of crises. I mean, COVID-19 and then Black Lives Matter, racial injustice, structural inequity, all of those things, which brought a wave of real concern. That was certainly a period of great focus and great analysis playing out during the same time.

The intensity has continued. But it's a little different and I don't know if maybe that’s the weather, because it's summer.

What are the plans for Weber Shandwick right now?
In many parts of the world we are open, but not at full capacity and following the local protocols and public health advisories. In the U.S., we will not reopen until January. Particularly in bigger cities, there's anxiety around public transportation and a lack of clarity around school and school systems.

When are you personally planning to start travelling for work again?
We'll start looking at that as it makes sense to visit with clients. I don't think we'll start immediately, but by mid-fall. Right now, I have nothing booked.

What did you learn from this whole experience?
There's an old George Carlin routine where he talked about the difference between people and animals. Animals have no stuff. They wander around and are happy. But people spend their entire lives collecting stuff, buying stuff and schlepping their stuff around.

So I decided a few years ago to make an attempt to remove a lot of stuff. But in a pandemic scenario where one cannot go outside for six weeks, stuff takes on a renewed importance. That was probably the key learning, should we be looking at another scenario.

Like maybe we should hoard a little bit of some stuff, so one doesn't have to live off cauliflower alone. Literally, we had nothing in the freezer. In fact, I had great joy opening the freezer and seeing nothing in it. But then it became clear that we had to actually get some stuff.