As football returned to Scotland, Paddy Power filled a stand at Motherwell FC with fan cut-outs – but not those you’ll have seen across Europe. Instead of showing images of cheering supporters, these cut-outs are completely blank.

The 1,190 ‘silhouette supporters’ are to raise awareness of the charity Missing People, and the thousands of people who go missing across the country each year. They will remain in place until fans return to stadia.

It came from the ‘new normal’ of football – with every club under the sun installing fan cut-outs, and some trying to do different things with that format.

It was something we had been chatting about for a while, but hadn’t quite nailed, until a lightbulb moment happened one day, and it was suddenly full speed ahead.

No, we had initially wanted every cut-out to feature an image of a missing person, but we moved away from that for two reasons. First, logistically, it would’ve been very difficult for the charity to collate them all for us; second, we decided it wouldn’t look any different to all the other cut-out displays. So needed a more creative image to launch with.

The ideation and execution was done internally – with the support of Motherwell, who we worked with last season on the Save Our Shirt campaign.

We only had the idea a couple of weeks out from the match, so had to move quite quickly – not least because of production and print deadlines.

Thankfully, Motherwell and Missing People were both flexible enough to turn it around in time.

The timing, as mentioned, was one – and then working out the tone and positioning of the campaign.

Clearly, it’s slightly different to Paddy Power’s usual marketing – it isn’t humorous, for instance. However, we felt it still felt authentic coming from us, just that it leaned more into other brand pillars, such as ‘sharp-witted’ and ‘on the punters’s side’.

Also, personally, I kind of figured: “Why wouldn’t we do it?”

After all, the majority of our followers and customers are young men – which is the exact demographic that is most likely to go missing. And, as a result of COVID-19 and lockdown, more people than ever before are at risk.

That aside, the other hurdle was getting posters designed and printed for our shop windows – featuring missing people in the area they were last seen – but our suppliers have become used to pulling rabbits out of hats for us. 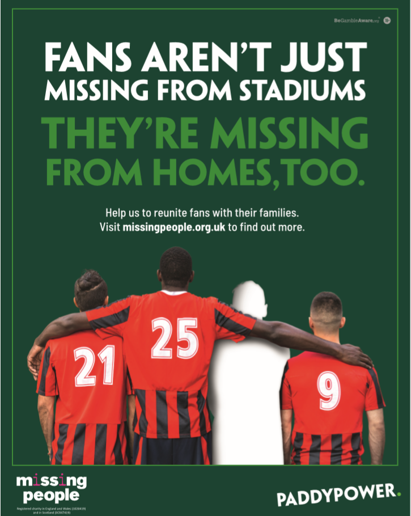 Similar to usual, albeit with the caveat of knowing that it was a big departure from our usual social content, so tempering expectations on that front.

So: quantity and quality of coverage, social numbers, general sentiment, and the number of recruiters who add me on LinkedIn in the aftermath.

That it’s OK to pivot, you don’t always have to do the same thing. And that, sometimes, people like it when brands do 'A Good Thing'.

Mostly, though, I learnt about missing people as an issue. Some of the feedback and stories we heard from families that the charity works with were heartbreaking, as you can imagine.

For them, anything that potentially improves the chances of finding their loved one means a huge amount, so I really hope this campaign can make a difference.