Doubts have emerged about the Government’s claim that its decision to impose a blanket mandatory quarantine policy in June was based on “the latest scientific evidence”, a PRWeek investigation has found.

On the 22 May, Home Secretary Priti Patel revealed the UK would impose a mandatory 14-day quarantine for international travellers entering the country from 8 June. At the time, it was estimated the policy could cost the economy £650m a week.

She said the decision was based on “following the science and introducing public health measures that are supported by SAGE”.

PRWeek has since learned that the body had not advised the Government to impose a quarantine and its most recent advice had been delivered on 28 April.

In response to a Freedom of Information request, the Government told PRWeek SAGE had provided it with advice on border measures in relation to the COVID-19 pandemic “a number of times from January to March”.

Home Office Science told PRWeek: “After the SAGE meeting on 28 April, SAGE provided no further advice or evidence to help the Government form its mandatory 14-day self-isolation policy for travellers into the UK, which came into effect on 8 June.

“Instead, scientific advice to help form the policy was developed departmentally by the Department for Health and Social Care and by the Home Office.”

The Home Office would not provide PRWeek with further details about the specific scientific advice it had received from the Department for Health and Social Care. A Government spokesperson said: “Our approach to tackling coronavirus is, and has always been, guided by the latest scientific and medical advice, and procedures at the border have been strictly following the latest Government guidance throughout.

“The scientific advice was clear that coronavirus cases entering the UK from abroad matter most when the UK has a low level of infection. Therefore, as the virus was brought under control here, border measures were introduced on 8 June to protect public health and avoid a second peak of this deadly virus.”

A few weeks after introducing the policy, the Government revised a blanket approach by announcing air bridges to countries that it deemed safe to travel to. This followed substantial political and public pressure, including an effective tourism, travel and hospitality industry campaign, 'Quash Quarantine', co-ordinated by The PC Agency’s Paul Charles (see image below).

Trust in the Government's public health messaging has been tested as the pandemic has endured, particularly following its defence of Dominic Cummings for breaching lockdown rules in late March and early April. 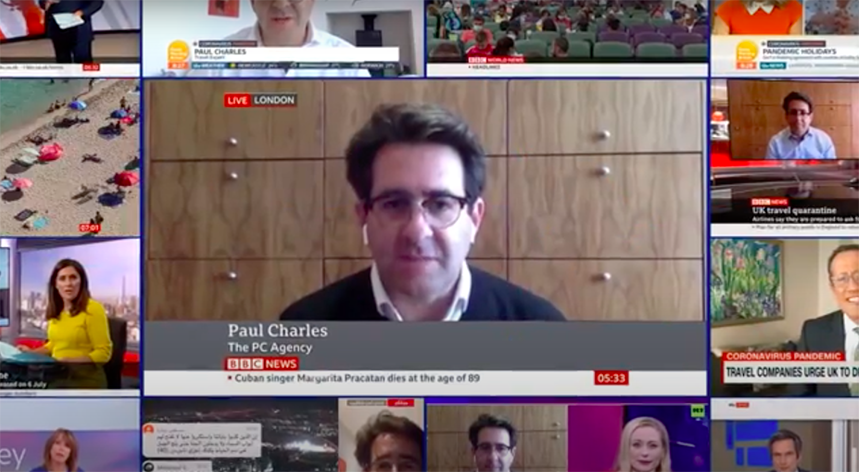 “It was the shortest Government policy that ever lived – it was dropped after three-and-a-half weeks,” he said. “I think this is an indication that the true story and the full picture was not given, as we suspected, at the time the policy decision was introduced.

“I don't think the Government ever had a truly convincing rationale for introducing this policy. We always knew it was the policy of Dominic Cummings… and most people connected with Westminster will tell you there was never any rational debate or opportunity for anyone to stop this policy coming in. It’s an indication of how powerful some people are in Westminster.”

Charles speculated that the motivation to impose a blanket quarantine policy could have been based on polling at the time that indicated Brits did not want the coronavirus brought back into the country from high-risk areas such as China. The Government has previously denied claims the policy was determined solely by Cummings.

Charles believes the introduction of the blanket quarantine policy was a “political decision”.

“The science was very useful to the Government early on in the coronavirus, but now they’ve learnt a lot more, the Government has clearly moved on from just listening to science and moved into the political arena,” he said. “I think the phrase ‘following the science’ could be replaced with ‘following our political beliefs’, which would be more appropriate.”

Charles also believes this Government is making decisions more rapidly than it was at the start of the pandemic, which may lead to policymakers misunderstanding public sentiment.

“For communicators within Government, there needs to be more detail on the decisions that are taken. In this quest to be seen to be moving quickly, it is sometimes dropping the ball on very important decisions,” he said.

“The thing about the blanket quarantine policy back in June was it was never voted upon, and never put to the people. It was a highly significant piece of legislation, and secondary legislation should be voted upon.”