To mark its 135th anniversary, Southampton FC launched its '20/'21 kit in an arcade-style video game called ‘Defying the odds since 1885’.

The game, which features hidden Easter eggs such as cult heroes like Ali Dia and obstacles such as Portsmouth players to avoid, takes players through the club’s history and, once each level is complete, a different part of the kit is unlocked.

Prizes are also available to be won via a live leaderboard.

The campaign was activated in partnership with Unit9, which created the game, and Engine Mischief, which managed the amplification of the campaign via PR and influencer marketing. 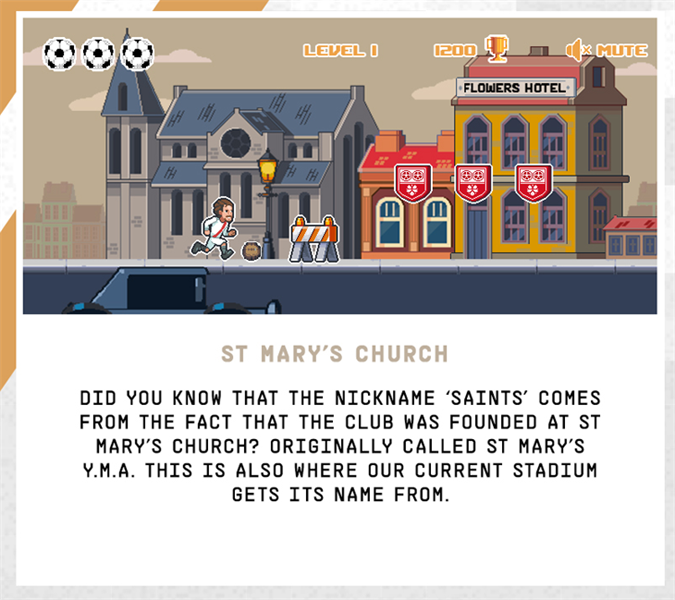 Each year, we aim to deliver an innovative campaign for our kit launch – something that people wouldn’t expect from a football club, both to engage our loyal support base as well as to convert new fans from the general public. Usually players have a big role in this; however, this year’s unprecedented times with COVID-19 meant that player access was not possible.

As the '20/'21 season is the club’s 135th anniversary, we wanted to ensure we could tell the brand story through the associated kit launch.

As we commenced planning, news stories began emerging, reporting that Brits en masse were taking up mobile gaming as a way to curb lockdown boredom. This insight and trend sparked a creative lightbulb for us – a retro arcade-style mobile game would be perfect for reaching our fans by telling our brand story in a unique, engaging and entertaining manner.

To add to that, delivering a campaign with gaming at the heart of it felt like the right way to connect with the wider footballing community, as we know there is such a large correlation between football fans and the passion point of gaming – you only need to look at the vast following of [the] FIFA [game series] to see that clearly.

The biggest challenge was delivering the game within the remote working circumstances we found ourselves in. Developing something like a mobile video game takes a great deal of collaboration, creativity and revision, so team and game-developer communication is key.

Not being able to do this in person made it more challenging than the process would normally be, but we worked with a brilliant partner in Unit 9, so were able to make it work and we are delighted with the end result.

Primary measures of success for the game were unique user game plays, total number of gameplay days and clickthrough to the retail store. We’re pleased to say that we exceeded our KPIs in all these areas:

We learnt that you can still be ambitious and create great work without being in the office. It’s certainly been challenging, but to create such a great campaign, with so many people involved, without having any face-to-face meetings, demonstrates how flexible and adaptable we can be without having to sacrifice creativity.