M&S Food’s Little Garden, a new in-store collectable scheme, where shoppers received a little seedling pot with every £20 spent. There were 12 to collect in total, including basil, beetroot, carrot and lettuce. The aim was to drive sales, while teaching kids a little bit more about where food comes from.

The brief was to create fame, encourage shoppers to keep going in-store and position M&S Food as an educational shopping destination. Our remit was among influencers, so we worked with parenting influencers to drum up excitement and encourage their followers to join them on their seedling-growing journey.

We also discovered Lee Connelly, aka The Skinny Jean Gardener, whom we brought on board as an ambassador, to lend his horticultural expertise to the Little Garden microsite. 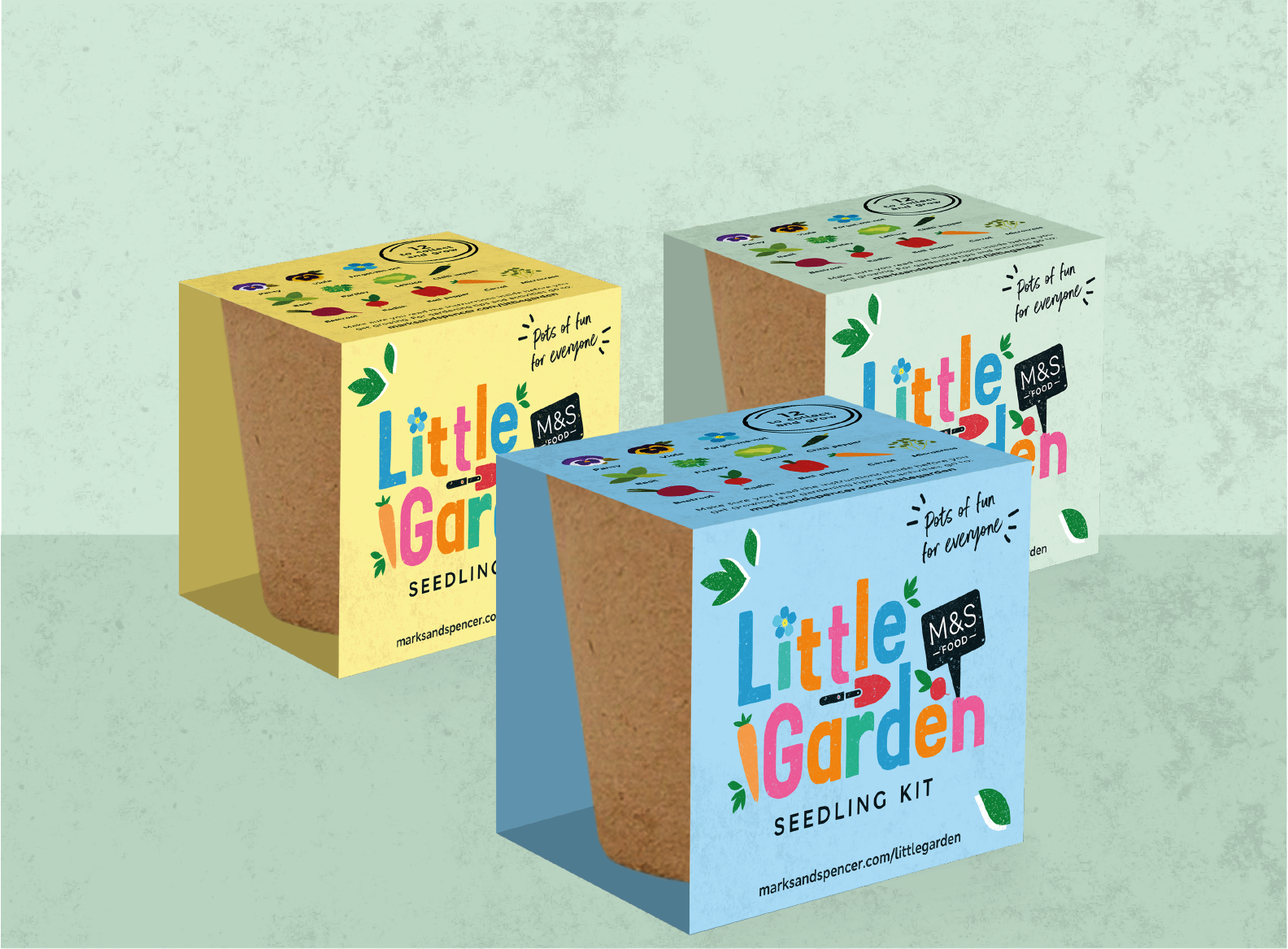 Back in summer 2019, we launched M&S Food’s Little Shop, so we’d learned which influencers worked best with our audience. We’d discovered this not to be the famous “macro” influencers that many of us know so well. It was the incredibly engaging mid and base tiers who were making a real impact among their loyal followers. Using a 'pyramid' approach, we delivered a high volume of creative content through our base tier, while our mid tier achieved scale and increased buzz. We contracted more than 20 UK-wide parenting influencers to create their own content, and it was key that their posts were both visual and engaging.

We also felt that we needed an extra level of interaction to help get the nation more green-fingered, because, for many, growing herbs and vegetables wasn’t an easy task. We needed someone to make Little Garden as user-friendly as possible and as soon as we discovered Lee, we knew he was an ideal fit. With his own gardening podcast, experience on Blue Peter and a new children’s gardening book, Lee was the perfect pick to connect with families. He was also about to embark on a tour of the UK’s schools, to get kids into gardening, which we arranged for M&S to sponsor. It couldn’t have been more perfect.

Lockdown happened. Fortunately, the schools closed the week after Lee’s school tour. We now had families stuck at home and unable to go in store, albeit with more time to get stuck into growing their Little Garden kits with their children.

Overnight there seemed to be a plethora of online classes and virtual hangouts popping up, so we had to act quickly. We enlisted Lee to develop family-friendly content to keep consumers entertained (while gardening). For six weeks, Lee took over M&S’ socials with a new gardening video series: “Lee’s Garden Get-Together”. These were quick and easy-to-follow lessons on how to get growing your own plants, fruit and veg from home, while “Lee’s Super Saturday Quiz!” was intended to get families together for some lighthearted, gardening-themed fun.

The content was amplified by a media relations campaign that focused on interviews with Lee, press features across national and regional media and additional influencer content from our Little Garden Community.

Twenty influencers were brought on, with 250-plus pieces of content created, 2.2 million impressions, 3,500 comments across posts and 100 per cent positive sentiment tracked. Influencers’ combined following was 1.2 million and a higher-than-average engagement rate and open rate was achieved. The CTR KPI through swipe-ups was also achieved. 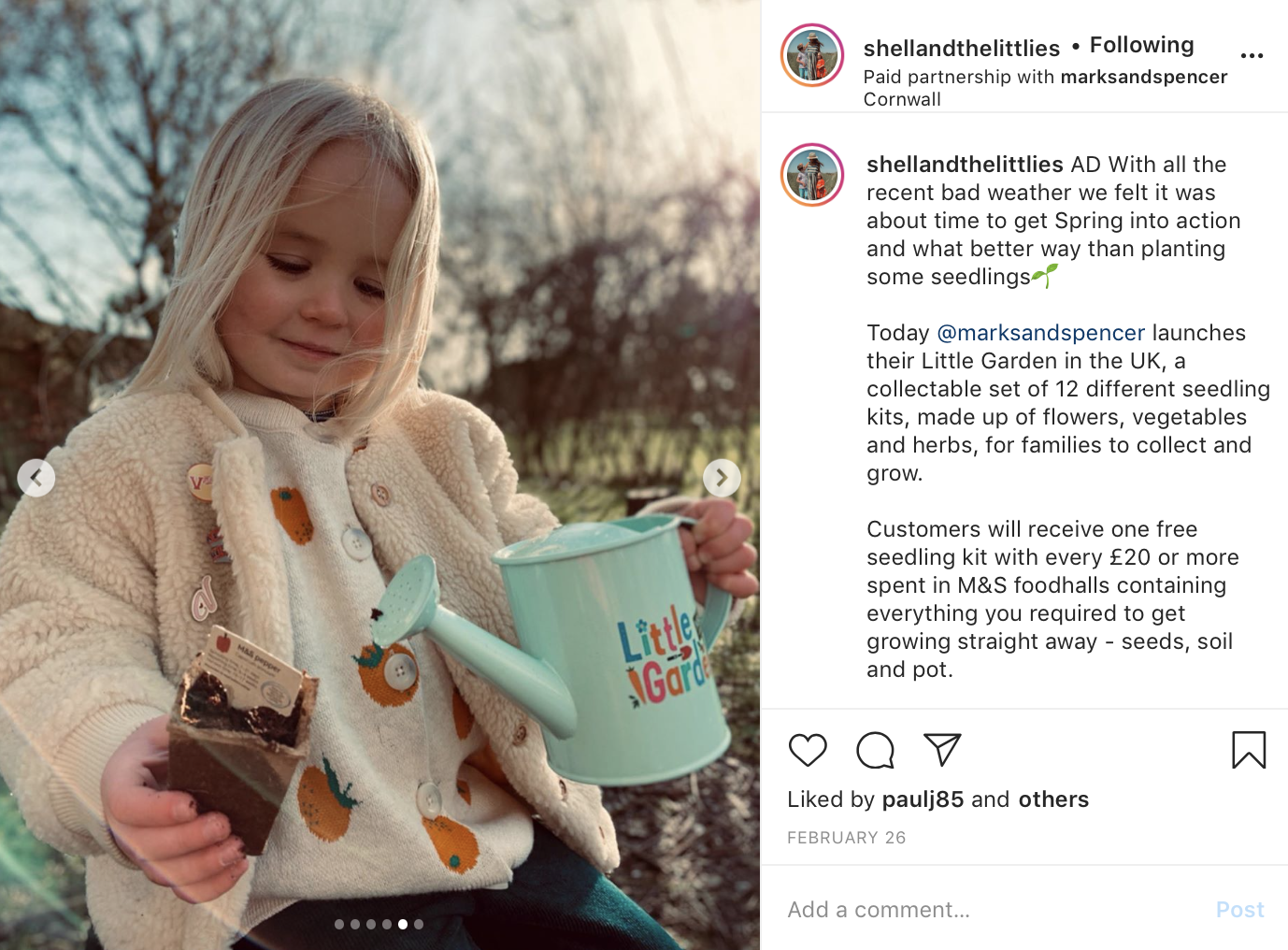 More than 10,000 children were reached through Lee’s school tour and Facebook Live. The total reach of campaign through influencers, Lee’s channels, press coverage and school tour was 13.7 million. There were nearly 500,000 web hits and 10 million seedling kits given out.

The importance of acting quickly, flexibly and liaising very closely with your client. Luckily, we have a very collaborative relationship with both our client and our influencers, so were able to get plans off the ground fast, while remaining clear on messaging and ways of working.