There are positive signs that trading conditions are slowly recovering for the industry after months of record low levels of activity in recruitment and new business opportunities.

This coupled with some agencies starting to return to office-based work indicates that at least parts of the industry have entered a recovery phase.

Read next: Two-thirds of brands not confident in running fully remote pitch process

Recruitment is one area that has suffered badly during the pandemic, as a sizable proportion of the industry was placed on furlough and recruitment freezes took hold.

More recently, some agencies – particularly bigger networks such as Edelman – have been forced to make redundancies, and in extreme cases businesses have closed.

Two months ago, f1 Recruitment founder and chief executive Amanda Fone told PRWeek the jobs market had been “cut off at the knees”, with recruitment activity down to only one-fifth of normal levels.

Today she says there are more conversations happening about recruitment, particularly among smaller businesses, and there is a much healthier pool of talent to choose from than prior to the pandemic.

“I would say there is probably twice to 2.5 times the talent now than there was in March,” Fone told PRWeek.

“There’s much more supply than demand, but where there is demand it is coming from smaller, privately-owned agencies. It’s definitely not from the bigger agencies that are from the large marketing holding groups.

“We have quite a lot of people out on open interviews where clients are interested in finding talent and are having general conversations with candidates. That definitely wasn't happening in May or April.”

Fone said that corporate comms, corporate reputation and public affairs roles have remained in solid demand, while consumer PR roles are harder to come by.

Content, digital and social skills – across all levels – are in demand, as well as talent with business development skills.

“Agencies need rainmakers – people who can go out and bring in new business, or at least [are] able to have conversations with organisations about when clients might be thinking about changing communications suppliers,” Fone added.

Fone added the caveat that it is still too early to suggest the recent uplift in activity is part of a broader trend, because many businesses still need to return employees from furlough and some may yet have to let staff go.

The call for business development skills could relate to a recent uptick in new business opportunities.

PRWeek understands that in the past couple of weeks, there has been a flurry of pitching activity as brands that had previously hit pause on marketing spend are freeing up budgets.

“I've certainly found in the past three weeks that clients are coming out of hibernation in quite a big way. A fair few have said they’ve got marketing budgets they need to spend by the financial year end or they will just lose it,” he said.

“We’ve seen a huge flurry of pitches, actually significantly more briefs compared to this time last year that have just landed for mid-to-late summer, which will hopefully be good for the industry as a whole."

Herring has noted a big demand for an integrated response that provides creative ideas which work across editorial, social-media channels and influencers.

“Marketing departments see PR as providing an agile and affordable fix to getting the message out there that it’s business as usual while getting one over on the competition while they’re still slumbering,” he said. 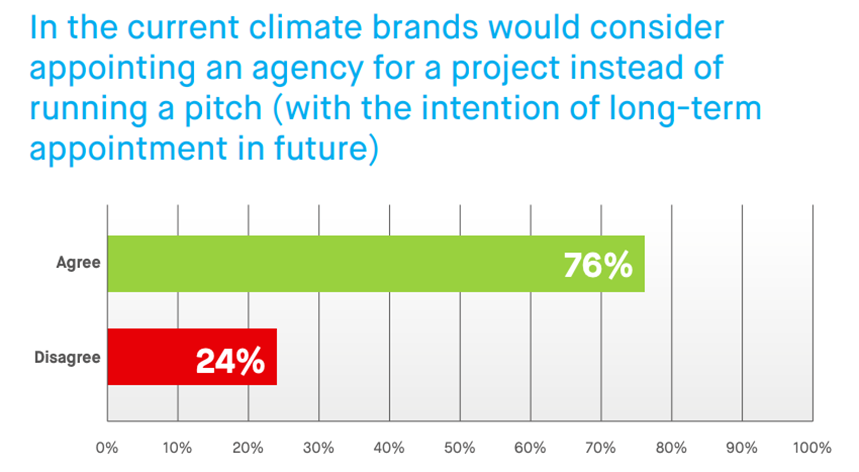 Creativebrief, which helps clients manage the agency selection process, said it is seeing early signs of an uplift, but the market remains flatter than it traditionally would be at this time of the year.

“We wouldn’t be rash enough to imply that we’re entering a genuine bounce-back phase just yet, but we have begun to see an uplift in preparation, discussion and planning on the part of brands during this period – and a sense that where budgets were halted or reigned in for Q2, there’s a desire to release these again as we enter Q3,” Creativebrief chief executive Charlie Carpenter told PRWeek.

New research by Creativebrief, which surveyed 50 brands in the UK, including Centrica, Ikea, John Lewis & Partners and Virgin, found that 76 per cent are using this period to step back and think strategically about the future.

About half of the brands surveyed think now is a good time for a review, and three-quarters would consider appointing an agency for a project with a view to a longer-term arrangement, rather than going through a pitch process.

Guinness Europe head of brand Neil McKee added: “[It] should just be a way of working moving forward versus specifically for this period.”

Creativebrief said it does not expect a “torrent of agency reviews” in the next few weeks, but for “this to lead to a notably more solid market of opportunity for agencies in the next six to 12 months”.

Although it is far from a return to pre-coronavirus times, these findings are positive signs that trading conditions are improving.

From the editor-in-chief: return of sport an emotional boost, but firms eyeing 50 per cent revenue drops and job cuts