The research, which tracks the careers of 17 BAME PR professionals, highlights cases of racism, microaggressions and unconscious biases they have regularly faced, while having to work in an inflexible culture that denies them opportunities and fair progression.

An alarming conclusion of the study is that individuals eventually set up their own shop to continue a career in PR – or leave the industry altogether.

The research highlights a worrying set of common experiences. These include BAME practitioners being afraid to make mistakes; not being comfortable to act as themselves; having to work harder for fewer opportunities; and everyday casual racism.

Talent is judged to a different standard to that of white colleagues, and there is a lack of support when they speak up.

“The PR industry agrees that diversity is important for attracting the best talent to bring fresh thinking, creativity and insights into new audiences, but our actions speak louder than our words,” she said. “And our actions are building a profession of white private-school alumni; we are less diverse than we’ve been for the past five years.”

An often overlooked problem is that practices within the workplace are damaging the industry’s ability to retain talent after they rise through junior ranks. Many leave to become independent practitioners, which BAME talent regards as a solution to challenges in the workplace and an opportunity to channel a common entrepreneurial spirit within BAME communities.

This move to independent working may be viewed as a success for some individuals, but represents a loss to the PR industry as it further reduces diversity and role models among senior ranks within existing firms, perpetuating a cycle that reinforces shockingly low BAME representation among leadership of the largest PR consultancies.

It’s not that there is a lack of will or love for the profession, as the majority of BAME PR professionals recommend the industry. 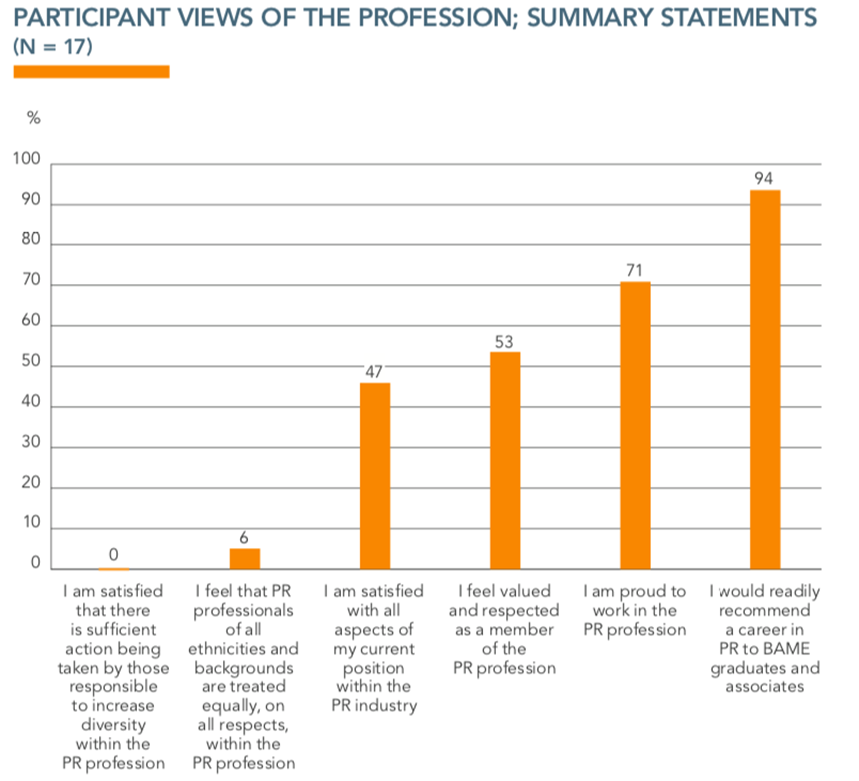 Today, BME PR Pros founder Elizabeth Bananuka launched a new Blueprint initiative to provide a kitemark and guidance to agencies to get their houses in order. This report highlights that a lot of work is needed.

PRWeek has summarised some of the key forms of day-to-day discrimination that BAME practitioners reveal in the CIPR’s ‘Race in the PR Workplace: BAME lived experiences in the UK PR industry’ report.

The report found that racism is a significant factor having an impact on the working lives of BAME professionals and these often take the form of microaggressions, which build up over time and negatively affect individuals subjected to them.

Some felt that the quality of their work was under constant scrutiny, and they didn’t feel trusted to do the job because they were different from their white, middle-class colleagues and the associated elite culture within the industry.

This treatment reflected the “institutional racism” BAME practitioners felt as if their work wasn’t valued in the same way.

Microaggressions are subtle, indirect and possibly unintentional, which makes them difficult to address through policies and procedures.

In one instance, a BAME practitioner was subject to inappropriate comments about her hair, but felt uncomfortable and unable to address this because she feared falling “into the stereotype of Black African people being aggressive”.

Here are some lived experiences from BAME practitioners:

“I feel there is a real misunderstanding of what racism is. It’s politically incorrect now to be overtly racist so it is repressed in people and they divert the conversation. You can’t invalidate someone’s experience just because you can’t relate to it. They say: ‘Oh, they’re always playing the race card and victimising themselves, they’re just lazy.’ Some people say racism doesn’t exist. If you can’t have a conversation about it, we can’t get anywhere. It’s important to acknowledge and embrace our differences; do not suppress them. Make people feel welcome.”

“My life in that organisation would have been so much easier if I had just never said anything about diversity. Just not raised my head above the parapet and made myself stand out. They just think you’re trouble. I realised that they thought I was the problem.”

“When I was at a small PR agency, I directly experienced racism from a client. All my work was signed off by a more senior staff member within the agency and by the client lead. There was never any question that my work was not good quality, but this specific client kept rejecting it. In the end, my boss at the agency called a meeting with me and the Client Director and said that they had reviewed all my work and they could see no other reason for this client’s complaints other than he was being racist. My boss then went on to say that whilst they wanted to drop the client, they couldn’t afford to and therefore could I continue to work on the account, but that they would attend all the meetings in my place. Ultimately, I didn’t feel that they had my back and so I left shortly after this.” 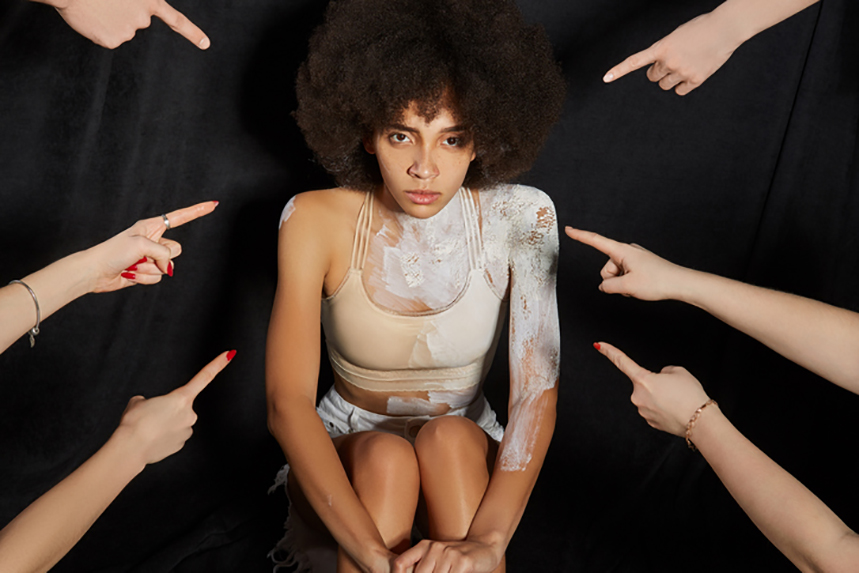 BAME professionals do not feel like they can be themselves at work and are under pressure to conform to a certain 'white culture' mould.

The PR industry maintains existing cultural norms and fails to encourage more diverse thinking. BAME professionals said they need to fit into a certain mould to progress, conforming to a “monoculture of white, middle-/upper-class privilege”.

They are made to feel they don’t belong, from having different backgrounds and experiences growing up, to having to “say the right things or speak the right way”, to their physical appearance.

There is a pressure to act and behave how they thought a “white British person would”.

There appears to be a correlation between one’s socio-economic background and individuals’ work experiences and career prospects. Some respondents expressed the importance of parents’ “social circles” and the “favours game” that came with it. A successful career in PR is deemed to be about “who you know, not what you know”.

“I was constantly having to prove my commitment and skills above and beyond others, to prove I was good enough. I always took the emergency phone home at Christmas, stayed late at work and was always willing to go the extra mile.”

“Even when I got headhunted for the next job in a consultancy, I still felt like an imposter, even more so. They were even more prestigious than my previous agency. Everyone’s parents had such prestigious jobs; it was overwhelming. I think the bigger problem for PR is keeping BAME people in the industry. Even if they get better at attracting BAME people into PR, they will still feel like an outsider, that they are not good enough to be there, then they won’t stay there, because they’ll find the culture hasn’t actually changed at all.”

“Agencies would never take me on, full stop. I think that is a bias, not just colour but a certain ‘type’ of person. I didn’t fit that type and didn’t look like them. At senior levels, it’s all men, so that’s me out too.” 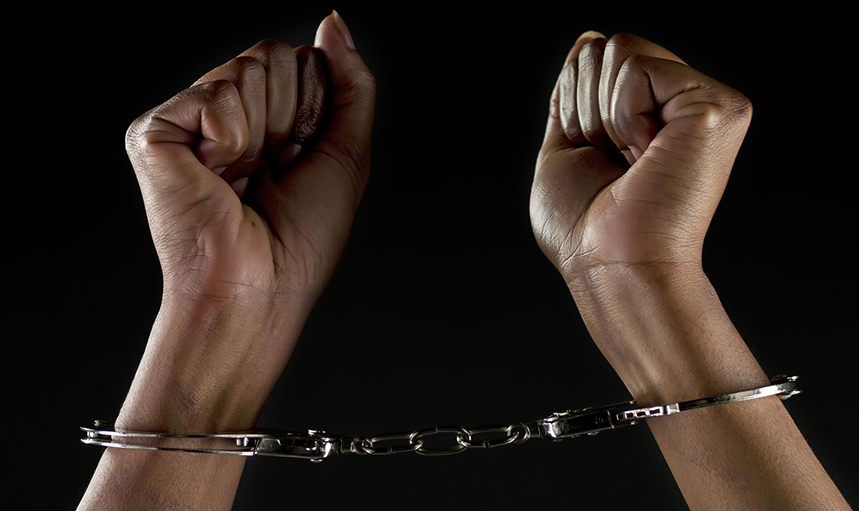 Many BAME pracitioners unshackle themselves from an industry that holds them back to set up their own consultancies.

BAME professionals said that their day-to-day experiences are affected by a lack of diversity, being deprived of opportunities for certain tasks and projects, as well as working on more prestigious accounts. At best, progression feels slower. This issue affects BAME professionals at all stages of their careers and has led to many leaving their roles and/or deciding to establish themselves as independent practitioners.

“The role had been promised to me, but it never materialised, and I got myself another job instead. As I left, I discovered that the job had been given to a more junior colleague who I’d been informally mentoring. The woman who secured this position is white, privately educated, went to a top university and is well-spoken, she fitted the mould. There was no formal interview process as it was an interim position (initially). It felt like they kept me at a certain level but didn’t want to promote me into that final leadership position.”

“There are certain things I’ve wanted to work on here and haven’t got them. I haven’t got anyone here who’s got my back yet. I haven’t had the opportunities here I thought I would.”

“I did experience unconscious bias as I became more senior, with senior management recruiting in their own image and me feeling my face didn’t fit.”

“We don’t have enough BAME people in senior positions, I think it's unconscious bias. We don’t, therefore, have enough senior mentors and role models around to show us how we need to develop to get into senior positions. There are mentors at the junior and mid level but less and less as you progress through the industry.”

“The issue is not with the marginalised groups, we’re not the ones who have a problem with working with other people. But it falls to those marginalised groups to do all of the work in an organisation. It’s not my unconscious bias, as a Black woman from a council estate, that other people are unable to hang out with people who don’t look like them, it’s their unconscious bias that stops the progression.”

“It made me so angry and completely dented my confidence. But after a couple of months, it is what turned me around and was the turning point in my career. I now realise that it is not an industry that has allowed me to be myself and this is such a shame. We should be celebrating and embracing the diversity that BAME people could bring, rather than shutting it out. I morphed into what I thought I should be and now, as I launch my own PR brand, being myself sits at the very heart of what I am trying to do.”

Read next: Working in a majority white organisation robbed me of my mental strength – I am still recovering

And this: It's the industry stopped telling us we're not the right fit

And this: PRWeek reflects on diversity in the industry