Marcus Rashford has been widely praised by top lobbyists and industry leaders after convincing the Government to extend its school meals voucher scheme to cover the summer holidays.

After raising £20m to to supply three million meals to vulnerable people through the charity FareShare UK during the coronavirus lockdown, Rashford used his profile to raise awareness of food poverty and urge the Government to reverse its decision not to provide the vouchers during the summer.

About 1.3 million children in England are eligible for free school meals and it is estimated that more than 200,000 have to skip meals because their families cannot access enough food.

The Manchester United forward penned an open letter urging the Government to reverse its decision against extending the scheme, in which he said the system was “not built for families like mine to succeed, regardless of how hard my mum worked”, and that the issue was about “humanity, not politics”.

"Food poverty in England is a pandemic that could span generations if we don't course-correct now,” Rashford said.

The campaign included an op-ed in the Times, media appearances, including a widely acclaimed appearance with BBC (see below), social and digital media, and personal phone calls with Prime Minister Boris Johnson, who praised Rashford’s contribution to the debate around poverty.

Industry leaders widely praised Rashford’s efforts, with one – Cicero/AMO executive chair Iain Anderson – describing him as one of the UK’s top lobbyists.

Anderson told PRWeek: “This is one of the fastest lobbying campaigns I have seen. Joanna Lumley and the fight for the Gurkhas is the last one to be so effective, but Marcus Rashford beats that hands down. An authentic story that resonates is the key.”

PRWeek approached other industry leaders to share their thoughts on Rashford’s campaign and why it was so effective.

Marcus Rashford has transformed overnight from a footballer to one of the country's top lobbyists. His campaign is authentic and pulls on many emotional levers – some of the reasons why it has been particularly successful.

His background, his experiences, they all contribute to making him the perfect champion for the cause.

Coupled with his honest, human communication and the way he has positioned this as a campaign of the people, for the people, Marcus has shown us all how to get a groundswell and lobby for change in today’s climate.

From purely a PR perspective the campaign worked because it was simple, the objective was clear, the message was consistent and ultimately put to the right audience in an effective manner in order to force change – something that all good PR campaigns should strive to do.

However, I believe the true weight has come from a societal point of view. Marcus has campaigned for something that is extremely important to him – and this message has again been clear.

He hasn’t done this to better his image or as a win/win ‘PR’ op, he hasn’t done this due to the increasing pressure on high earners within football to do something within a nose-diving economy – he’s done this because he’s lived it and knows full well the consequences of the issue at hand and the impact it has on millions of children across the country, perhaps even more so than those in charge. With that weight comes impact, and that’s how he has managed to force Number 10 to #maketheUturn.

Maybe we’d be in a different state if those in charge were more representative of society today.

Rashford certainly played a blinder and pushed the Government into a corner. COVID-19 has heightened the nation’s awareness of the stark inequalities and poverty prevalent in the UK. People are feeling vulnerable, so the very idea that children of truly vulnerable families were to be denied school meals was always going to be a big PR FAIL.

The timing of Rashford’s straightforward advocacy was perfect. He had a simple message.  One which was personal to him, but also resonated with anyone and everyone who heard it because they knew it was true.

The story of a rich Premier League footballer – who was sincere and knew what it was like to be hungry – took the issue of food poverty out of the shadows and put it front and centre. Rashford scored an important goal against Government and methinks we will see more social justice issues come into play as the impact of COVID-19 deepens and widens. Result! 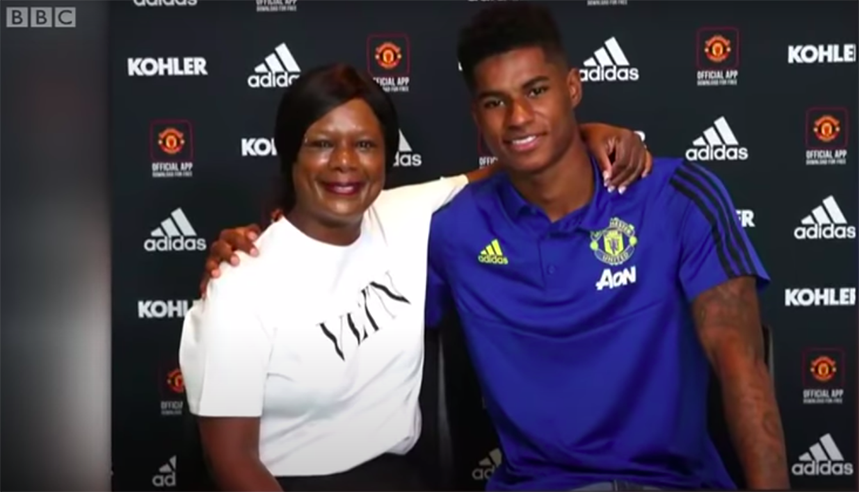 Marcus Rashford should be an inspiration to all of us, in a world where the Government struggles to land a single message – despite having everyone’s attention and a huge media budget – he has delivered policy change through drive, personality, passion and a real sense of what is right and wrong.

Since day one of lockdown this has been his driving ambition – as well as recovering from injury, surprising key workers with tickets to Old Trafford, and leading workouts for thousands of youngsters…

Marcus built an incredible campaign. Driving awareness and education through his partnerships with FareShare and the Co-op, building support and allowing everyone to be a part of the movement, and finally pushing for a simple and achievable action that was impossible to ignore.

Not only has he forced a Government U-turn, he has gone a long way to remove the stigma of free meals. Marcus, we salute you.

The Marcus Rashford campaign is an inspiring example of the power of modern PR for good in the way it mobilised public support and attention to bring about a U-turn in Government policy literally overnight. His open letter to MPs shared on social media is lobbying at its finest, setting out his personal experience backed up by facts and figures and concluding with a compassionate appeal to Government.

We talk a lot about ‘authenticity’ in communications and Marcus Rashford succeeded in that with his letter, social-media posts, Times article and media interviews. He stayed on-message throughout, focused on the goal he wanted to achieve, food vouchers and #maketheUturn, without ever straying into politics.

The Government had no choice but to take a read of public mood, which Rashford had tapped into, and respond.

From a PR perspective, this is an excellent case study of an integrated campaign that spans lobbying, media relations, influencer PR and digital PR.