The annual ‘Salary Guide’, by specialist recruitment firm The Works Search, gathered data on 3,000 corporate comms professionals to produce insights on salaries and bonuses in agencies and in-house teams and interviewed 350 others for their opinions on pay, benefits and flexible working.

The data and survey material was gathered during the calendar year 2019, before the coronavirus pandemic arrived in the UK.

Nearly 60 per cent of respondents were women and the majority of all those surveyed were in the 24- to 39-year-old, or 40- to 55-year-old age brackets.

Nearly two-thirds of those surveyed had in-house roles and the remainder worked in agencies. Nearly 80 per cent worked in London and almost one in ten worked abroad.

The report authors said there had been little movement in the salaries of those working for either in-house teams or agencies, with the average salary increase for both at six per cent, the same as last year’s report.

However, more than three-quarters of those working in-house and a slightly smaller percentage of agency staff received a pay increase of some kind in 2019.

The average salary for the most junior in-house job the report measured – that of ‘PR executive’ – was £34,000, up five per cent on the year before.

However, the highest salaries in this band – in what the report authors defined as 'the common range' – were up to £80,000.

Those working at ‘comms manager’ or ‘PR officer’ level received the highest percentage increase in their salaries last year.

Those with ‘senior account executive’ and ‘account manager’ roles fared better, with an average salary of £27,000 and £37,000 respectively and average increases of nine per cent on the year before.

However, the real winners, in salary terms, were those with the title of ‘managing director’, who took home an average salary of £146,000, compared with £135,000 the year before.

Overall, senior account executives, account managers and associate directors received the largest annual increases in their salaries, perhaps reflecting a retention strategy on the part of agencies for hard-to-fill roles.

Agency or in-house: who got the best pay increases?

However, for nearly a quarter of in-house employees and nearly 30 per cent of agency staff, salaries did not change at all compared with the previous year.

According to the report, women received an average pay rise of six per cent – in line with the overall average – while men saw their wages increase by an average of five per cent.

But a slightly lower proportion of women than men (64 per cent versus 67 per cent) indicated that they were happy with their pay levels.

Overall, 65 per cent of all those surveyed were happy with their pay – up from 60 per cent the previous year.

Bonuses for agency staff, as a percentage of salary, overtook those for in-house teams for the first time in the annual report’s eleven-year history.

And more agency than in-house staff, 67 per cent compared with 64 per cent, received a bonus during 2019. 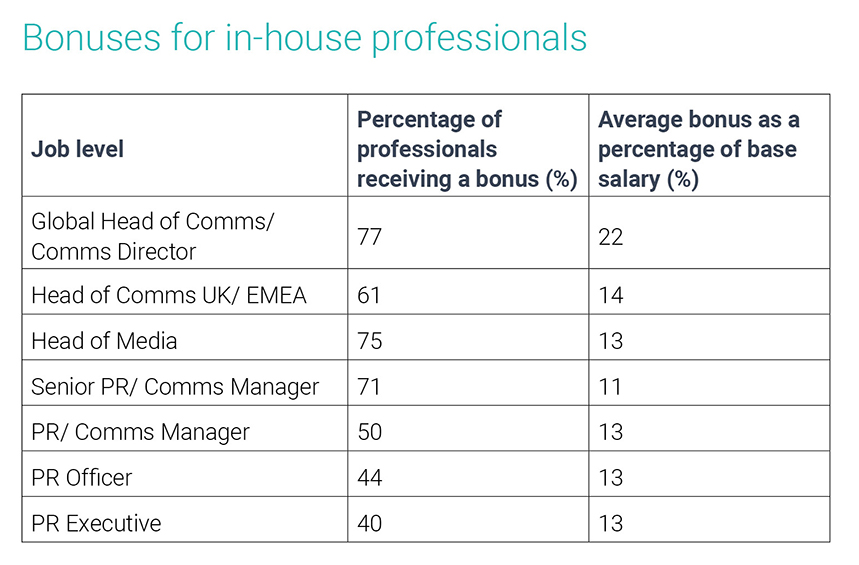 For in-house teams, the likelihood of receiving a bonus – and the size of that bonus – rose with seniority, with some exceptions.

Only 40 per cent of those with a ‘PR executive’ title received a bonus and this was an average of 13 per cent of their base salary.

Across all levels of seniority, 64 per cent of in-house staff received a bonus in 2019, up one percentage point from the year before. 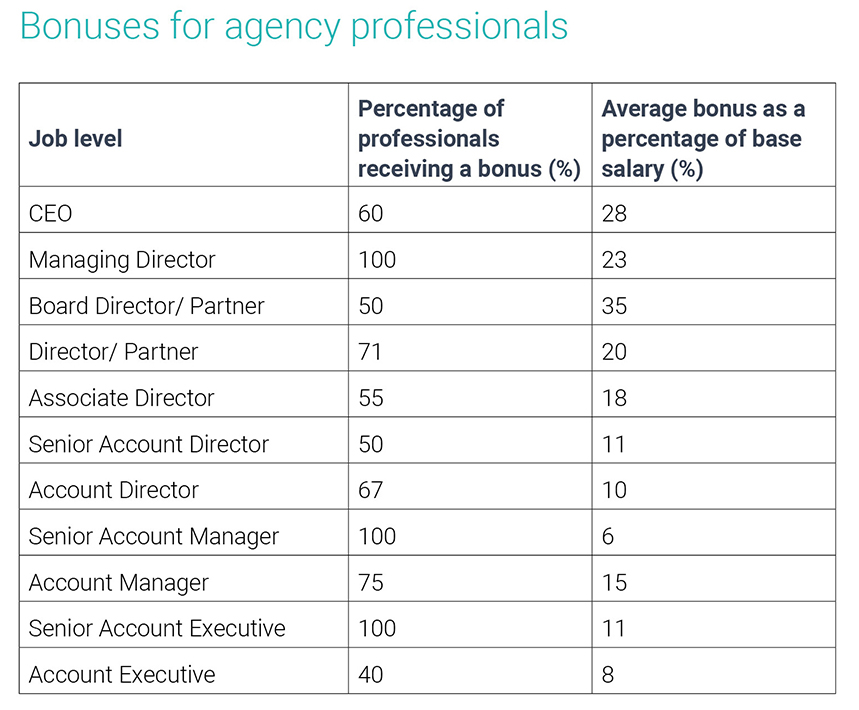 Agency staff at all levels of seniority were more likely to receive a bonus last year than their in-house counterparts, except at the lowest level of seniority.

This perhaps reflects the battle by agency chiefs to retain staff at these levels last year.

Only 60 per cent of agency chief executives received bonuses but these were an average of 28 per cent of their base salaries, the second highest of those measured.

Those with the title of ‘partner’ exceeded chief executives on bonus pay. Half received an average bonus of 35 per cent of their base salary.

Overall, 67 per cent of all agency staff took home a bonus, which was up one percentage point on the previous study.

Agency or in-house: who got the best bonuses?

Once again, the report authors analysed in-house and agency bonuses to find out which were better rewarded.

The report authors surveyed respondents on the range of benefits they received in their workplace, including the opportunity for flexible working.

Among those surveyed for the report, 99 per cent of women and 90 per cent of men rated the opportunity for flexible working as being 'important', showing the level of demand for these workplace policies even before the coronavirus pandemic made working from home a necessity. 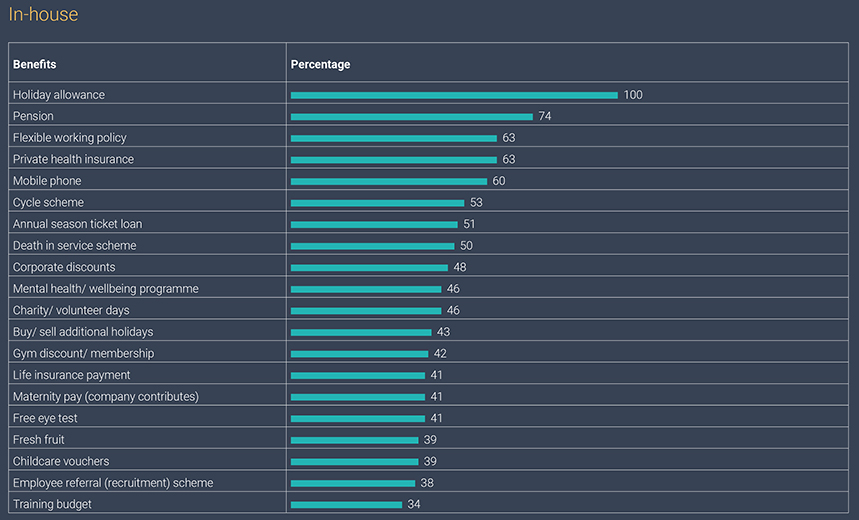 Across the board, in-house employees received more high-value benefits than their agency counterparts, the report authors noted.

The proportion of in-house employers offering flexible working opportunities rose significantly, with 63 per cent now offering this policy in the workplace, compared with only 35 per cent the year before.

This sharp increase could be read as a retention strategy on the part of in-house employers, in response to employee demand. 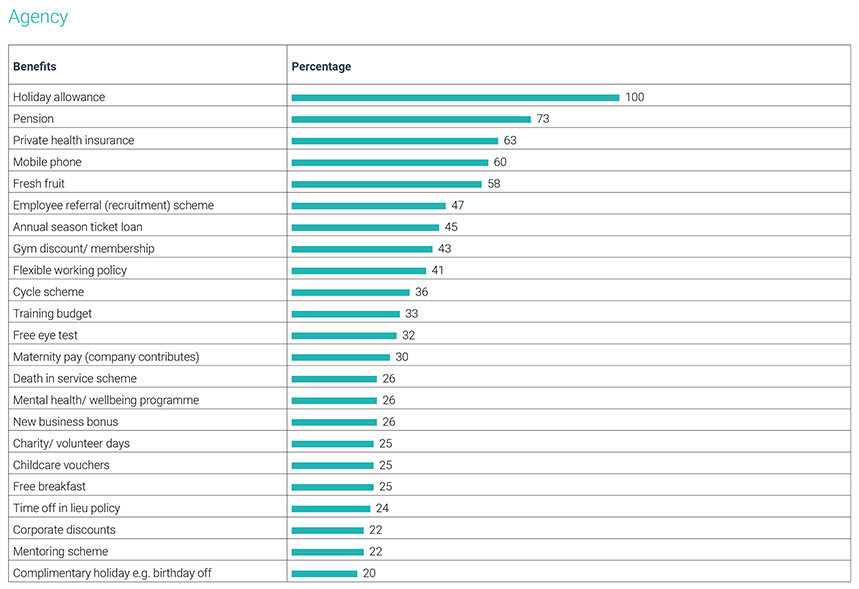 Agencies kept up with in-house teams on pensions, private health insurance and holiday allowances but fell behind on high-value benefits such as a car allowance, with only two per cent of respondents telling the survey this was offered, compared with 23 per cent of in-house respondents.

On flexible working, however, agencies fell well short of their in-house counterparts with just 41 per cent telling the survey this was the policy in their workplace.

However, that is 10 percentage points higher than in the previous study and the improvement shows that agencies, too, have been starting to respond to employee demand for flexible working.

Sarah Leembruggen (pictured below), managing director at The Works Search, said the “dramatic shift” to working from home during the COVID-19 outbreak would only serve to increase the demand for flexible working policies across the board. 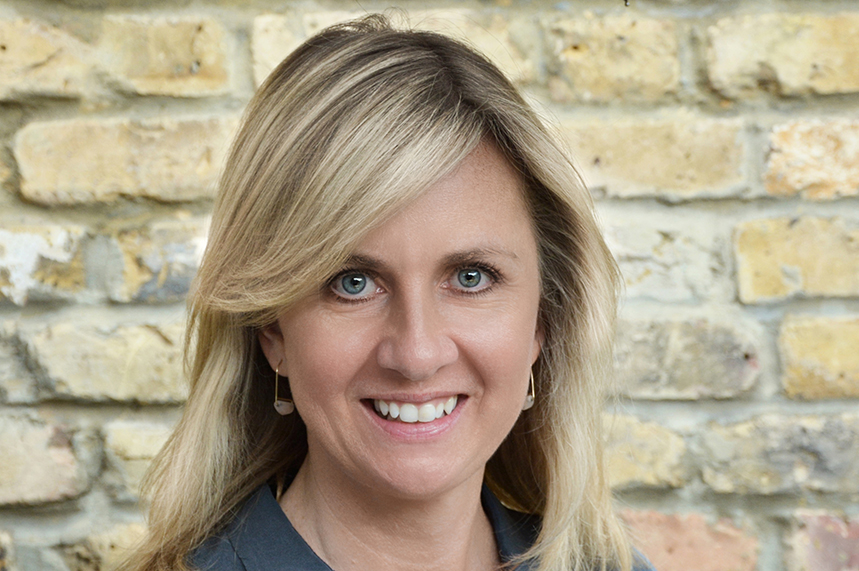 She added: “It is important for employers to communicate how we will be working as we prepare to return to the office (or not). Now that we have all tried and tested the working from home model, remote and flexible working will be at the forefront of every employer and employee’s mind.

“With the current situation unlikely to return to normal any time soon, and many people suggesting that we may never return to pre-COVID-19 working practices, companies are certainly going to need a much more flexible approach to work.”