International news has been dominated by #BlackLivesMatter (BLM) protests across the US. The killing of George Floyd, facilitated by generations of systemic racism and police brutality, has spurred thousands to spill onto the streets, and the movement has stirred a reckoning among many regions across the world as they reflect on patterns of anti-blackness, police brutality, and colourism in their own backyards.

In Tokyo, protesters marched in solidarity with a Kurdish man who was stopped while driving and assaulted by police. In Thailand, protestors gathered on Zoom to observe eight minutes and 46 seconds of silence for George Floyd, in honour of the length of time Floyd was pinned to the ground by a police officer. 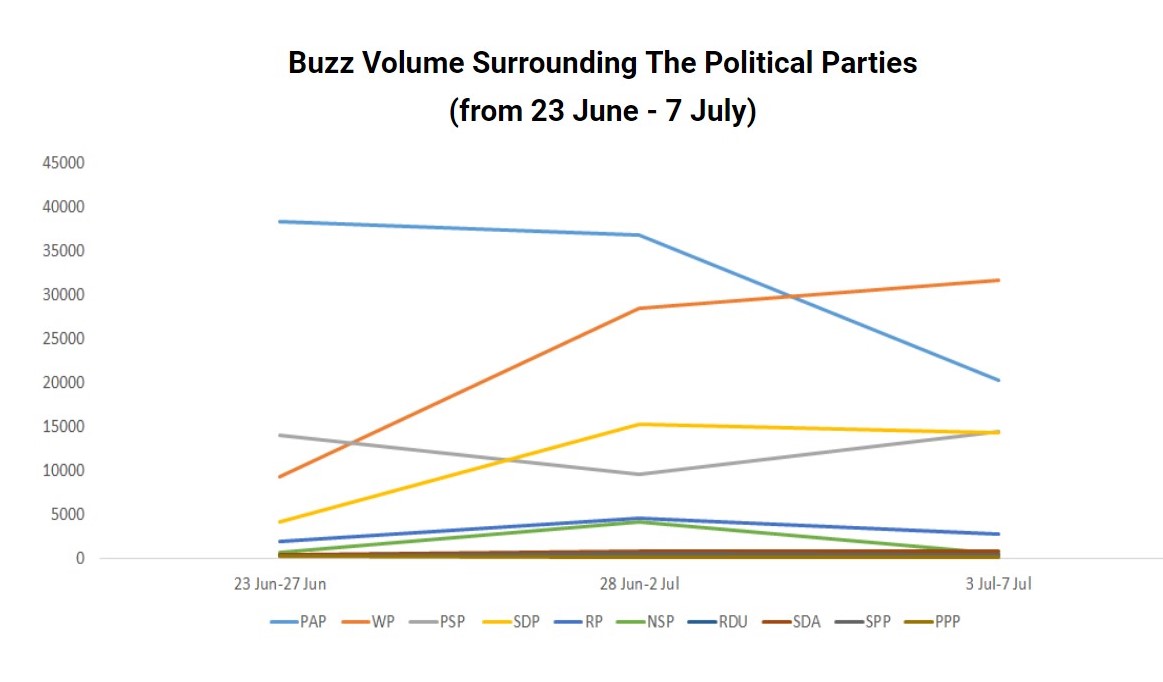 In Malaysia, conversations around anti-blackness, deaths of Malaysian-Indians in police custody, and mistreatment of migrant workers circulated on social media and independent news outlets. In Singapore, influencers such as Preeti Nair and independent news outlet Rice Media have created content around anti-migrant sentiment and Singaporean-Chinese privilege. In India, celebrities who publicly endorse whitening beauty products have been criticised.

So with all this going on and rousing conversations in the region, where are the brands?

It's worth acknowledging that this is all taking place with a deadly pandemic as a backdrop. Many brands are putting out fires, finding solutions to staff retention, and cushioning damage to bottom lines. This is undoubtedly an extremely challenging time for everyone, brands and organisations included.

But I'd also like to point out that racism and the impact of coronavirus are not mutually exclusive. In fact, the last few months have only intensified the struggles of poor and working-class communities.

In Singapore and Malaysia, for example, spikes in coronavirus infections among migrant workers have shone a light on poor living conditions, as well as xenophobia. This pattern is also evident in the US, where black communities are at higher risk of coronavirus fatalities, and the reasons for this cannot and should not be dissociated with the matter being discussed at the moment: systemic racism.

When coronavirus struck, the power of brands rallying around a tragedy was frankly inspiring. Our compilation of brand reactions shows that brands are capable of showcasing care and responsibility, serving the community when it needs aid, and communicating with tact and empathy.

In the last week or so, I approached eight agencies (across PR, media and creative) to see where industry leaders stand on brands' radio silence on the anti-racism movement. One leader came back to say it was too "sensitive" a matter to comment on, another said the team was "uncomfortable" with commenting, and yet another said "it didn't have much to add to the story". One comms head on the brand side said she "wasn't fully informed" enough to comment. I understand that we may be taking the time to learn and grow, but these issues have been deeply rooted for generations and are not simply part of an 'overnight crisis' owing only to Floyd's death.

In short, these responses are simply not good enough. Brands and organisations are afforded second chances over and over again, while marginalised communities and POC continue to fight on the frontlines while also forced to deal with the lived realities of racism. Anti-racism should not have to be a 'sensitive', 'risky' or 'brave' stand for brands; it should be a given.

The fact is that there is no correct 'time and place' to talk about racism. As much as we deny it, this is an issue deeply entrenched in the way we work, communicate, and ultimately consume. And brands and organisations—especially large corporations that benefit from systems that uphold supremacy—cannot be absolved of the responsibility to 'fix the problem'.

Here’s some advice for brands in Asia:

Don’t say something just for a participation trophy

Before you actually do publish a statement or vow to take action, it’s worth thinking about your brand’s (knowing or unknowing) complicity in supporting oppressive systems and actionable ways to serve the community. Homogenous feel-good statements and damaging language such as “All Lives Matter” or “We Don’t See Colour” offer no respite and can be counter-productive to the work of many activists and protestors. Mistakes may be made along the way, but listening and holding oneself accountable are part of the process. 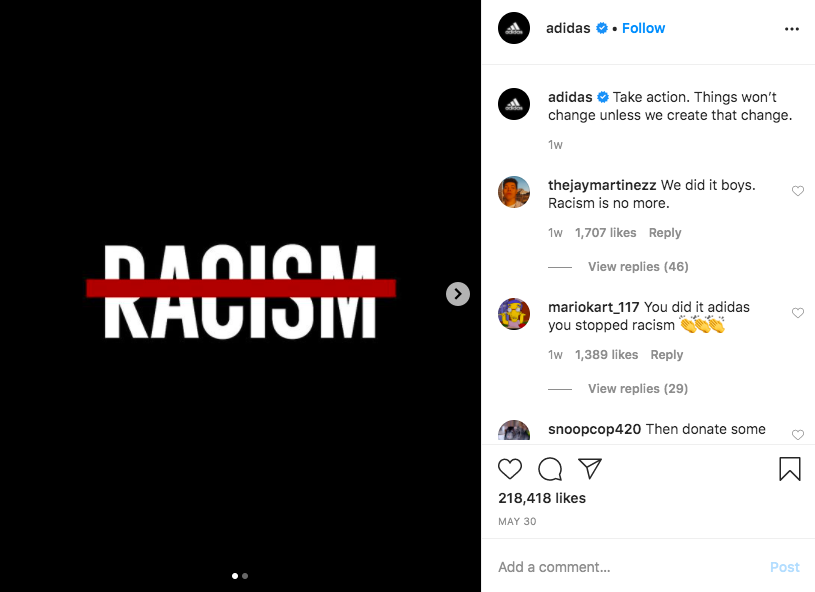 Adidas, for instance, simply put out a visual with the word 'racism' and a strikethrough across it. Social media users called the visual empty, vague and lacking a roadmap for change. Their rival, Nike, on the other hand, backed up their "Just Don't Do It" campaign with a US$40 million commitment over the next four years to support the black community. However, the latter is still being held accountable for its lack of inclusivity in its executive leadership team (as well as its tax practices).

Allegiance should be pledged to the cause in the long-term, and not to the 'moment'.

There's no point to brands running passionate, flashy anti-racism campaigns if their own workplaces are unable to practice what they preach. Employees and consumers are quick to call out performative activism, and brands have been publicly slammed for this.

American publisher Refinery29, for example, was called out after black staff spoke out on being underpaid and dealing with microaggressions in the workplace. The same publisher has a segment on the site dedicated to celebrating black voices, and this content has been monetised in the past. This type of corporate hypocrisy won't stand, and brands would do well to think about internal leadership as well as providing marginalised staff avenues to safely voice out. 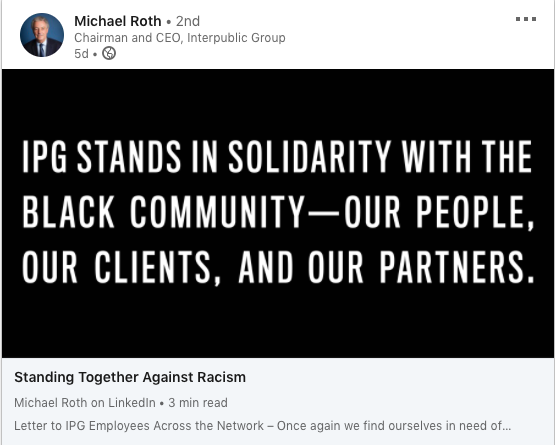 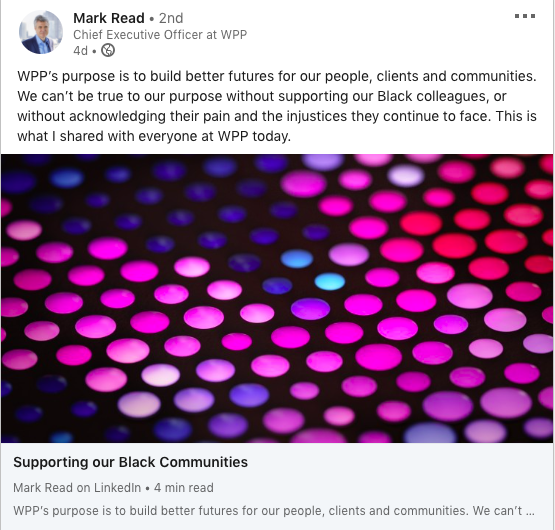 Agencies are not exempt. WPP's Mark Read and IPG's Michael Roth both published memos in support of the BLM movement. Incidentally, WPP's board has zero black people, while IPG has one. Beyond simply hiring black and POC staff to lead diversity initiatives, a variety of voices should be reflective across all levels.

Boards of large corporations hold great power, and sometimes, those in privileged positions sacrificing that power can prove meaningful. For example, co-founder of Reddit, Alexis Ohanian, gave up his seat on the board, and urged that a black person take over his position. His move was widely lauded.

Live out your brand purpose

In the last couple of years, we've covered numerous reports and studies around the importance of brand purpose and how it's shifting consumer behaviours.

The fact of the matter is, consumers are voting with their dollars and it simply makes good business sense to stand on the right side of history. Increasingly, consumers are backing brands that align with their political and social beliefs, so brands should carefully weigh the cost of distancing themselves from uncomfortable conversations because of "political sensitivity".

What's important here is anti-racist efforts – despite it being a possible boon for the bottom line – should be sincere, humane, and tangible. To repeat my point above, simply reiterating messages of hope isn't enough; brands have to roll up their sleeves and accept that dismantling oppressive systems is not always going to be 'comfortable'.

As Desmond Tutu astutely said: "If you are neutral in situations of injustice, you have chosen the side of the oppressor". 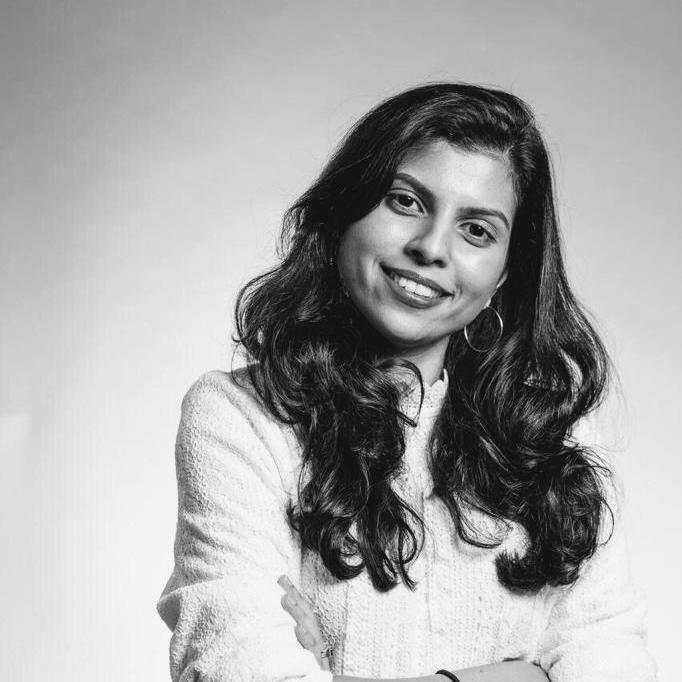