The world’s favourite toy manufacturer, Lego, has joined the chorus of disapproval against the treatment of black people that has dominated the newswires over the past seven days. Although not the first brand to attach their moniker to the cause, or make a sizeable donation ($4m) to “organisations dedicated to supporting black children and educating all children about racial inequality”, the company made a bold statement as to its values and ethics through their actions rather than via any kind of formal press statement.

Lego emailed its reseller network and requested they pull the advertising for over 30 products that feature police officers (including dog units, patrol cars, mobile command centres and various other models). Also included in the list of products was the adult-builder version of The White House.

The company didn’t request its affiliates to stop selling or even remove the products from their shelves and listings, and rightly so. Indeed, while the rejection of marketing The White House product can be considered a clear signal as to Lego's disdain for President Trump, doing so for all police-related products is different; it has the potential to be seen as being overtly antagonistic and positioning the company as being anti-police and this is the chink in this campaigns armour.

But that aside, the simple act of positing a solitary Tweet and not releasing a public statement by opting instead to message its network of affiliates sends a powerful message: ‘You have bought into our products and we’re thrilled you love them enough to want to sell them, but we feel quite strongly about the tragic events in the US and we hope you do, too.’

The very fact that this story emerged from within Lego’s network and not from the company itself, suggests their partners have very much bought into, and share, its values.

The health service has been top of mind for the last three months for obvious reasons, and the acute shortages of suitably qualified staff have become all too clear to see. As someone whose mother moved to England from Ireland in the 1960s to become a nursing sister for some 20 years, this is an issue that has plagued the NHS since time in memorial.

What is particularly wonderful about Education and Employers Charity’s video is that it involves conversations taking place between the next generation of workers and current healthcare professionals who are fielding questions about what it’s like to work as a doctor, nurse, pharmacist and all manner of other roles. There is no attempt to ‘sell’ a career in the health service and that gives it greater impact and ‘buy in’.

We have all been inspired by those working for the NHS.

Young people now want to find out more about the jobs they do & their career routes. So we have created interactive virtual ways to allow them to ask questions directly
?? https://t.co/lLBbcx77aw @NHS_HealthEdEng @NHSuk pic.twitter.com/JK168s7L0r

Bristol Dry Gin: Sorry, not sorry. Promise not to do it again. Oh wait, bugger, we’ve said that before

The beginning of June will be a week to forget for one brand.

On Monday, the Bristol Gin Company published a Tweet that was the very definition of poor taste. The company claimed their Molotov cocktail-esque image and “Voted No.1 gin by rioters” was simply “poking fun” at Donald Trump’s “looters and shooters” post whilst the US was fast-becoming embroiled in a widespread series of protests following the death of George Floyd. 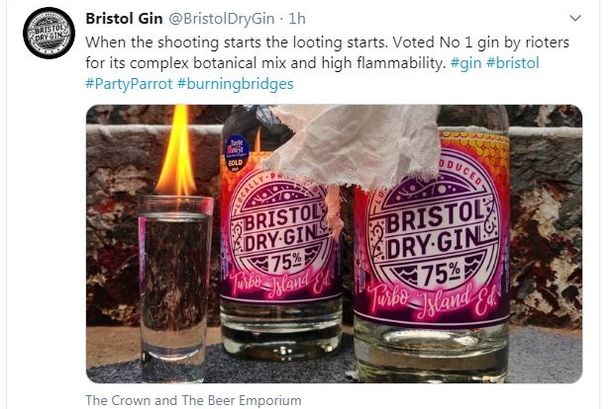 There ensued a public backlash to the Tweet, with the Mayor of Bristol, Marvin Rees, quick to point out that “the attitude of this company in no way reflects the spirit of our city.”

Meanwhile, BBC technology reporter Rory Cellan-Jones Tweeted in disbelief: "Has your account been hacked?” BBC Breakfast presenter Dan Walker was a tad more scathing and described the post as “vile.”

The following day, the company issued a p**s-poor ‘apology’ statement that highlighted the ineptitude, ignorance, insensitivity and total stupidity of the company.

In its statement, which quoted a ‘spokesperson’ rather than a named individual, the company said this was “not a calculated publicity stunt”. The statement went on to say: “We did not foresee that something we tweeted – no matter how poorly chosen – would have such an impact.”

Quite how this could have been the case is baffling – how could they not see the potential impact this might have?

It added: “We will also be reviewing how we use social media” – err, it’s not about how you use social media, it’s the brand message you’re putting out that needs to be reviewed. This was followed by “we will not do it again.”

A message from the team following recent events. pic.twitter.com/XhhfUhl5hS

But I wouldn’t bet my house on this, the company has precedent: in 2018 when it rushed to launch a new brand of vodka called ‘Novachok’ – the same week that Dawn Sturgess died from its namesake Russian nerve agent in Salisbury.

If taken in isolation, Bristol Dry Gin could take the hit to its reputational damage and turn it around over time, providing it changes its practices and gets rid of the numpties running its comms and install someone who knows what they’re doing and can advise accordingly.

But the company has form for creating publicity pickles for itself and it will be difficult for Bristol Dry Gin to come back from this.