The Government’s “piecemeal and arrogant” defence of Dominic Cummings will make it much harder for it to act with authority on COVID-19 messaging, with one industry leader warning: “We are stepping into Trumpian comms.“

Over the long weekend, the national conversation has been dominated by revelations resulting from a joint investigation by The Guardian, Observer, and Daily and Sunday Mirror that Cummings, the Prime Minister’s closest and chief aide, broke lockdown rules on several occasions to travel north to County Durham in March and April.

Number 10, Government ministers and MPs initially launched a staunch defence of Cummings, suggesting he had acted within the letter and spirit of the rules, under exceptional circumstances – a defence that was widely criticised in the media and on social media.

Boris Johnson added fuel to the fire at the Government’s daily briefing on Sunday, when he said some of the allegations were “palpably false”, and said of his most senior adviser: “I believe that in every respect he has acted responsibly and legally and with integrity and with the overwhelming aim of stopping the spread of the virus and saving lives.”

Interesting that @BorisJohnson didn’t even go for the cover of an inquiry. Calculating he can snuff it out by effectively telling everyone to move on.

‘How not to handle a crisis’

PR industry leaders have widely criticised the Government's handling of the situation.

Louise Vaughan, managing director of reputation management consultancy Definition, told PRWeek the Cummings scandal is a “textbook case” of how not to handle a PR crisis.

“You should be using ‘f-words’ is a situation like this – being first, frank and fast with a response – not the ‘f-up’ we are seeing from the Government,” she said. “Piecemeal and at times arrogant rebuttals smack of hypocrisy, are undermining public campaign messages and are taking attention away from some of the critical, wider issues in play."

Vaughan said the public are looking for “integrity, decisiveness, leadership and purpose” across the public and corporate sphere.

“Ultimately, [the Government] need to quickly stop digging, acknowledge the issue, apologise and, I suspect, throw in the Cummings spade,” she said.

“The key to crisis leadership is to say it, mean it and live it. You have to be clear with people what the situation is and be confident in what you are saying and asking of them,” she said.

“But above all, you have to demonstrate it through your own behaviour. Trust and confidence are critical when you are dealing with a crisis.”

PR consultant Brett Walker said it is not just Cummings and Johnson who could pay the price politically.

“The credibility of the parade of ministers that have defended Cummings has undoubtedly been damaged too,” he said. "All of this is only going to add to public confusion after what was a garbled address to the nation by the Prime Minister announcing the new rules several weeks ago.”

Other PR leaders believe the Government should have taken a more contrite approach to appease an increasingly angry public.

Steve Hawkes, head of strategic media at BCW and a former deputy political editor of The Sun, pointed out the revelations came at the end of a bruising week that included a U-turn on NHS surcharges.

“You wonder if the PM could have intervened more quickly before trying to draw a line on Sunday night,” he said. “Dominic Cummings is the ultimate Marmite figure; some people love him, a lot hate him. I just feel this whole episode makes it harder for the Government to act with authority on COVID-19 in the days to come. And that’s the biggest fight. We’ll see.”

Prior to the Cummings scandal, Steve Hawkes, Amanda Coleman, Ian Kirby and Annalise Coady to discuss whether the government is losing a grip on its COVID-19 comms. Topics include ‘Stay Alert’ criticism, daily briefings, combative media relations & whether a new approach is required.

Listen to the pocast now

For Helen Furnivall, managing director at High-Rise Communications, there are two approaches that would have played out better for the Government.

“The best thing to do would have been to take immediate action, say it was clearly in breach of public-health messaging and Cummings has to go,” she said. “The second-best action would have been to say it was clearly in breach of the guidelines, Cummings now regrets his actions but the PM doesn’t think this is a resigning matter. But to allow this mess to develop and bring confusion into the messaging and what’s allowed is not just bad in communications terms, it’s bad for public health.”

Annie Goss, a PR consultant with more than 17 years of in-house and agency experience, would have advised the second of these approaches. This includes a statement from Cummings expressing his regret and the Prime Minister backing this up by thanking him for his apology and reiterating his appreciation to the British people for the sacrifices they have made.

“There would have still been noise, and people would still have called for a resignation, but it would have given stronger content for the army of advocates fighting his corner on social media,” she said. “Most people know someone who has broken the rules, so this would have garnered more natural public sympathy and understanding.

“Up and down the country there are thousands of families with young children who have been ill during this period and have muddled through in isolation. Being told now that they could have actually left their home to seek support elsewhere is causing outrage – I have heard the term 'gaslighting' multiple times.” 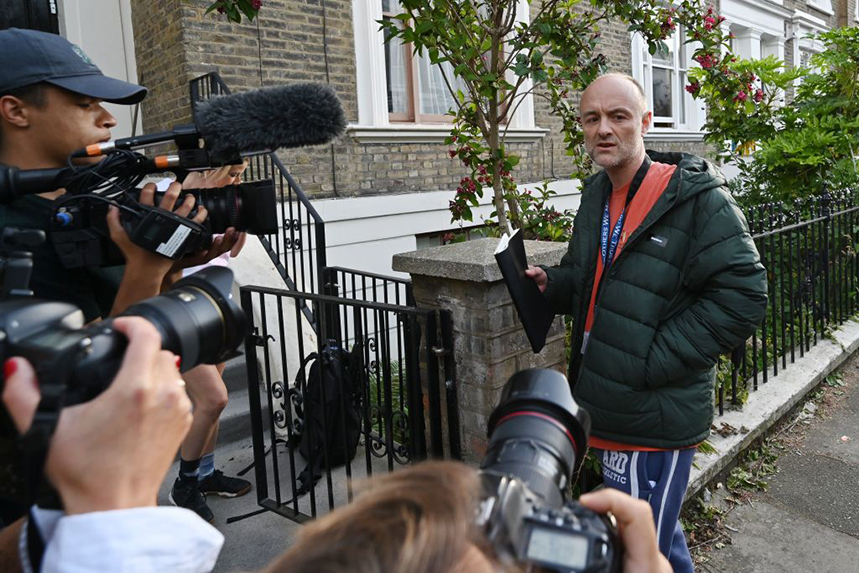 Could media attention have been defused with an apology and accepting a mistake had been made? (Photo: GLYN KIRK/AFP via Getty Images)

This row undermines trust in all future Government messaging, which is where the larger battle will now lie as it begins to ease social distancing rules – a point made by other PR leaders.

"At the start of the month the Government was happy to sack its top scientific advisor, Professor Neil Ferguson, for flouting lockdown rules. In light of that announcement you would expect it to be the Government's strategy to treat any other senior figure who broke the rules in the same way,” Clarity PR chief creative officer Peter Bowles said, adding that a consistency of messaging to reinforce that ‘we're in it together' is what is required now.

“Everything from the line that [Cummings] had 'interpreted' the rules, rather than following the letter of the law, is extraordinarily problematic. The impact could be enormous.

“This could mark a clear tipping point where people ignore the lockdown, pushing up rates of infection. The Sunday Times reported yesterday that just one infection can lead to over a million infections in nine weeks if left unchecked. This is a Government comms disaster that is likely to prove deadly."

So the streets & parks look a bit like everyone woke up today & said: “Fuck it, if he’s done it, I’m doing it”. Leadership is about setting examples and the example Cummings has set is an arrogant, uncaring & dangerous one. Sort it out @BorisJohnson. #CummingsGoingsGate

One of the industry’s top reputation experts and founder of his eponymous agency, Mark Borkowski, believes the Johnson Government has taken a dangerous gamble and is using tactics from the Trump playbook.

“Once again this is a comms crisis and a values failure,” Borkowski said. “If the Government is banking on a Trumpian way forward, believing the country has short-term memory loss and long-term amnesia, [it is] taking one hell of a gamble. We are not going back to any normality. The nation will be reflecting on those who did the right thing.

“Fundamentally it destroys trust. We are stepping into Trumpian comms [and this is a] massive fail.”

Whoever tweeted this might need a job soon...... so let's keep our comms channels open! https://t.co/8Ud1qKm2Nj

Number 10’s comms team will be in overdrive mode now and for the foreseeable future. They’re also likely to find themselves redundant after this debacle - assuming BoJo actually sought their counsel in the first place, of course

In the last 48 hours the Government have basically nuked their own messaging to save Dom. What effect does that have on the wider population and, more importantly, the spread of the deadly virus we still have to deal with?

Our priminister has totally lost any moral compass. What a pathetic travesty. He’s backed his SPAD against our nation. What a moment of leadership abdicated.

Integrity in public life is surely paramount. Credibility in politics is about trust. We need it today more than ever. #COVID19

From staying at home to staying alert, not only have recent instructions lacked clarity, but when senior aides are blatantly ignoring them, how can we expect the public to trust in their guidance?

The damaging thing about this whole issue for gov is that Cummings instantly loses any right to tell others they are out of touch / elite / missing the public mood. That’s properly over now. He has become the thing he loathed.