The campaign was rooted in a unique virtual cast reunion, an idea which was directly inspired by the COVID-19 news agenda and which went on to garner more than 230 fully credited editorial news and feature pieces for a show which first aired in 1983.

The Bill in Lockdown (16:9) – Original cast reunite for virtual party as show comes to UKTV Play from Taylor Herring on Vimeo.

While the Bill is a much-loved show, our creative challenges reflected the show’s 25-year history – indeed, there were no ‘new’ or newsworthy press assets available, moreover access to the former cast was problematic given the nation was in the midst of the COVID-19 lockdown.

Our creative also had to circumvent the fact that the cast had reunited a mere three years previously, to much media fanfare – so a simple get-together (impossible within the lockdown) would be unlikely to cut through.

Thus, our response revolved around turning the pandemic situation to our advantage by staging a unique, ‘virtual’ reunion-style launch party featuring our ‘old’ Bill cast members in lockdown.

The creative was calibrated to resonate with our core 55-plus audience and directly inspired by the challenges the majority of us are facing during lockdown – staying in touch with work and family via video calls and conferences, and attempting to make the everyday as much fun as possible in the face of adverse circumstances.

We hoped the campaign would to inspire our core audience not just to tune in to The Bill, but to replicate the idea by using the latest video tech to stay in touch with their own family and friends during lockdown.

The idea was simple – reunite five iconic cast members who appeared from the very first series and have them answer questions from fans over a Zoom video call.

The challenge was to stage the reunion in such a way that it would engage new and existing fans while also cutting through as national news story.

As such we planned the call in exactly the same way you would a TV production, to ensure that the live event would be seamless, entertaining and newsworthy.

The Taylor Herring team held extensive research calls with each cast member. Anecdotes were prepped to ensure news value – key hooks included police now and then, life in lockdown and speculating what would have become of the cast.

Pictures were going to be key in terms of the sell-in – thus we worked hard to ensure the reunion was as visually compelling as possible. We added a little launch-party pizzazz with the use of some old-school Bill uniforms – reflecting an emerging trend for dressing up for themed Zoom calls.

We also sourced a series of topical backdrops for the cast to use on the call, including a lockdown jail scene, the Sun Hill set, and shots of the cast themselves from 26 years ago (showing them in their first appearances on the show).

Finally, we engaged presenter and series fan Jamie East to host the call. 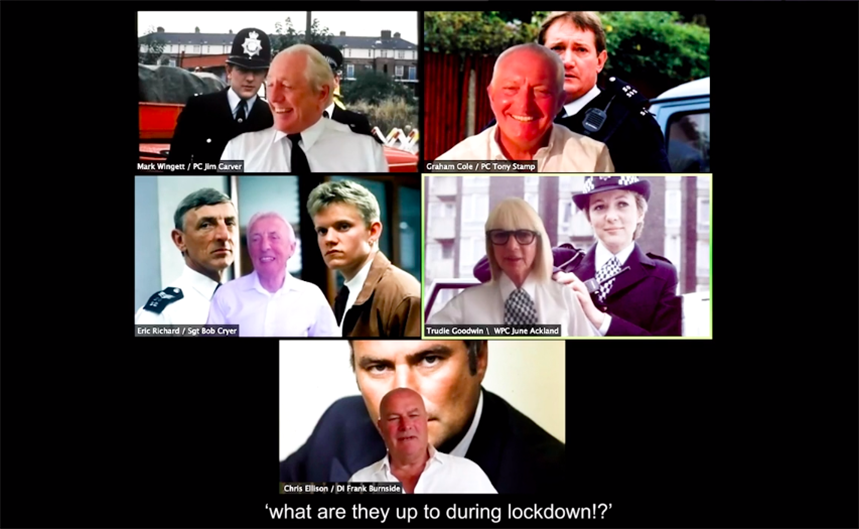 The biggest challenges we faced were rooted in IT and will be familiar to many of us who have had to give ourselves – or, indeed, our parents – a crash course in videoconferencing during the pandemic.

All the cast members required video-call tutorials to ensure they could successfully work the technology, switch backgrounds and share screens. Thus we spent a lot of time in pre-production – testing the cast members' exiting set-ups to ensure they were fit for use, and sending computers (with pre-loaded apps and backdrops) to far-flung corners of the country to ensure a seamless production.

We also found the media sell-in incredibly challenging – a vastly reduced staff on the nationals meant we stretched our sell-in over the course of a week to ensure the story cut through.

The media coverage has been extraordinary – more than 200 pieces fully credited back to UKTV Play (see montage below), including 13 national news outlets and 17 broadcast mentions, including the cast being interviewed on Good Morning Britain. Most importantly, 78 per cent of all coverage included the fully branded UKTV Play video.

Further engagement with the story was garnered on social media via talent and channel posts, and the sentiment has been 100 per cent positive. The Metro said: “The cast of The Bill have reunited for a virtual launch party amid lockdown, and, quite frankly, it’s everything.”

Finally, the work had a direct impact on views and traffic to UKTV Play. The Bill ‘The Early Years’ went straight to the top of the UKTV Play overnights and was the most-viewed title on launch day. Indeed, the first episode of the first series doubled its year-long target for views on the service on the first day.

Since the launch, the shows account for a huge 10 per cent of all viewing on the platform and visits to the UKTV Play site are up 15 per cent vs Jan-Apr 2020 average. 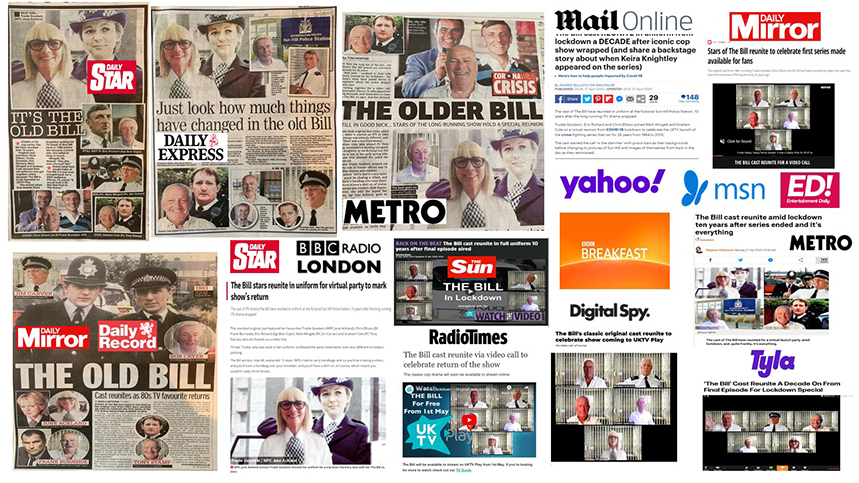 Preparation and planning are key. The media love a news story rooted in nostalgia with a modern hook. However, the success of this campaign was due to the extensive background planning – from an extended week-long sell-in to scripting the key news lines in advance in partnership with UKTV to ensure a seamless production.