Where are you located?
I normally work out of our Boston office, and I'm about 45 minutes north of there along the coast by train.

What's your day like?
We are international, and my mornings usually are spent dealing mainly with our European-based gigs and clients since they sign off about noon for us on the East Coast, depending on where they are. Then my colleagues and clients throughout the U.S. and on the West Coast wake up and get online.

What's your biggest challenge working from home?
My husband and I moved into this home about a year and a half ago. There were home-renovation projects on the list that were a priority but one that wasn't high up was a home office. Now we're wishing it had been.

Are there challenges specific to your location?
Just a couple of weeks ago, I was getting ready for a new business pitch and a wind and rain storm took out a massive 80-foot pine tree right next to our house and took out all the power lines, not just to our home but to the whole street. 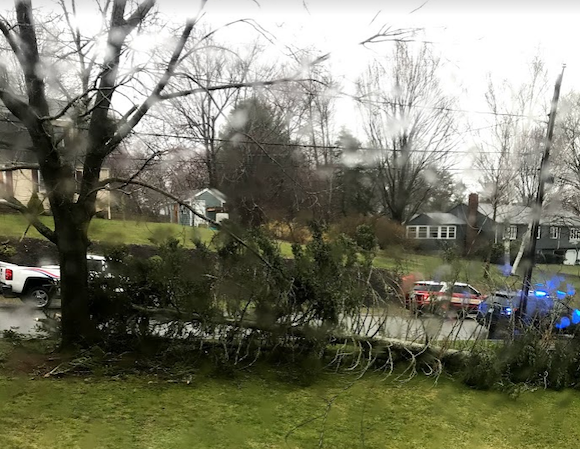 All of a sudden, we were out of power, we were out of hot water, we were out of internet...everything. We hadn't been expecting this, so of course all of our laptop batteries, our cell-phone batteries weren't 100% charged. Here I was about to get on this two-hour business pitch with a dwindling laptop battery, no lights in the home and a really dark rainstorm outside, so it looked like I was in kind of a cave on video.

I had two, three different laptops available to switch to. As one died, I would hop to the next. It was definitely very stressful getting that all figured out up to the minute the prospective client joined, but we actually just found out we won that one.

Someone mentioned that you own chickens?
We inherited the chickens when we bought the home. The people who were leaving couldn't take them with them. So, yeah, I've learned a lot about chickens that I never thought I would. We inherited four, and they were young and just starting to lay eggs. So they were beneficial and we decided to keep them and try our hand at being farmers.

We now have six chickens. We lost one to a coyote attack, but we replaced her and got a couple more. They can be a bit of work because we have everything from coyotes to hawks to raccoons and foxes that all think [chickens] look like a tasty snack. 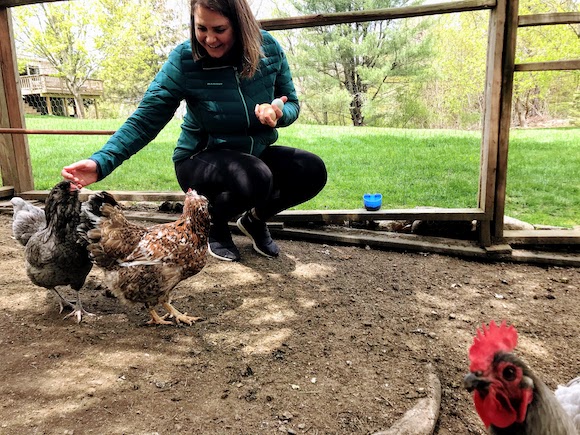 Generally they're pretty safe, but if we hear them really squawking up a storm, it's not only concerning for us but it's also causing a racket for our neighbors who are also working from home. Then we have to kind of go out and make sure there isn't a hawk or something trying to get them, and we also have to collect the eggs and bring them food and make sure they have water and all this.

Has a chicken ever interrupted a Zoom meeting?
Well, yes. Without the home office being done, [my husband and I] are sharing the main floor, and when we're both on a call, I will try and take one outside.

The call or the chicken?
The call. The chickens stay outside. I'll take the call outside and the chicken's noise sometimes gets up there.

Have you had to chase away a predator during the workday?
Yes. Just last week, I was chasing two hawks that were circling the coop.

How do you chase off a hawk?
With just mainly my presence out there as a bigger mammal, but then I also have to text the neighbors who also have chickens saying, 'They're coming your way."

You must have amazing breakfasts.
We are absolutely drowning in eggs. We get about five or six a day. Chickens can only lay one egg every 24 hours, and sometimes they don't, so it's a maximum of six a day. But right now, all of our chickens are very young, so they're producing really well. The eggs are beautiful colors, too. We have one chicken that produces blue eggs.

We have a lot of quiches. We have a lot of omelettes, and I'm baking with fresh eggs so that's been great. [Before the lockdown] my colleagues at work used to get half a dozen here and there, but now all our neighbors are getting little packages in their mailboxes. Even the UPS driver got some yesterday.

What else has been good about working from home?
It has been nice to kind of collaborate and even engage with our colleagues. I think there's a more concerted effort going into scheduling lunch hours and game nights and things like that.