PRWeek's Five Campaigns We Liked in April contest was eventually won – with more than half the votes – by Twitter and male mental-health charity CALM, who brought stand-up comedy into people's social media feeds, raising awareness for the cause and providing some much-needed light relief. The Romans worked on the campaign.

In second place this month was Little Big Moments, a campaign by Ladybird Books, which targets both literacy and loneliness, and involves a pair of matching books sent to a separated child and adult so that they can read together over the phone or a video call. 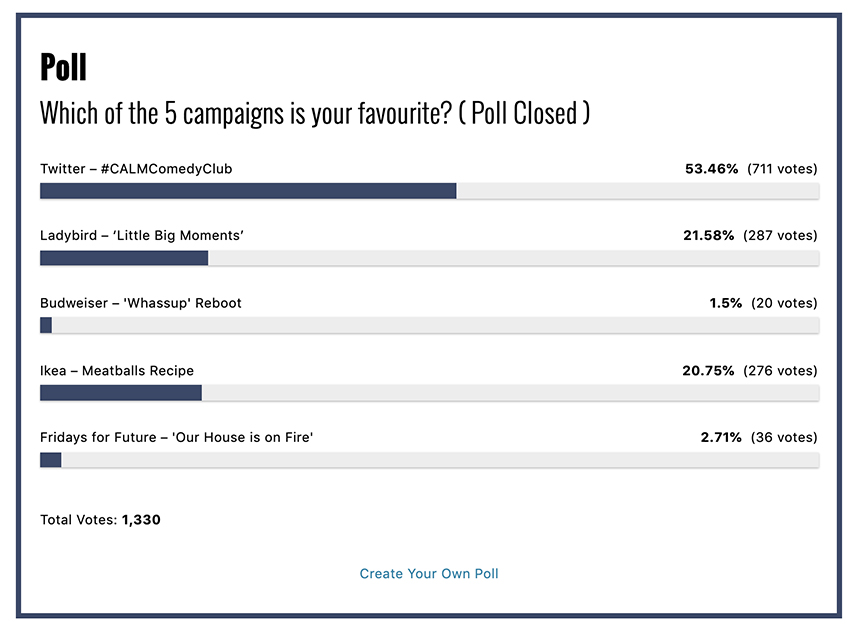 Male mental-health charity CALM (Campaign Against Living Miserably) recorded a 37 per cent increase in call demand in the first week after the UK lockdown was announced. So it joined forces with Twitter and its agency The Romans to bring stand-up comedy into people's feeds each day last week.

It’s Russell Kane live and direct for the #CALMComedyClub.
Get support or donate to help save lives: https://t.co/5jH6XwdSdu https://t.co/wFjpgzw6O0

The campaign aimed to give "people some fun and laughter, but also remind them that we are here should they need us, no matter what,” according to CALM chief executive Simon Gunning.