Just three days ago, the National Telecommunications Commission ordered major Philippines network ABS-CBN to go off-air, the first time it was forced to do so since 1972. Some 11,000 staff worked for the media empire.

When the network's free-to-air service—including 42 TV stations and 23 radio stations—signed off and went blank at 7.52 pm on Tuesday, it sent shockwaves across the country.

Some cited the cease-and-desist as 'long time coming'; while others were outraged and called it a blow to press freedom. The network—arguably the biggest and most far-reaching in the Philippines—has been at the brunt of government criticism, and in February, President Duterte's government sought to strip the network's franchise license.

We just signed off. And people in our newsroom couldn’t even hug each other.

Last December, Duterte said in a speech: "ABS-CBN, your contract is about to expire. If I were you, you're better off selling it. I will make sure that you will remember this episode of our times forever."

While Duterte's sometimes brute and brash administration has often been criticised in international media, the local media landscape has become accustomed to threats from the man himself.

When he was sworn in as president in 2016, he reportedly said: "Just because you're a journalist, you are not exempted from assassination, if you're a son of a b*tch. Freedom of expression cannot help you if you have done something wrong."

"It's a part of our cultural fabric"

"It is also a wake-up call for longstanding institutions to be more aware of the rules and regulations surrounding franchise renewal and commercial laws, which were questioned during the course of this development."

However, many were cautious to declare it a threat to press freedom. The National Press Club of the Phillippines, for example, questioned the network's inability to sort out its franchising issues prior to the closure. In an official statement, it said:

"Why it did not exert enough effort to do so given a congressional franchise's immense impact on its profit and operation should not now be used as an excuse to claim that its belated effort—should it fail—is another 'blow' to press freedom."

The Foreign Correspondents Association of the Philippines was quicker to condemn the decision. In a statement posted on Facebook, it said:

"The order threatens press freedom at a time when the public needs an unfettered press the most. As the Philippines reels from the fallout of the coronavirus pandemic, ABS-CBN's critical eye is needed now more than ever to help inform the public. The move is clearly a case of political harassment against a pillar of Philippine democracy that employs thousands of Filipinos whose livelihoods are now at risk with the order."

The order means that ABS-CBN is unable to operate its free-to-air services, but its cable, digital and social media outputs are unaffected. However, free-to-air services doesn't just comprise the news; it includes variety shows, pre-recorded drama shows, feature films, documentaries, and more. 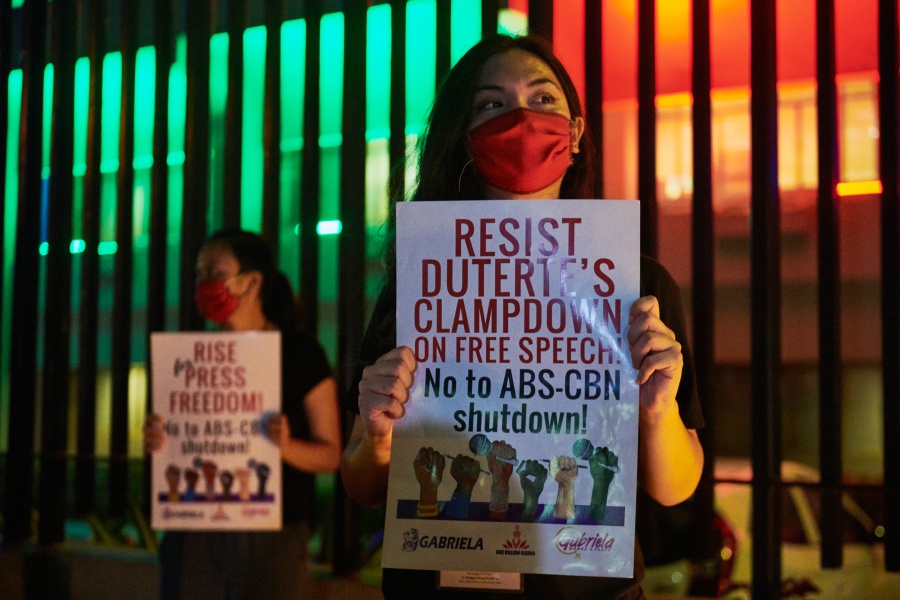 Patricia Malay, SVP and GM at FleishmanHillard Manila, said that much of the Philippines' media consumption is still driven by free TV, despite the fact that smartphone and internet penetration are increasing. Internet penetration in the country is reported to be at 67% in a population of 106 million. On some islands, radio stands as the top channel.

Malay argued that while this order against ABS-CBN is certainly saddening, it shouldn't create an environment of caution for other media operations and journalists. The last and only other time this happened to the network in 1972, then President Marcos was strict about clamping down on media that was critical of the government, and handed down martial law.

"I don't think it's the same environment that we're in now. The press still enjoys their freedom and you will see this because even today, there were a lot of press articles that came out that were critical of the order. And many journalists are using their own platform to speak on what they think is really happening here," said Malay.

"What it's caused is alarm and concern that something like this could even happen. Especially now, when we need a large network like that to be able to accurately report in the middle of a pandemic. There are still a lot of people across the Philippines who might not necessarily have digital access. In far-flung communities, there might even be one household sharing one screen with 25 people. So in that respect, ABS-CBN is really something that many of us live with; it's really a part of the cultural fabric."

Malay said that the closure would bring about more stringent fact-checking on the parts of Google and Facebook, especially with the latter platform relying heavily on local media outlets such as Rappler to identify misinformation.

For context, Rappler is an online news service in the Philippines that is famously critical of Duterte's administration and its controversial war on drugs. In the last two years, it made international headlines for many reasons including getting its certificate of incorporation revoked, which eventually led to the site's founder Maria Ressa's arrest and temporary incarceration.

"Fake news is still proliferating, so all the more now that the remaining news outlets must work very hard to make sure that their news will have integrity. They must be able to remain vigilant and strong in their reporting," said Malay.

"If you're on social media every day and you see these dialogues going on and whatever side you might be on, at least for the most part, I would like to think that there's some rationalism to it."

ABS-CBN's shutdown tonight may be a personal win for #PresidentDuterte but it is ultimately a loss for the Filipino people as it impairs our right to information, freedom of expression, & freedom of the press at such a critical time. #NoToABSCBNShutDown

And because ABS-CBN has successfully diversified outside of free-to-air TV and radio, Malay said the impact for brands will not be significant. Neither will brands be cautious in the Philippines media landscape, she added.

According to a We Are Social report, internet users in Philippines spend an average of nine hours and 45 minutes per day online, compared to four hours and 22 minutes per day in Japan. A separate Talkwalker report said that Filipinos are the world's top social media users with 76 million active users, a 71% penetration rate, and a 13% YOY increase. Facebook trumps Google as the country's most-visited website.

ABS-CBN has managed to leverage major online video and social media platforms to air its shows, and Essence's Bughao said this signals a shift in how Filipinos are consuming content whether via OTT platforms or social media.

"Consumers in general have become more cognisant of how and where to engage content, and more importantly, willing to pay a price to enjoy them. This may trigger a more rigorous check on the types of content available and how guardrails are generated around consumption," she said.

"Video streaming has unlocked possibilities for content creation and distribution. Audiences no longer have to make do with existing expensive contracts and locked programming. But along with this, increased competition can be expected."

Bughao added that the closure might have an impact on local and international brands operating in the Philippines.

She said: "Primetime segments, which aired key programmes aligned with the advertising of prominent brands, are now no longer available. Brands will feel the pinch with the redistribution of advertising spend, loss of audience reach and reallocation of audiences against different channels."