BCW's annual 'World Leaders on Facebook' report showed that in March alone, the 721 pages of world leaders analysed have added 13 million new page likes, a 3.7% increase, almost half of the growth these pages recorded overall over the past 12 months. In particular, Italian PM Giuseppe Conte and those of the governments of Austria and Estonia have doubled their page likes in 2020 alone.

One leader who was cited as an effective leader on Facebook is New Zealand's PM Jacinta Ardern who has regularly used the Live feature during the pandemic to 'check in' on citizens. 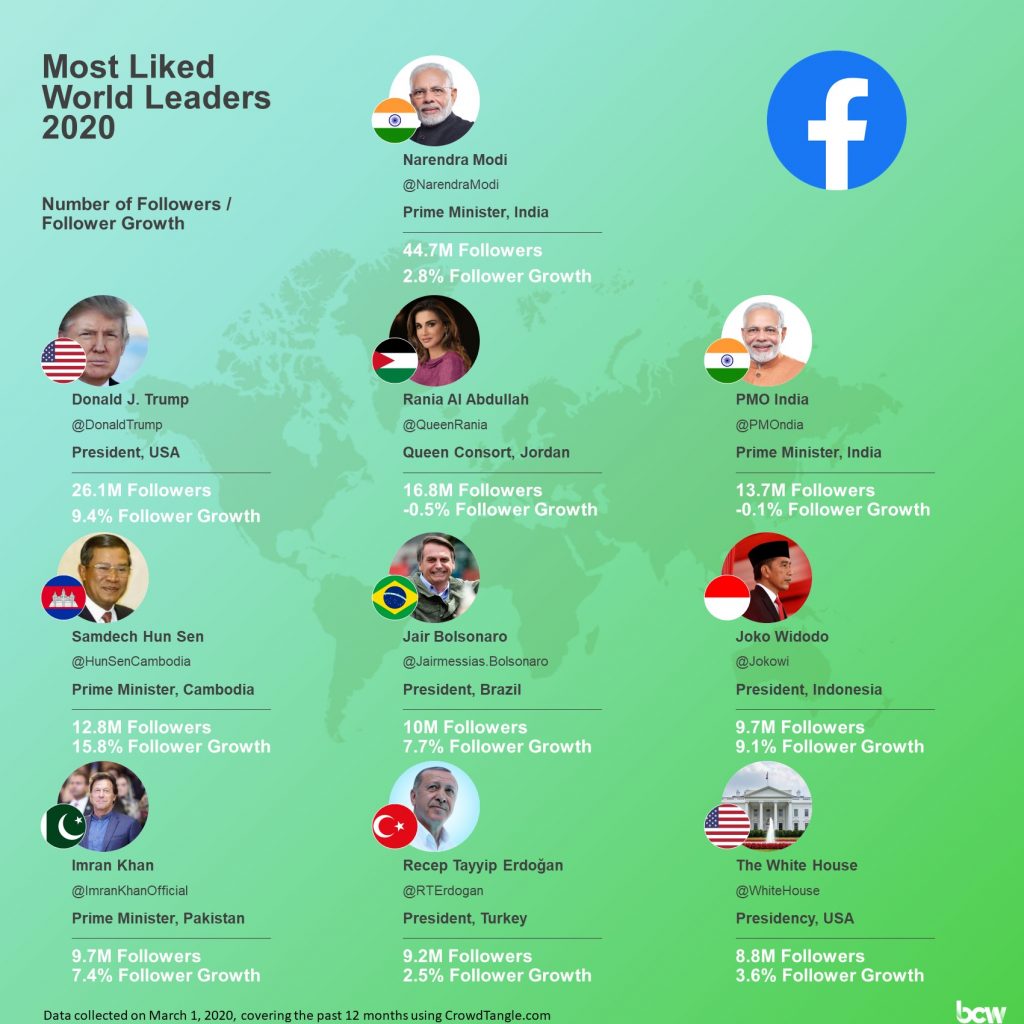 A surprise entry this year is the Cambodian PM Samdech Hun Sen at fifth position. His page has 12.7 million likes, almost twice as many as the country's overall Facebook users. According to the report, the leader's page has been heavily promoted in India and Indonesia with a budget of more than US$10,000 and as a result, has garnered more than a million impressions overseas.

This year's study also included the reach of leaders' posts with India's Modi only reaching 3.8% of his followers. Brazil's president Jair Bolsonaro scored high on this metre, reaching 956,000 of his 10 million fans while Trump only manages to capture 3.3% of his community.

Overall, the Facebook post with the most interactions over the past 12 months is a minute-long video showing India's Modi praying to Hindu goddess Jagdamba during the Navaratri festival. The video reached 1.7 million comments, likes, and shares, and is the most-watched video posted by any world leader at 21.1 million views. In fact, Facebook's top five posts with the most interactions have all been Modi's.

BCW's chief innovation officer Chad Latz, said: "The significant increase in followers of world leaders on Facebook is a logical result of two primary drivers, populations seeking definitive answers on the coronavirus issues and their country's definitive policy on managing the pandemic, but also the fact that studies are showing that time online generally has increased in some cases up to 36% and on Facebook more than 20%."